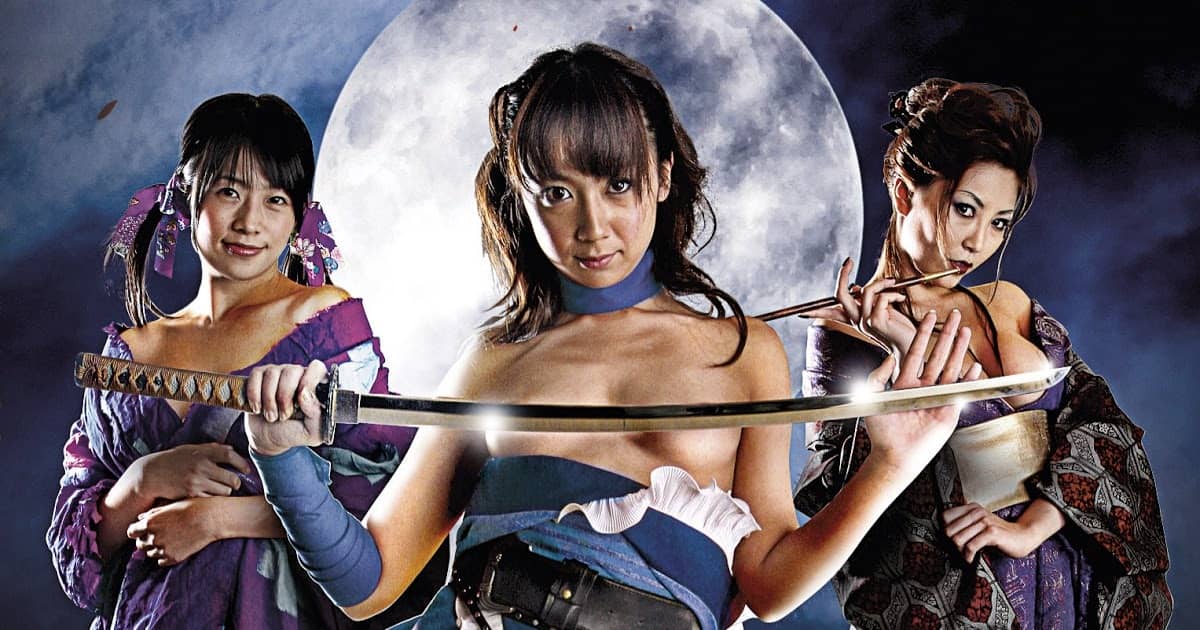 A woman travels back in time to 18th Century Japan, where she uses breast-enhanced samurai skills to defend a village…

From the creators of, but not to be confused with Chanbara Beauty or its sequel Vortex comes Chanbara Striptease, also released as Oppai Chanbara: Striptease Samurai Squad.   Directed by Akira Hirose, the film delivers pretty much exactly as expected, being a low budget slice of uniquely Japanese silliness that revolves entirely around the premise of topless sword fighting, spoofing the popular OneeChanbara videogame series. The film’s AV idol lead cast are certainly well qualified for such a challenge, including the likes of Sasa Handa (also in the excellent The Girls Rebel Force of Competitive Swimmers), Ryo Akanishi, Lulu Anoa and Mina Asa.

The film follows a young woman called Lilli (Sasa Handa), who on her 20th birthday is informed by her grandmother that she is to inherit her family’s mystical martial arts technique. During the ceremony, she is unexpectedly sent back in time to 18th Century Japan, where she stumbles upon a small village being menaced by an evil geisha and her unpleasant henchmen. Falling in with one of the local lads (Yoichi Matsuda), Lilli takes it upon herself to protect the villagers, armed only with her sword and the discovery that by baring her breasts her fighting skills are considerably enhanced.

Chanbara Striptease was originally released in Japan as Oppai Chanbara, which basically translates as ‘Breast Chanbara’, a fair and justified title indeed. The ‘Blades, Babes and Boobs’ tagline for the international release was equally fitting, and the film is certainly one which could never be accused of false advertising, as it basically hangs entirely on the scenes of Sasa Handa disrobing. Amusingly, the film doesn’t make much effort to try and justify this, with her supposed martial arts powers having no discernible characteristics other than her breasts emitting a weird video effect pink light that allows her to defeat her foes, presumably due to their being understandably distracted. She herself struggles to come up with a decent explanation as to why shedding her modesty is necessary, and upon being asked why she fights topless, she mutters a reply that for her it is like winter following spring, and day following night.

This gibberish actually sums the film up pretty well, and it makes for a lot of fun, at least for undemanding viewers looking for a little cheap titillation. Although it contains plentiful nudity, and one hilariously gratuitous, multi-position sex scene, the film is generally quite harmless and devoid of any sleaze or nastiness. Director Hirose is content to simply ogle his female cast rather than subjecting them to anything too degrading, and this also adds to the cheerful, almost innocent air. Similarly, there’s very little in the way of blood or violence, and the rather awkward fight scenes are brief and lacking in impact. There are a couple of moments of inspired madness, the most memorable of which involves characters using their breasts to wield swords during a duel, and this helps to keep things moving along quite nicely.

At just 65 minutes, Chanbara Striptease never outstays its welcome and passes the time painlessly. Though there really isn’t much to the film beyond its nude scenes, this should be enough to satisfy its target audience, and its sense of enthusiasm and harmlessness makes it far more enjoyable than other Japanese softcore genre outings.