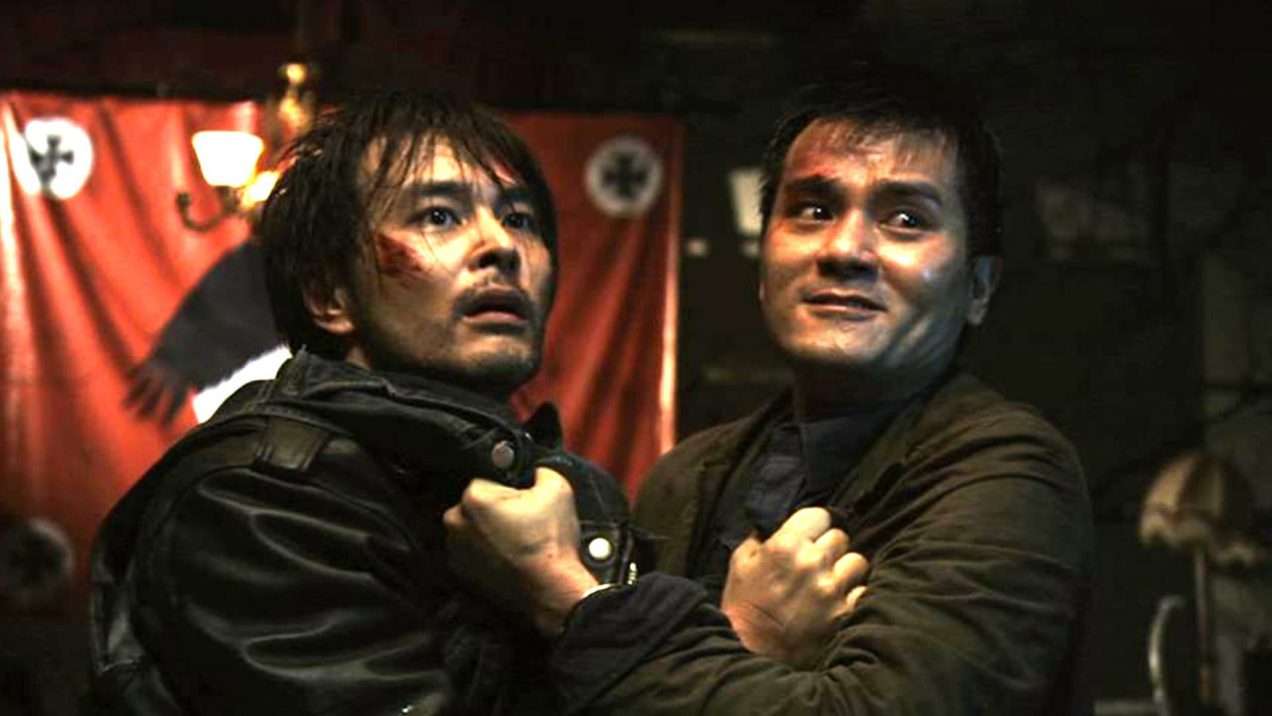 With Hong Kong genre cinema facing an uncertain future, now seems a pretty good time to look back at some of the works of Herman Yau, responsible for a long line of HK horror, action and exploitation classics, including the likes of The Untold Story and Ebola Syndrome. Yau’s 2008 Chaos is perhaps one of his lesser-known works of the last couple of decades, unfairly so, a fun, violent thriller with touches of John Carpenter’s immortal Escape from New York which is definitely worth tracking down.

Set in a grim future whose society is in disarray thanks to a mysterious disease epidemic, the film gets off to a bang as a car carrying a cop called Mickey (Andrew Lin) and his handcuffed prisoner Tai Ho (Gordon Lam) crashes through a wall and into a walled-off city which used to be a prison and which is now a cess pit of the very worst kinds of criminals. The injured men are grabbed by Crow (Alexander Chan), the brutal leader of the scum, and are immediately thrown into a battle to the death against each other as an innovative means of figuring out which of them is the cop.

Mickey is rescued by a woman called Ling (Crystal Tin), not out of the goodness of her own heart, but rather due to her desire to see Crow kill Tai Ho, who it turns out abandoned her and their young daughter Yan (Charmaine Fong) some years back. Ling agrees to help Mickey recapture Tai Ho and escape, though only after he reluctantly promises to take Yan with him to the outside world. Unfortunately, the titular chaos soon descends upon the city as the government sends in troops to kill everything in sight as a desperate attempt to eliminate the source of the virus.

Given Yau’s predilection for focusing on the darker side of human nature, it comes as no surprise that Chaos is a pretty dark and immoral affair, with most of the characters seeming to be hell bent on killing each other, or indeed anyone. With all of the scheming going on and all the past secrets and skeletons that come tumbling out of closets, it is hard to know who to root for, and the film never draws any clear line between its heroes and villains – if indeed there are any. There’s am effective vein of biting social commentary running through the film, particularly in its later stages, and it’s certainly interesting to look back at it now through the lens of current events.

This kind of nihilism is another of Yau’s trademarks, and although the film isn’t particularly unpleasant, at least in comparison to some of his earlier works, it does feature several scenes of violence against children, and a nasty misogynistic streak, with the two female leads spending most of the running time being slapped around or suffering sexual indignities. All of this adds up to a tough slice of hardboiled Hong Kong action, the likes of which has rarely been seen of late, and as such the film represents a welcome throwback, at least for viewers with a taste for morally dubious entertainment.

What is somewhat surprising is the fact that initially at least, Yau plays things slow, spending the first half of the film basically fleshing out his characters – there’s very little action until the second half, when things suddenly explode into life, quite literally in fact, as a number of the supporting cast unfortunately loose their heads. From this point on the film provides a rush of impressively visceral thrills, as Yau shows again that he’s an expert at grabbing the viewer and refusing to let go. His investment in the characters pays off, in a twisted sort of way, mainly generating interest as to which of the leads will meet an untimely fate, especially since it’s made abundantly and ruthlessly clear early on that it is very unlikely that they will all make it out alive.

The only real problem with Chaos is that it looks rather cheap, with the action quite obviously taking place on what was a small number of similar looking sets. Yau does well enough on what was doubtless a limited budget, though the proceedings do at times look somewhat shoddy and unconvincing. Thankfully, his direction is dynamic, and he keeps the film moving at a fast enough pace to distract the viewer, and as such the cracks don’t show too much, mainly thanks to his use of weird, lurid shades of pink and green. Still, although the ramshackle look could be kindly thought of as being in-keeping with the film’s theme, and it does add a certain down and dirty atmosphere, it’s hard not to be a little disappointed by the fact that the production values don’t quite live up to the ambitious setting.

Of course, it was never likely that Yau would have been given a big enough budget to really cut loose on a grand scale, and all things considered fans should still be grateful for Chaos as it is. Highly entertaining and pleasingly rough, although not as unfettered or dementedly gruesome as some of his best-known works, it again showcases him as one of the most dependable and edgy genre directors in the business, as well as being the kind of film which Hong Kong is sadly unlikely to produce many more of.