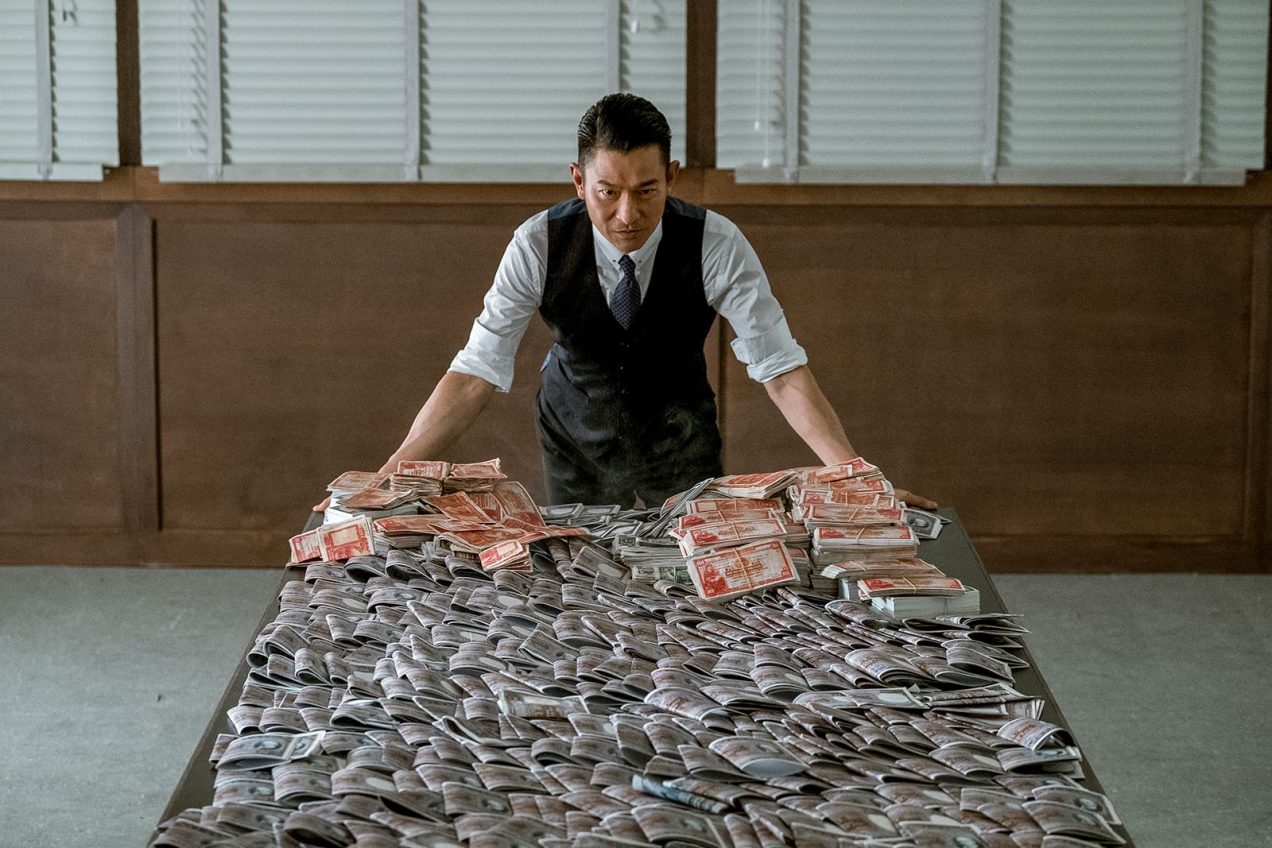 If the film’s title was a euphemism for catering to the China-market, it should be renamed as Tugging the Dragon…

But like most of Hong Kong filmmakers, the quality of his films has waned in recent years, although he has gained a resurgence in popularity in the China-market. Considering his commercial instincts, it’s not a surprise that started to cater to that big slice of pie, at the expense of reducing his already dwindling critical reception i.e Mission to Milano and From Vegas to Macau III.

And now we have Donnie Yen, who is definitely no stranger to catering to the China-market. He has grown exponentially in popularity due to his above-par martial arts skills and charisma over the past decade, with popular films like SPL, Flashpoint and others. But like all action heroes, time catches up with them and there’s only a matter of time where Donnie Yen decided to hone on in his acting chops and so far, it hasn’t been entirely successful.

With successes like Wu Xia and the Ip Man films, he has shown signs of acting potential, but in films like Iceman and Special ID, it basically torpedoes him back down again. So now we have Chasing the Dragon, a gangster film throwback that is the first Donnie Yen/Wong Jing collaboration since the 1996 horror schlock film, Satan Returns. Will the two succeed in becoming an entertaining film as well as a showcase for Donnie Yen’s acting chops?

Donnie Yen plays Ng Sik-ho (aka Crippled Ho or Limpy Ho), an illegal immigrant who came to Hong Kong in 1963 and gets by with his life with lowlife criminal activities. During one massive brawl with two opposing sides, Ho catches the eye of Lee Rock (Andy Lau), a corrupt policeman who sees his fighting skills as a valuable asset.

As the two cross paths again in an attempt on Rock’s life, the two collaborate in regaining the empire of Hong Kong, with Ho becoming the biggest drug lord while Rock climbs up the ranks of the police force. Little do they know what they eventually will come up against…

Like the title implies, let’s begin with the positives. Wong Jing’s regular cinematographer Jason Kwan makes his directorial debut here and he makes the film visually striking, lending the period setting some much-needed gravitas to compliment the ugly actions of the characters i.e. the drug use, the drinking, the fornicating, the fighting etc. 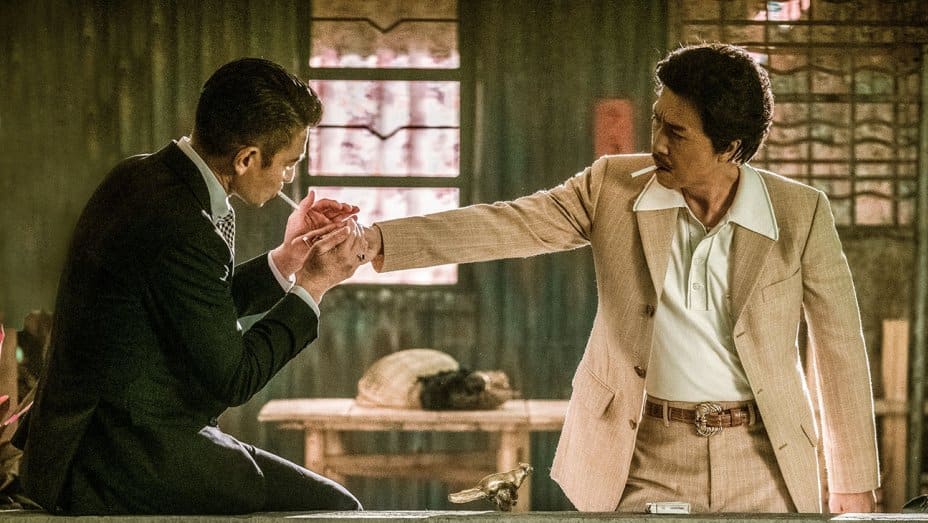 And while Andy Lau is credited as a guest appearance in Chasing the Dragon, he has almost as much screen-time as Donnie Yen does, and he provides his usual combination of charm and smarm to the role, but later in the film, he’s given a bit more to do and elicits a sense of menace that made his role in the Infernal Affairs films and Firestorm stand out, which is a welcome sight.

As for the action scenes themselves, which were led by Donnie Yen and choreographed by Yuen Bun (a veteran action choreographer) and Yu Kang and Yan Hua, both of whom are members of Donnie Yen’s stunt team. While they are not much of a martial arts showcase (except a brief one-on-one fight between Yen and Phillip Ng), they are well-executed brawls and shootouts that lend the film some excitement, if only in of itself, rather than complimenting the scope of the film.

And now we have the negatives, which are large in amount. First of all, supporting characters who are given very little to do in terms of backstory or agency (especially the female characters) are killed off in a supposedly dramatic fashion and it becomes blatantly obvious that director Wong Jing thinks we were meant to care for them (with the added syrupy music and slow-motion), but we don’t, and it only comes off as baffling and even unintentionally funny.

Speaking of unintentionally funny, the one big eyesore of a China-market trope is back tenfold. And that, of course, is the xenophobia. While of course, the British were involved in the time that Chasing the Dragon is set and they definitely did partake in criminal activities, the film however heavily implies that the British were responsible for the behaviour and actions that the Chinese did, particularly in terms of the main characters.

Not only is it a blatant ploy for catering to Chinese censorship to make the British more evil than the corrupt cop and the drug lord to make the Chinese characters heroes, it comes off as hypocritical, duplicitous and incredibly insulting to the audience, to think that they would go along with such a thing. There’s a scene where Yen’s character is lecturing his younger brother to stop using drugs while his brother calls him a hypocrite for selling them in the first place. No truer words have been spoken in the film.

And let’s not forget that in order to present how foreigners are in China-market films, it’s very much how an actor would try to give an Oscar-nominated performance but with the added amount of cocaine: talk with a funny accent and/or shout. Bryan Larkin, who plays the British baddie, Hunter, gives an impression of a human being as played by a war-hungry alien. His performance is so bad and so over-the-top that it would make cartoon characters hang their head in shame.

And speaking of over-the-top, let’s talk about Donnie Yen’s performance. For his role in the Peter Chan film, Wu Xia, Yen played the main role of a serial killer (or was he?) who decides to live in exile for a quiet existence. In the hands of Chan, Yen displayed subtlety, nuance and displayed his many emotions and side of the character convincingly.

However, in the hands of Wong’s direction in Chasing the Dragon and counting the desperation of trying to prove that he can act, Yen comes off as unintentionally funny and unconvincing. With many bad wigs (which the filmmakers clearly didn’t spend much money on) and trying to play a character much younger than his actual age (for the first act), it just comes off as funny. And when Yen tries to portray Ho’s outbursts of rage due to deaths of certain characters, he almost comes off as if he’s having a severe stroke that it’s hard for one to take any of it seriously.

Hell, the whole film comes off like that. It becomes incredibly exhausting and tedious. There are parts of the film that try to be humorous, but they only end up as laboured, with the lowest of the low being a tired reference to God of Gamblers. The climactic action scene even features Wong Jing’s typical plagiarism such as Donnie Yen using a shotgun and killing off people in the manner of Brian De Palma’s Scarface, but it comes off poorly in an attempt to be cool.

And cool, this film does not come off. Chasing the Dragon is a bombastic failure as a throwback to 90’s gangster films, as a Donnie Yen acting showcase and worse, as a Wong Jing exploitation film. The only thing the film ends up chasing down is its own tail.

Chasing the Dragon is released on UK DVD today by Well Go USA.