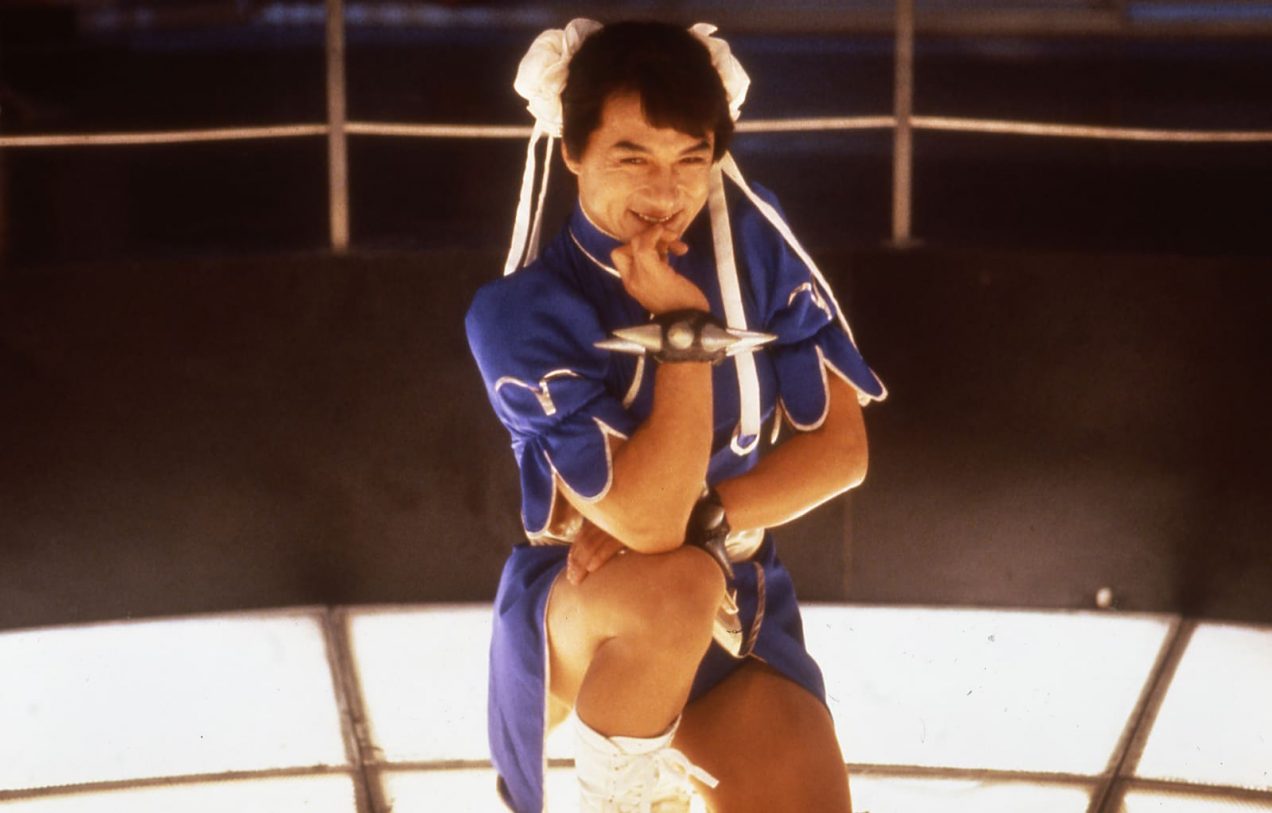 A cheesy topping a right cheesecake from chef Wong Jing…

Before watching Last Hero in China I wondered how Wong Jing would handle the material. Afterwards, I thought it was pretty ok, and that was after I was introduced to the first two movies in the God of Gamblers franchise, where Chow Yun-fat steals the show. But when I got to the From Vegas to Macau I was quite bored and not amused. I realised that Wong Jing concentrates on the cheesy jokes and slapstick humour, which most of the times goes overboard and that ultimately ruins the fun for me.

City Hunter is another example of his cheesiness taking the upper hand and which brings quite a different Jackie Chan on the table. Based on a popular manga/anime series Jackie plays a private detective Ryu Saeba who has to find the daughter of a wealthy newspaper tycoon, who escaped from home and her whereabouts are somewhere in Hong Kong. The daughter in question Kyoko (Kumiko Goto) ends up on a cruise ship, where the pretty assistant of Ryu Saeba, Kaori (Joey Wang) is enjoying herself in the company of her horny cousin, trying to make Ryu jealous. Obviously, there are some unspoken emotions between them, which never fully blossoms as Ryu is distracted by the rest of the females on board including Kyoko and the character of Chingmy Yau named Saeko as an undercover agent. Soon all the mayhem splashes on the ship as terrorists led by Colonel MacDonald (Richard Norton) seize it and held all passengers as hostages. It’s up to Ryu and his team to save the day as per usual.

The overall atmosphere in the film like that of a cartoon, or in this case the original manga, Wong Jing translates the tone and colour palette with ease and this gives way to his trademark cheesy humour which is especially visible in the Street Fighter inspired scene where Ryu and head henchman played by Gary Daniels stage a fight using Ken, E. Honde (to avoid conflict of interest with one of the sponsors Mitsubishi Motors, the producers change his original name from E. Honda), Dhalsim Guile and Chun Li. The movie has a whole range of weird (and often not very PC) characters as well, the above mentioned horny cousin, a parody character which resembles God of Gamblers (played by Leon Lai), a gay henchman (played by Ken Lo), two teen nerds and one unbalanced gold digger.

The structure of the plot is simple enough, without any convoluted sub-plots and twists, it is a straightforward affair from start to finish, but one where I struggled to find the Jackie Chan’s spark of ingenuity despite the fact that he was handling the action scenes. They were brief, to say the least. One in the cinema, where Jackie faced two huge African American fighters and beats them up via guidance from the legendary Bruce Lee in a clips from his last film Game of Death; a short one between Jackie and Gary Daniels in the room; then the rematch in the arcade hall and the final one with Richard Norton, where he was heavily doubled in most takes, as well as Jackie, but he was injured during the course of the film and was unable to perform certain moves from the action choreography.

Some of these fights worked for me, some of them not so much, it was too much of a comedy blended inside which ruined the martial arts tone of the scene itself. In the cinema fight, it was plausible and it was structured quite well, despite the quick cuts here and there. The first short encounter with Gary Daniels had good fighting timing, but was way too short for my taste, I think it could benefit from being longer. The rematch was not so bad, incorporating different practical effects and copied moves of the specific characters from the game itself, but it was off-putting when Jackie poses in the dress of Chun Li. Wong Jing obviously likes to insert LGBT oriented gags in his works, as seen in Pantyhose Hero with Sammo Hung. I guess in the overall environment of City Hunter, which originated from comic book it is ok, but it’s too much of a flavour, and thus diminishes the quality of the martial arts action.

The final bout was hit and miss, while seeing some nice interactions between Ryu and MacDonald, there were moments of obvious stunt doubles and that kind of lowered the immersion in the scene. Both of them are trained martial artists and while it was better staged than the miserable Mr. Nice Guy ending fight, I still think it was a missed opportunity. As a highlight, I could point out Leon Lai’s parody character with his card throwing trick was quite good, but the whole musical number somewhere in the middle was just absurd and didn’t help the story development.

The ‘gweilos’ Richard and Gary tried to put some comedic tone into their performances and it is commendable that they managed to convey it through their actions and words even, but if Wong Jing hadn’t blown the comedy bits out of proportion here I think it would have been a totally different cinematic experience. It was a different role for Jackie too, a flirting P.I. with some martial arts skills, surrounded by gorgeous women and looking for food until the end, the core of the whole experience was the jokes and I did laugh at Ken Lo kicking the hell out of Saeko’s dim-witted friend, but the rest of the tone was bland as a tasteless meal prepared by a trainee chef. It looked colourful, it resembles a cartoon/comic book, but apart from that I was disappointed, maybe I was expecting too much of this collaboration, which ultimately ends flat on his back, despite the talent of Jackie involved.

He was not happy with the final product and confronted the director about it publicly which led to the creation of a character named Frankie in 1995’s High Risk starring Jet Li. Jacky Cheung appeared as Frankie, looking like Jackie in a very negative way, portrayed as such under Wong Jing’s direction as revenge in the aftermath of City Hunter. After the film was released its claimed that Jet Li apologised to Jackie. There is honour among martial arts stars indeed. As for City Hunter, I found it to be better than Bleeding Steel, Kung Fu Yoga, The Spy Next Door, Tuxedo, most of his early Lo Wei efforts and other weak Hollywood productions, but it is far from his best work in his filmography such as Project A, Police Story, Drunken Master,  and many more, so it’s a balanced product I might add with all its peaks and falls.

City Hunter is available now on UK Blu-ray from Eureka Classics, with a host of extras.

The Eureka release of this film is taken from the 2K master and the image is quite clear, with a rich colour palette and compared to my old DVD it certainly looks significantly better. With a few exceptions where the image is in lower resolution and has a specific grain in close-ups and where some effects are in place (particularly in Street Fighter scene) the rest is solid video transfer from start to finish. The colour temperature is well balanced and even in dark scenes, there is enough contrast to give the objects refined look. In the sound department, I wish that the DTS 5.1 be more aggressive as most of the times the surround channels were weak and not too deep in comparison to the centre and front channels.  The bonus features are abundant and comprise archival interviews with Jackie, Wong Jing, Rocky Lai (member of Jackie Chan’s Stunt team), Richard Norton, Gary Daniels the latter being quite long and most interesting for me. It has also Outtakes section, a different song during the end credits and some promotional trailers and TV spots. Another great quality release from Eureka and I’ve added a whole star to my verdict just for this.