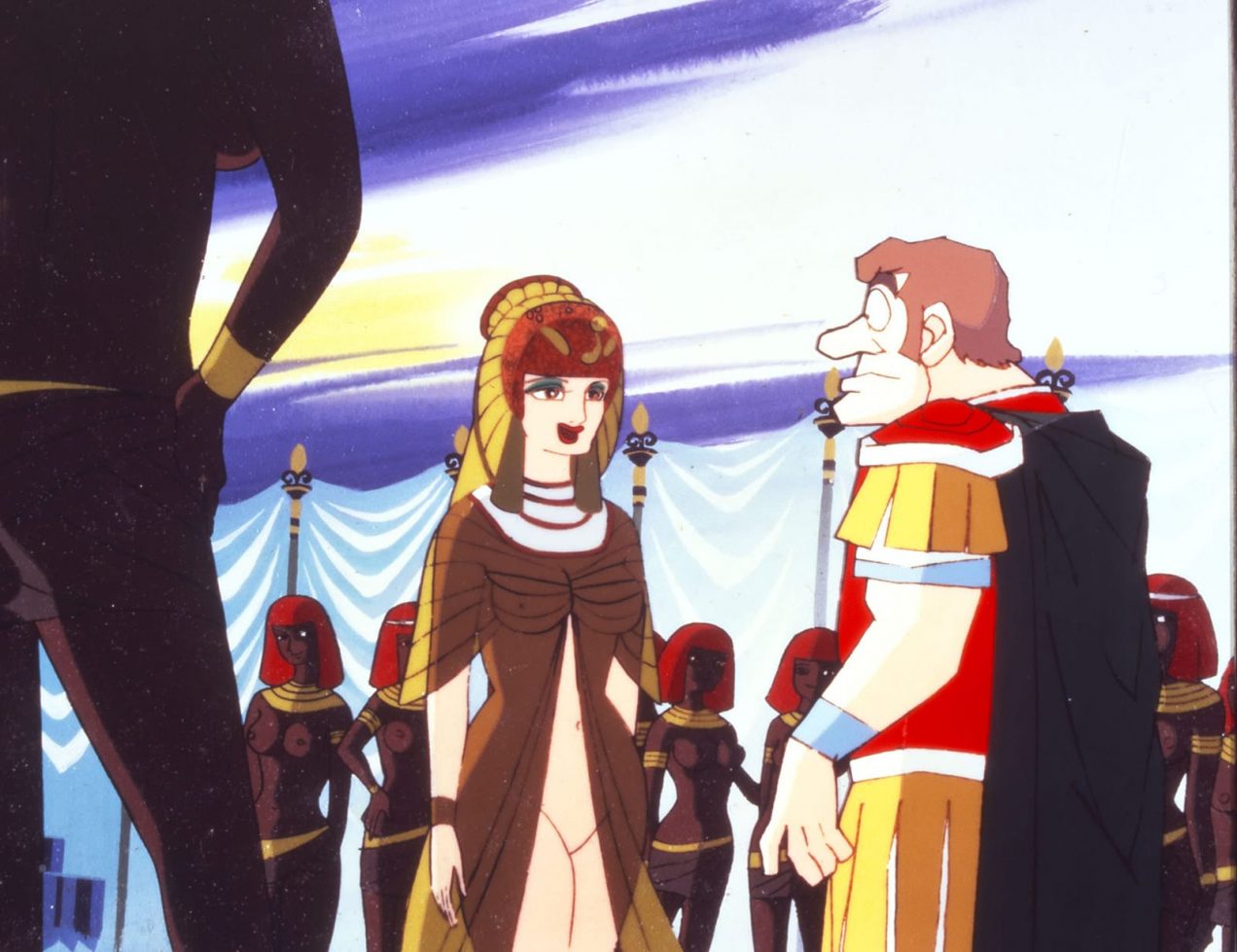 Smart, titillating and visually arresting. Tezuka’s commercial failure is anything but!…

In true Kubrick fashion, Cleopatra opens to a grand silence. I check my volume and my audio settings like an idiot. A spacecraft drifts across the blackness. A slow pan down to a planet; it’s earth. The camera floats down and dissolves into a city, a retro-future city, then we’re looking out of the front window of a flying vehicle. It’s here I notice that the dashboard is animated and the city isn’t. It’s a model, as was the spaceship. And I’m instantly hooked; a blend of live action and animation. Then it gets weird. Three stereotypically 60s spacemen, Lycra-clad, of course, walk down a corridor and into an office. They’re real human actors but they have animated heads.

Now well out of any comfort zone, I may have had as a fan of both anime and Tezuka, I await the main story’s set up. Whatever the hell it could be.

It’s the future, that much has been established, and Earth, as the much-decorated General in the boardroom explains, over champagne and soup, is in the process of colonising the entire universe. But there’s a hitch, an insubordinate planet, Pasatorine, is refusing to lie down and be ‘colonised’. Worse still, an enemy plot has been uncovered, code name: The Cleopatra Plan. Inspired by the famous Egyptian queen it’s assumed. Earth’s plan, then, is to send the crew back to ancient Egypt to work out what it could all mean, this Cleopatra Plan thing.

Admittedly, as plans go, it has some obvious flaws, but it’s what Earth are going with. Fortunately, they have an experimental time machine on hand, ready and waiting. Somehow it projects their spirit back in time to inhabit a predetermined host. When Cleopatra dies they should, probably (maybe) all return. Assuming, a: the machine works two ways, or b: it actually works at all.

So back they go.

One chap becomes a handsome slave of Julius Caesar, the other (hilariously) Cleopatra’s slinky pet tiger (it may be a leopard) and the lady, a prostitute. Lucky her. As their job is to gather intelligence the characters they inhabit have little control over events, their job is not to change history, just, like us, observe it.

Through a disparate series of outlandish set pieces, some violent, some funny, all firmly post-watershed, we follow Cleopatra’s doomed love life. From Julius Caesar via Antonius and ending, tragically, with Octavius. Elizabeth Taylor and Richard Burton it isn’t.

The first memorable scene sees (heroine?) Cleopatra moulded, literally, into a beautiful secret weapon. The Egyptian soldiers couldn’t stand up to the might of Rome’s superior force, as graphically portrayed in a scrolling montage of rape and bloodletting. It’s graphic but heavily stylised and one of the film’s many non-anime looking scenes. So an alternative approach to brute force was required.

Deep within a hidden chamber, an ancient sage gives an ‘ugly’ Cleopatra a potion which makes, her now naked, body all rubbery. He comically kneads away, spending an unhealthy amount of time on her breasts, and creates the mesmerising figure key to the rebel’s plan to strike back. Cleopatra has been trained in the art of seduction; to seduce and assassinate their leader, Julius Caesar.

Julius is seduced but Cleopatra has fallen in love and can’t bring herself to murder him, he’s not the vicious individual she’d been led to believe he was, despite his armies’ transgressions. Their romance is intense but short-lived as adulterous Julius soon returns to the embrace and familiarity of his wife. Cleopatra was just a fling.

Enter Antonius. Lacking the prowess and confidence of the former Roman, Antonius proves harder to get into bed. Cleopatra eventually persuades him, breaks through his low self-esteem, with two bananas and an analogy. She throws the large one into his mouth and asks him how it tastes, after nearly choking she feeds him the smaller, which Antonius admits tastes much sweeter. A message for us all there.

The two fall in love and all is well until Antonius is taken out of the picture by scheming Octavious. It’s then up to Cleopatra and team to save the day.

The overarching message in Cleopatra is that love conquers war. Octavius is an apt choice of villain; he’s a man who has no interest in women and is, therefore, unseducible by Cleopatra. He shows an interest in Julius’ slave, who you’ll remember is inhabited by one of the crew. I want to say that it’s his resistance to romance (or romantic sex) that makes him villainous rather than his sexual preference. Given Tezuka’s liberal politics of inclusion and equality (and anti-war stance) that can be seen in so much of his manga I’m going to read it as the former.

So Cleopatra dies, no real spoilers there, and the crew find out that, thankfully, the time machine does work both ways. The information they return with, that Cleopatra was defeated by simple might rather than diplomacy, leads the General to launch a devastating attack on Pasatorine. The last shot is of missiles heading toward the unsuspecting planet. Bleak ending. But on-screen text tells us that people from Pasatorine are already on Earth, the Cleopatra Plan already in motion, so perhaps it’s not too late for Pasatorine, and all it may represent, after all.

I loved Cleopatra (both the film and it’s leading lady). It’s far from a perfect film, the pace is uneven (to say the least), some scenes sag and not all of the slapstick humour hits the mark. But it’s just so unique. A one-off. The film feels far more European / Western than most anime I’ve seen. Outside of the obvious Disney comparisons, it’s a mixture of Yellow Submarine (1968) and Fritz The Cat (1972), with shades of Asterix, and that’s without the more avant-garde elements.

There’s a ton of cameo appearances both from Tezuka’s own catalogue (including Astro Boy) and from pop culture of the time, some I recognised, some I didn’t, and more 2001: A Space Odyssey references than you can shake a huge black monolith at. As well as the opening scene’s spaceship and silence, you’ve got a crewmember named Hal and a soldier playing a timpani drum on a Roman warship. 2001: A Space Odyssey’s epic narrative of mankind’s evolution is also echoed with the suggestion that Pasatorine’s love, not war philosophy will find it’s way into human society.

Those that are familiar with the godfather of manga’s’ work will recognise his unusual mix of clean, semi-realistic characters alongside amusing animalistic caricature. People are also a variety of surprising colours. Not just the normal human colours, like brown, but also green and red.

And pretty much every woman has her boobs out the whole time, guess the weather was hotter back then, leading me to describe Cleopatra to friends as Disney with tits. When my own copy, on Blu-ray, arrives it’s going to sit next to the French animated sci-fi oddity, Fantastic Planet (1973) or the handful of Lupin 3rd movies I own on DVD.

Sometimes a movie comes your way that is just so individual, the factors that conspired to make it so unreproducible. In their one-line description of the film, Wikipedia describes Tezuka’s sprawling epic as a commercial failure. Commercial maybe, artistic, never. Cleopatra is very Japanese and yet so European in influence. It’s less a narrative experience and more a sensory one. So sit back, enjoy the laughs, and soak up the ‘ban the bomb’ politics of the time.

Cleopatra is released as an Animerama double bill with A Thousand and One Nights on limited edition Blu-ray and DVD by Third Window Films from 18 June 2018.