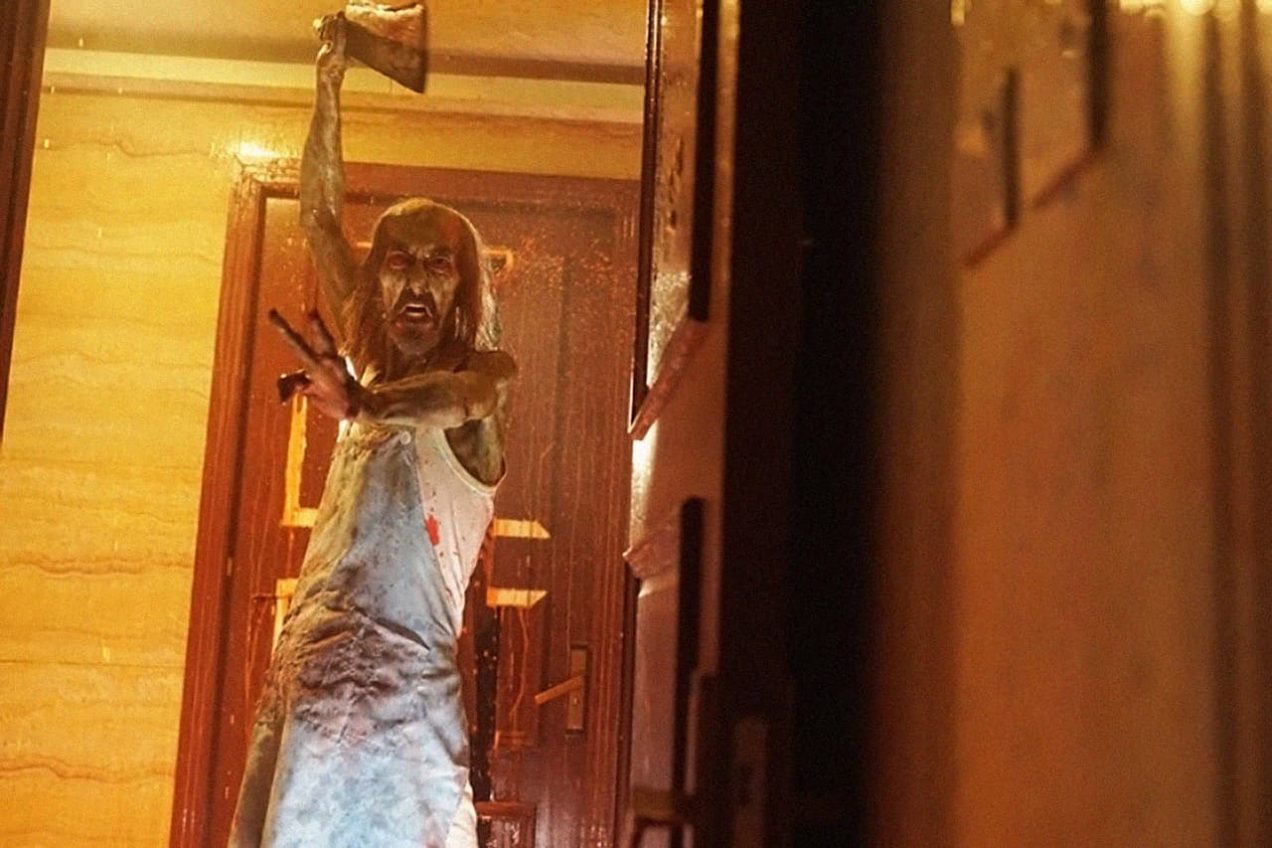 Take satire, mix in buckets of gore, add a heavy dose of social commentary, and you get… well, something…

Things get weird before the opening credits even roll. Reanimated grandmas, screeching guitars, rubber knives, and buckets of black blood – if you’re not onboard with Fruit Chan’s latest by the time Coffin Homes glides onscreen, then its next 100 minutes are not for you. The Hong Kong director is certainly a man of fresh ideas, and he fits as many as he can into this satire/thriller/drama. If only they all meshed just a bit better…

First, a bit of context: Hong Kong is expensive. Like, “Priciest Real Estate in the World” expensive. For the middle and lower classes of the city, this often leads to cramming into “coffin homes,” tiny subdivided apartments that house multiple families. Quality of life in these rooms is low, and overpopulation and income inequality have only exacerbated the problem in recent years. Fruit Chan, no stranger to satire, takes aim at this social crisis in his newest feature.

Coffin Homes straddles the line of an anthology film, dealing with numerous interwoven narratives connected by real estate agent Jimmy Lam (Wong You-nam), whose properties invariably involve a disgruntled ghost who pester/torture/kill their inhabitants. Naturally, these properties are offered at a steep discount. In the midst of market fluctuations in Hong Kong realty, Lam is tasked with filling as many apartments as possible, so these haunted houses have got to sell.

The resident ghosts are more than set dressing – they chat with the living, sign real estate contracts, and have their own distinct taste in movies. In other words, they’re basically extra roommates (albeit violent ones, at that).

While Jimmy is dealing with the ghost of a particularly bloodthirsty butcher (Paul Che), his father, Mr. Lam (Tai Bo), has a haunting of his own. The subdivided set of coffin homes that he owns is menaced by Lil’ Keung, the spirit of a little boy who died in the apartment. Lil’ Keung’s father refuses to take the ghost with him when he moves out, leaving Mr. Lam to keep the boy happy to avoid any murderous temper tantrums.

There are subplots upon subplots in this film, and to list them all would highlight the main issue with Coffin Homes: it tries a thousand different things, but they rarely come together into something greater. Chan’s disorienting editing (under the pseudonym Tin Sub-fat) flips the tone of a scene from one shot to the next – terrifying to sentimental, touching to slapstick. Characters will be in extreme danger one moment and giggling the next. Often, it feels as if they are written just to meet the needs of a particular scene (Che’s butcher comes to mind – in one interaction he’ll be Jimmy’s pal, and in another he’ll be coming for his head with a cleaver).

A few moments in the film remind viewers that this is the same director behind the brilliantly upsetting Dumplings (2004). Solid performances from the likes of Wong and Chelffy Yau come together with menacing lighting by Benny Chan to create nerve-wracking scenes like the butcher’s introduction. It’s a disappointment when that scene is soon deflated by silliness and the Halloween makeup that is caked on every ghost. It feels as if an 80s Category III shockfest underwent a cartoonish toning-down.

In general, the actors here do the best with the script they’ve been given. Wong holds up much of the film’s runtime with his dedication to meet the needs of every scene, which run the full emotional gamut. Tai Bo gives surprising nuance to what could have easily fallen into the “cheap landlord” trope in the hands of a less capable actor. Even minor supporting characters like noodle shop owners and realtors deliver reliable performances.

Chan’s satirical message may be undermined by tonal whiplash and some strange filmmaking decisions, but there is still fun to be had with Coffin Homes, especially for fans of over-the-top, well… anything. Keep expectations modest, and you will be rewarded with plenty of enjoyable gore, body horror puns, and a handful of respectable jump scares. Seeing this one with friends and a couple of beers would definitely help, too.

Coffin Homes screened as part of New York Asian Film Festival 2021, which ran from August 6 to 22.