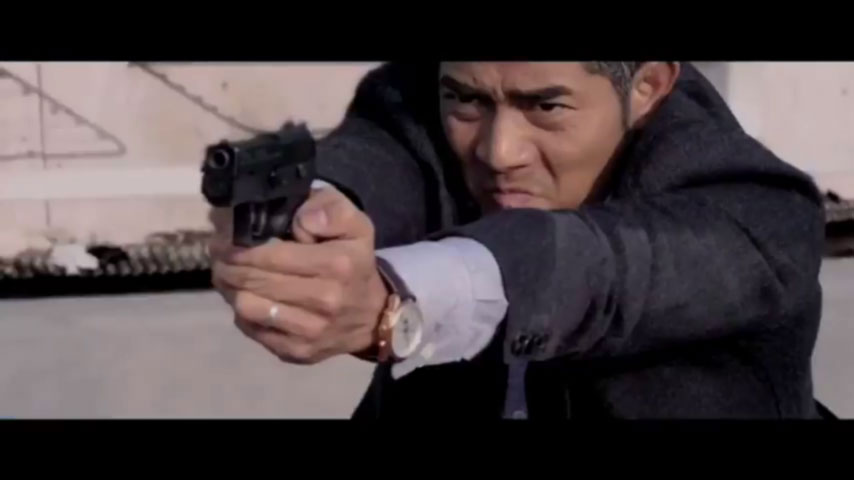 When a police van containing the Hong Kong police forces most sophisticated equipment and five highly trained officers falls completely off the grid, alarms are raised within the force’s headquarters. The perpetrators soon reveal their demands, including a hefty ransom, warning any delay will cost lives. The clock has started ticking…

With the Police Commissioner (played in fleeting cameo by Michael Wong, Beast Cops, Final Option) out of town, it’s down to rival deputy commissioners Sean Lau (Aaron Kwok, The Detective, After This Our Exile, The Storm Riders) and Waise Lee (Tony Leung Ka-fai, Detective Dee and the Mystery of the Phantom Flame, Dumplings, Zhou Yu’s Train, Double Vision) to take charge – if only they can agree on anything.

As Lee takes the lead, Lau begins to wonder if he’s truly able to do what’s best for the public, as his son is one of the officers taken. But as the investigation progresses, it soon becomes apparent that they are being manipulated in a much bigger game…

Right from the outset Cold War impresses with its busy storyline, glitzy photography and aerial shots of Hong Kong. Directors/screenwriters Longman Leung and Sunny Luk (Kim-ching Luk) obviously have their eye on bigger budget productions from Hollywood. But the pivotal difference here is the narrative is as much political as about action, giving a depth to procedure you’d hardly expect from an American film. It’s a difficult line to pull off, to balance the internal office drama against life and death situations; but one I’d argue they do very well.

It’s easy to see why Cold War has been a massive box office hit, and won 9 awards at the 32nd Hong Kong Film Awards earlier this year. You can see in the partnership of Leung and Luk successors to Infernal Affairs creators Alan Mak and Felix Chong; the film has similar pretensions to keeping one step ahead of the audience, and largely is more effective than many of Mak and Chong’s most recent films.

This film sure keeps you on your toes as to where the story might go next, but as a result it also lacks the humanity of their greatest successes, if only because the pace doesn’t allow it. In keeping with those comparisons to Infernal Affairs, the plot turns to the inevitable whiff of corruption within the ranks. (Sometimes you wonder if it’s possible to have a Hong Kong police drama without at least one officer being crooked. You know, for a change.)

Even some of the major characters get little screen time, leaving you wanting more of Chief Superintendent Phoenix Leung (Charlie Young, Seven Swords, High Risk, Ashes Of Time, After This Our Exile), Senior Superintendent Vincent Tsui (Chin Kar-lok, Heart of Dragon, Murderer, Shinjuku Incident, One Nite in Mongkok) and Senior Superintendent Albert Kwong (Gordon Lam Ka-Tung, Infernal Affairs, Election, Sparrow, Mad Detective). It’s clear from the writing and performances that all these characters have a history and life outside of the film, but it would be great to see more of that on screen. More disappointingly, without giving too much of the plot away there simply enough scenes between Kwok and Leung: the dialogue frizzles as they work off each other; easily some of the films highlights.

As a whole the cast does a damn fine job. Even guest appearances by the likes of Andy Lau, here as Philip Luk, Secretary for Security, do little to derail the proceedings. And teen heartthrob Aarif Rahman, still best known for his role in Young Bruce Lee (aka Bruce Lee, My Brother) and Echoes of the Rainbow, comes out well as corruption investigator Billy Cheung – an undoubtedly a profile raiser for this singer turned actor who’s made little impression since.

My biggest issue with Cold War is that it packs too much in to its typically Hong Kong lean running time. The narrative is just too busy to follow, and more importantly fully enjoy (though that might lend itself to repeat viewings). There’s confusion between whether events portrayed are fictional or not: opening titles point out it’s all fiction; while closing credits make it sound like a real case which brought about changes in procedure. A ‘post-ending’ sequence rather unpicks all the good work, leaving you with an unsatisfactory (lack of) conclusion that does little save open up potential for a sequel.

Those reservations aside, Cold War is a slick thriller that proves that Hong Kong has still got what it takes…

Cold War screens as part of the Terracotta Festival 2013 at the Prince Charles Cinema.