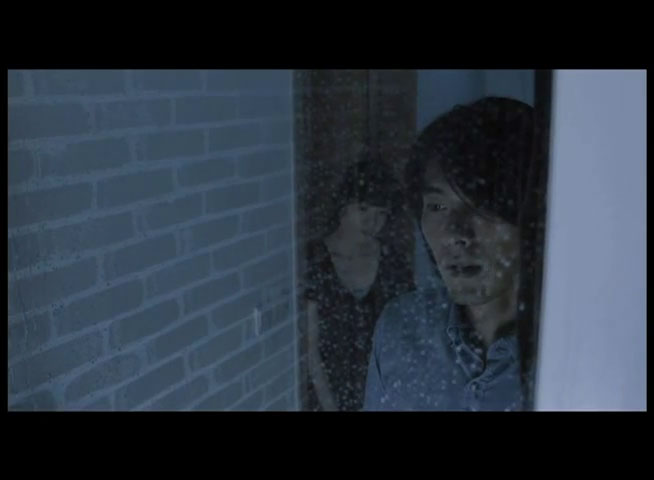 It might be water torture for some, or maybe just plain dull, but perhaps we ought to be thankful Lee Yoon-ki’s film exists at all…

Hyun Bin (Late Autumn, I Am Happy) and Lim Soo-Jung (A Tale Of Two Sisters, I’m a Cyborg, But That’s OK, Woochi) are a husband and wife on the verge of breaking up. Lee has announced that she is leaving Hyun bin for another man (voiced by an unseen Ha Jeong‑woo, My Dear Enemy, The Chaser, The Yellow Sea, in a cameo), frustrated that he seems unable to lose his cool, calmly helping her pack her belongings. But a massive rainstorm threatens to derail her plans.

Director Lee Yoon-ki’s Come Rain, Come Shine was the latest film in the Korean Cultural Centre UK’s Year of The 12 Directors events. It was notable that, other than E J-yong’s sublime Actresses, it was the most experimental and uncommercial film we’ve seen for the end of month screenings. (Though that will change drastically with the next month’s director Jeon Kyu-hwan.)

Funny thing is Lee definitely has his detractors. Presenting the film at the Q&A at the Apollo Cinema in Piccadilly Circus, London, he admitted that he had a reputation for boring films, and that this film was considered the ‘most boring of all’.

Right from the outset, Lee Yoon-ki takes his time by starting with a one long, nine minute take of the couple talking in her car as she, eventually, informs her husband of her intentions to leave. As with the director’s former work, he inhabits those awkward spaces, those lingering gaps in conversation that we so often try to fill. He follows the couple inhabiting the space, the rooms, while outside the rain keeps pouring down relentlessly.

You could argue he’s made a career out of it, but if his films lack editing and camera trickery they don’t lack skill in composition; they look beautiful, even if his celebration of the ‘mundane’ in day-to-day human habits is all-encompassing. He’s said to be influenced by independent American film directors of the 70s and 80s, and his like of the realist painter Edward Hopper really shows on screen.

It was interesting to hear him discuss at the Q&A how he shoots as if it were a play. Easily his work has much in common with plays, most of his films, with their small scale and intimate relationships between few participants, would translate well to the stage. So much relies on the actors’ performance; it’s clear to see why so many A-List stars are attracted to working with him, in the same way Hollywood stars might come to the West End or Broadway for limited runs; to be frank, it gives them a lot more credibility.

And it’s there this film comes a little unstuck. Teen idol Hyun Bin doesn’t seem so much calm as more concerned with looking beautiful in every scene. It could just be his age, but he seems to lack the depth of experience to really convince that he could have been married five years. Lee had explained earlier at the panel interview that he’d originally intended the couple to be older, and you couldn’t help wondering if this casting had been forced upon him. Technically Lim Soo-Jung outstrips Hyun Bin in every scene, and as one audience member told me, she’d have liked to take a pair of scissors to the fringe covering half his face.

I rather liked being forced to really watch. There are subtleties about director Lee’s work that require audiences to pay attention; he doesn’t rely on spoken dialogue to explain what’s going on (even if this film has more of a conclusive end than we usually see from Lee). For some reason I couldn’t shake comparisons with UK comedy programme Roger And Val Have Just Got In, in which Dawn French and Alfred Molina star as a couple who have, well, literally done that, preparing dinner in real time. Except without the laughs. In a good way.

(There was talk amongst the panel interviewers that a three-hour version existed, though I haven’t found any proof beyond the thought that it might have been a bad joke by a reviewer.)

Whatever the films faults, I still felt this had a lot of merit. Interestingly, despite not being one of the more commercial ‘crowd-pleasers’ we’ve had at these screenings for most of the events, the audience seemed more engaged with both the film and director himself than at previous events.

At the panel interview director Lee stated just how hard he found getting funding for the film, saying he felt that in the last few years it had got much more difficult. At the Q&A later he said, only half jokingly, that he worried whether we would be able to make a film again.

Over most of the screenings (and even in the last few years of attending the London Korean Film Festival) the amount of even vaguely challenging films is plummeting. And the banality of some of the commercial efforts in their place feels like a retrograde step.

We’ve had quite an interesting situation in South Korea. In little over a decade cinema has gone from experiencing true freedom from the last vestiges of government censorship to the reduction of the screen quote system, to the current state of affairs now, where investors are so heavily involved with screen output that any risk-taking is few and far between.

Lee Yoon-ki’s Come Rain, Come Shine almost feels like one of the last few flings of the true Korean filmmaking auteurs. That’s not a defence for bad movies (though I don’t think Lee has made any yet), but do we really want filmmakers to stop taking risks…?