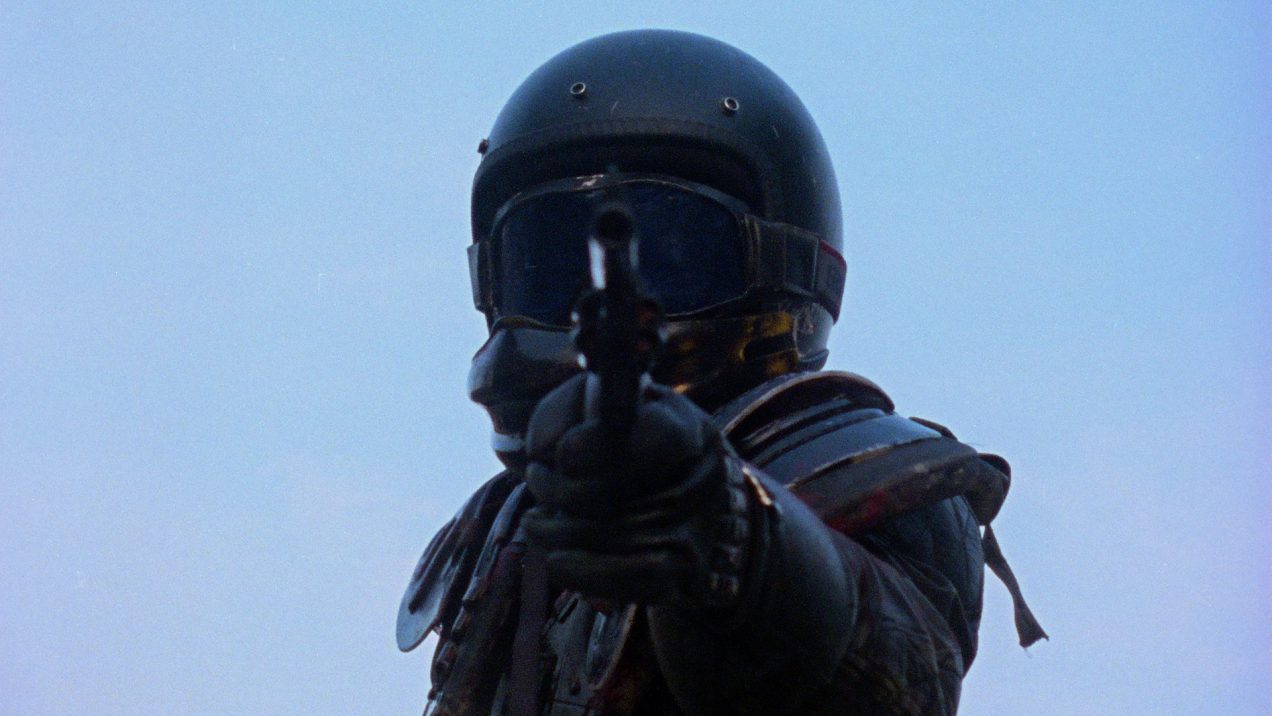 Although perhaps not as well-known as Shinya Tsukamoto, Gakuryū Ishii is an equally important and influential Japanese cyberpunk pioneer – in his case, with the emphasis firmly on ‘punk’. Originally directing under the name Sogo Ishii, he made his first feature Panic High School in 1978, funded by Nikkatsu after his shorts caught their eye, and then his second in 1980, Crazy Thunder Road, his 16mm graduation film, which was picked up by Toei and released in 35mm. Described by many as being Japan’s answer to Mad Max, the film has become an underground cult favourite, partly fuelled by the fact that it’s been very hard to get hold of in any kind of decent version – something which Third Window Films now rectifies with the film’s first home release outside Japan, in a newly restored version and coming with a collection of extras.

The film follows Jin (Tatsuo Yamada), who refuses to comply when the boss of his motorbike gang decides to disband the crew so that he can settle down with his girlfriend. Taking over the remains of the gang, the rebellious Jin leads them in attacks against their enemies, hell-bent on causing as much havoc as possible and refusing to play by underworld rules. After most of the others quit, Jin falls in with older military man Tadashi (Hiroshi Kaiya) and his paramilitary squad, who hopes to harness his violent exuberance for his own purposes. Unsurprisingly, Jin doesn’t take well to having a new authority figure in his life, and after receiving combat training he heads back to the streets to whip up more chaos.

Like most of Gakuryū Ishii’s works, Crazy Thunder Road isn’t a particularly straightforward film, and though the Mad Max comparisons aren’t too far off, viewers expecting non-stop bike chases and crashes should prepare themselves for something a bit more experimental. Though the film is certainly energetic and does have its share of action scenes, these come mainly at the start and towards the end, with the middle section being more meandering, following Jin as he hangs around with the paramilitaries, resulting in some admittedly amusing training sequences. The film doesn’t have much of a traditional narrative, and like Jin himself is more concerned with outbursts of anger and decision making that’s driven mainly by an enthusiastically self-destructive need to stick the middle finger up at authority no matter the cost.

As a graduation film made with this spirit in mind, Crazy Thunder Road is understandably rough around the edges, though Ishii’s direction and the production, in general, are amazingly creative, from the costumes and awesome soundtrack through to the fantastic and often quite violent action set pieces. While the story lacks focus, Ishii nevertheless keeps the film moving at a fast, at times dizzying pace, even when it’s not going in any particular direction, working in an impressive range of visual styles and editing techniques, and it does feel very much like an underground music video in places.

The visuals benefit greatly from the restoration, which comes from a new master approved by Ishii himself, and anyone who has only seen the film in a previous version will definitely be impressed – thankfully, though the film looks considerably clearer and has more vibrant colours, the restoration still retains its grungy, grainy feel. In terms of extras, the Blu-ray comes with a new interview with Ishii, a commentary by Tom Mes and a video essay featuring Jasper Sharp discussing jishu eiga, low budget films from filmmakers like Ishii made independently of the Japanese studio system.

It’s great to see Crazy Thunder Road being made available, and the visual upgrade makes the Blu-ray release well-worth it for Gakuryū Ishii fans and for anyone with an interest in Japanese indie genre cinema. Though not always an easy watch, it’s nevertheless an enjoyable, high-energy slice of punk chaos, and an especially impressive achievement as a graduation film made with limited resources.