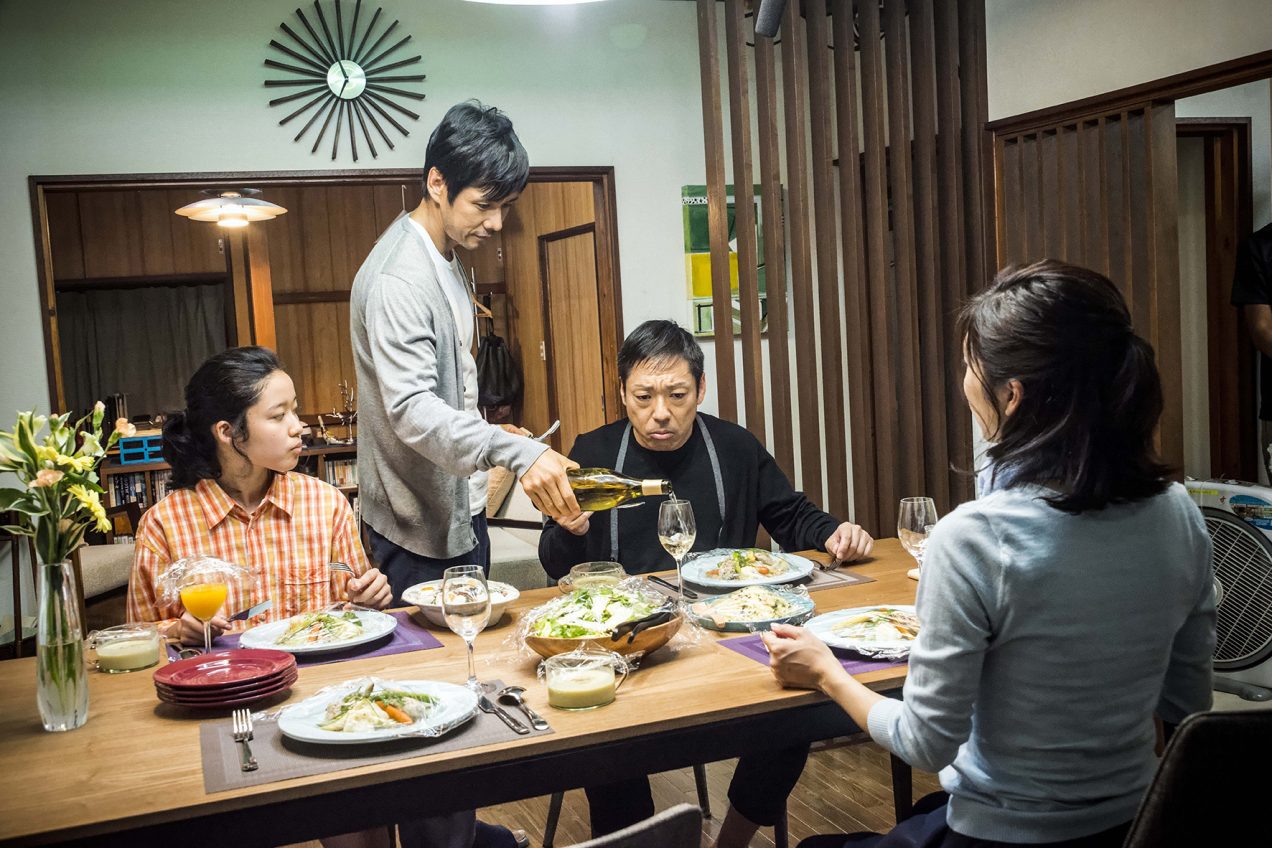 There is usually some air of mystery to a thriller. Whether a film is searching for the the ‘how?’, ‘who?’, or ‘why?’ is usually established early on and the uncertainty interacts with the onscreen action to build tension and achieve the primary purpose of the film: to thrill the audience.

Kiyoshi Kurosawa usually deals with pure horror, rather than thrillers (occasionally branching off to make domestic dramas), which are inherently different things. In the film Creepy he seems to set out to make a thriller, but forgets that this genre requires less suspension of disbelief and far more explanation than its horror film brethren, leaving the viewer somewhat confused as to the reason for the occurrence of any and all events in the film.

We follow Koichi Takakura, a former criminal psychologist who now works at a university. He moves into a new house with his wife Yasuko, and quickly find the neighbours to be insular or just plain bizarre, one of whom is the instantly suspicious Nishino. As Yasuko spends her day dealing with the confusing advances of Nishino, Koichi is convinced by a former colleague to help him with a murder case that has been cold for six years.

If you’re wondering how these events fit together then allow me to explain with one simple adverb: clumsily. One can tell early on that all of the plotlines are linked but by the time that anything is revealed, all of these connections feel deeply tenuous. A good thriller script should end with the viewer feeling emotionally drained, but nonetheless enlightened as to how all the pieces fit together. There are so many missing pieces of the narrative in Creepy that in the climactic scenes, every revelation feels anticlimactic and confusing.

There is an overriding feeling that Creepy throws multiple ideas at the wall until some of them stick, as the middle section of the film has the cold case from six years ago interacting with Koichi’s domestic life deftly and terrifyingly. As Koichi gets more desperate when interviewing subjects, we see the interactions of Yasuko and Nishino seeming to take place in a much more mundane fashion. When Creepy juxtaposes these with such a clear understanding of how to get under the audience’s skin, one can’t help but admire it, but the tightly coiled tension unravels untidily in a denouement that can only be described as horrendous.

Of course, I do not seek to spoil anything, but Creepy has few huge twists and reveals so I feel comfortable in saying that in the last third some unexplained substance that causes acquiescence enters the fray as a brand new plot device. There is no indication it exists before then, we are never told what it is, and it is on this that most of the climax hangs. It feels like Kurosawa wanted to make a thriller based around the admittedly intriguing character of Nishino but could think of no adequate way to resolve it, and as a viewer I felt more than a little cheated.

Despite my qualms with how the film deals with the script overall, Nishino does strike me as a figure worth making a film about. In all honesty the scenes with him and Yasuko are consistently rather frightening as he hovers in that liminal space between friendly and predatory.

A scene when he brings his daughter, Mio, over to learn how to cook is possibly one of the tensest scenes in the film, if only because it is here that he seems the most like a regular neighbour. That is, before he goes into a dark room with Koichi to admit to him that ‘sometimes he has to get his hands dirty’ and then leaves with Mio, both of them laughing jovially. Teriyuki Kagawa does such a fantastic job in this role that it is all the more disappointing that all other characters amount to nothing.

Furthermore, the way that the film telegraphs events started to bother me. To return to my initial point, any mystery surrounding the ‘how?’, ‘who?’, ‘why?’ is either non-existent or not resolved. We can tell from the first time we see him that something is strange about Nishino but no closure is given on this. Characters moving between the well lit and the shadowy areas of the rooms depending on the topic of conversation feels like the most basic symbolism too, to the point when it is not worth analysing, it feels like the film desperately cloying at the viewer to notice how smart it is.

By the end I was through with being annoyed with the film’s narrative ineptitude and found myself getting more and more agitated by how the camera always seems to be moving. Almost every shot seems to dolly and pan in some way, and the distinct lack of static shots meant that the film was never able to take a break to allow the viewer to take in what was happening.

And yet, this restless camera belies the slow moving plot. Though it is hardly mammoth, stretching to only 130 minutes, many scenes felt superfluous, in aid of characterisation that it never found. The fact that so many scenes felt pointless isn’t helped by the fact that so much of the film feels unresolved. It leads me to believe that I am missing something, but I can’t for the life of me think what it may be.

An understanding of genre is a wonderful thing. Maybe Creepy would have worked better if it had been able to rebrand itself as a horror film and shift some of the plot themes accordingly. In its current state, it feels like it wants to be a tense thriller, one that makes the viewer feel unsafe in their own homes.

Interesting as some characters are, and effective as it is in some fleeting moments, I can’t bring myself to give any form of recommendation for Creepy. There is too much missing and too many jumps in logic for the narrative to feel coherent. Sometimes frightening, always confusing, I would probably give Creepy a miss.

Creepy screens as part of 17th San Diego Asian Film Festival 2016, running from 3-12 November 2016. It will be released in selected UK cinemas by Eureka Entertainment from 25 November 2016.