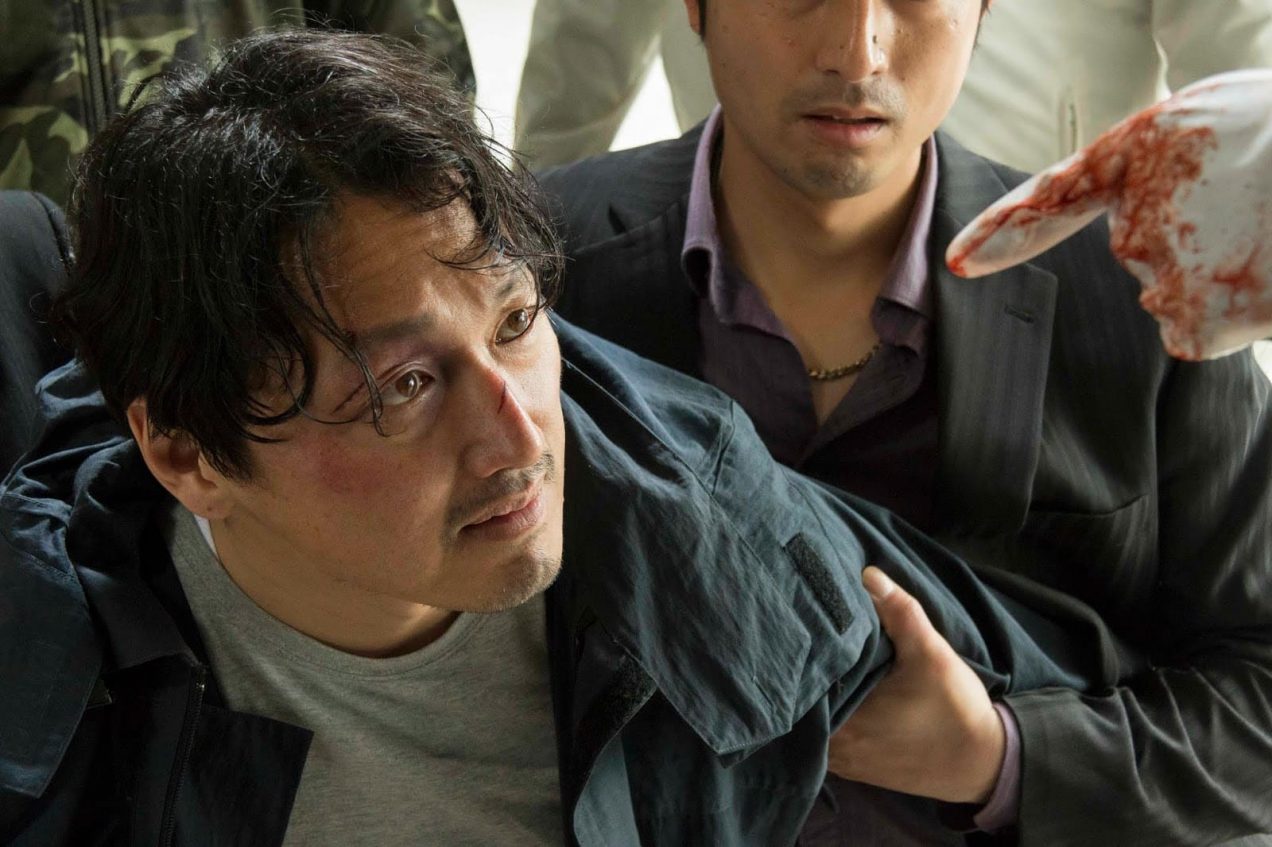 Doubt is everywhere, even in the audience, in this tightly wound tale of revenge…

Is the revenge trope overplayed? Should it be retired for a few years so that when it returns it’s like seeing an old friend again? After Oldboy was released, did we need any more films about taking revenge on those responsible for sending you to prison for a very long time? The answers will differ from person to person but there has to be a limit to the number of hard stares into the camera and plot twists that viewers can be expected to stomach.

Cyclops is a revenge film in the very purest sense of the word. Shinohara is imprisoned for 14 years for the murder of his wife, which of course he claims he didn’t do. Detective Matsuda is sympathetic to his case and when Shinohara is released, helps him to contact someone who can help him take revenge on the gang that were allegedly responsible for the murder.

It’s as good a premise as any, I suppose, and the film doesn’t dawdle in getting to the point. Within 10 minutes, Shinohara is out of prison and ready to crack some skulls, after some meticulous planning, of course. The breakneck pace runs throughout the film, but one never feels as if they are being left behind. Director Norichika Oba understands that, in a plot so reliant on details, the worst thing it can do is get bogged down and start to drag its feet.

As well as being constantly in motion, another novel way that Cyclops ensures you keep watching is in a minute but inventive plot detail: Shinohara was horrifically drunk on the night of his wife’s murder and as such is unable to confirm definitely whether or not he is innocent.

Having a character doubt themselves in a situation such as the one presented in Cyclops manages to breathe some life into what could have been a by the numbers story. If one were being cynical they could say that this is Cyclops’ gimmick, but it’s much fairer to commend the screenwriter for giving us an intriguing premise to sink our teeth into.

This goes in tandem with Shinohara seeing ghostly visions of his wife, leaving us wondering whether this is merely a symbol of loss, or a symbol of guilt. The ghost form of his wife does look like she’s out of a budget horror movie though, and it seems unnecessary to use as much CGI as they do on her. The slightly comic appearance rather lessens the emotional impact of what could have been some touching scenes.

Something which does nothing but add to the emotional weight is the performance of Mansaku Ikeuchi (Villain) in the role of Shinohara. It’s a snarling, intense performance which occasionally relies a little too much on volume, but otherwise grasps a deeply nuanced character who is often feeling at least four extreme emotions at once and is trying his best to keep all of them in check.

The supporting cast are mainly just filling roles and space, and aren’t given the same level of complexity as Shinohara, but Yu Saito is fairly entertaining to watch as someone affiliated with the Zaizen gang who are said by Matsuda to have killed Shinohara’s wife. He has big facial expressions and a pretty volatile character, so there is nary a dull moment when he is around.

It’s a shame that the rest of the characters feel so blank, because it means that we are left with a fantastic protagonist who can do little more than float through the world and interact with things as best he can. He tries very hard to interact with a painting of Galatea and the title cyclops in a bar run by Haru, a woman who is under the thumb of Zaizen and his gang.

A lot of time is spent mulling over the implications of the image, whether the cyclops can even remember what it is looking for anymore, and which characters in the film represent which characters in the image. This feels utterly non-essential and Oba is far too keen to get the audience to partake in this game of guesswork and blindly linking things together because they happen to be in the same room.

The film would have been improved by not forcing its own symbolism in the face of the audience, and instead allowing it to be present in the background, whilst the plot kept moving. It would be perfectly introspective and interesting on its own merits, but at too many points in the film, one feels like Oba is worried that the audience won’t take the film seriously enough.

The flaw that feels the most detrimental, though, is that for all the good pacing and great premise that the film has, towards the end everything aside from these things unravel somewhat. Plot events begin to happen at complete random, the camerawork gets jittery, and everything is just covered in an uncomfortable level of melodrama. It doesn’t spoil what has otherwise been a fantastic film, but it does make one wonder what could have been had there been a better ending and the film had generally stayed more focused.

The thing about faults such as these, though, is that another viewer may have no problem with the ending, they may grasp exactly what Oba is aiming for with his cyclops analogy and think it is a work of genius. Though they made me enjoy the movie less, they are still minor and you shouldn’t be put off seeing what is, for the most part, a great addition to the revenge film canon.

Cyclops is incredibly tightly coiled, but it hardly jams at all. It’s decently written, brilliantly performed, and it’s a shame that it falls apart when it realises it has to conclude. It is at its best when it’s ratcheting tension, sowing the seeds of discord in viewers, and allowing Shinohara to be the interesting character that he is. It’s a great film, but it may be better not to bother at all with the final twenty minutes, that way you need never stop pondering the mysteries that the film presents.