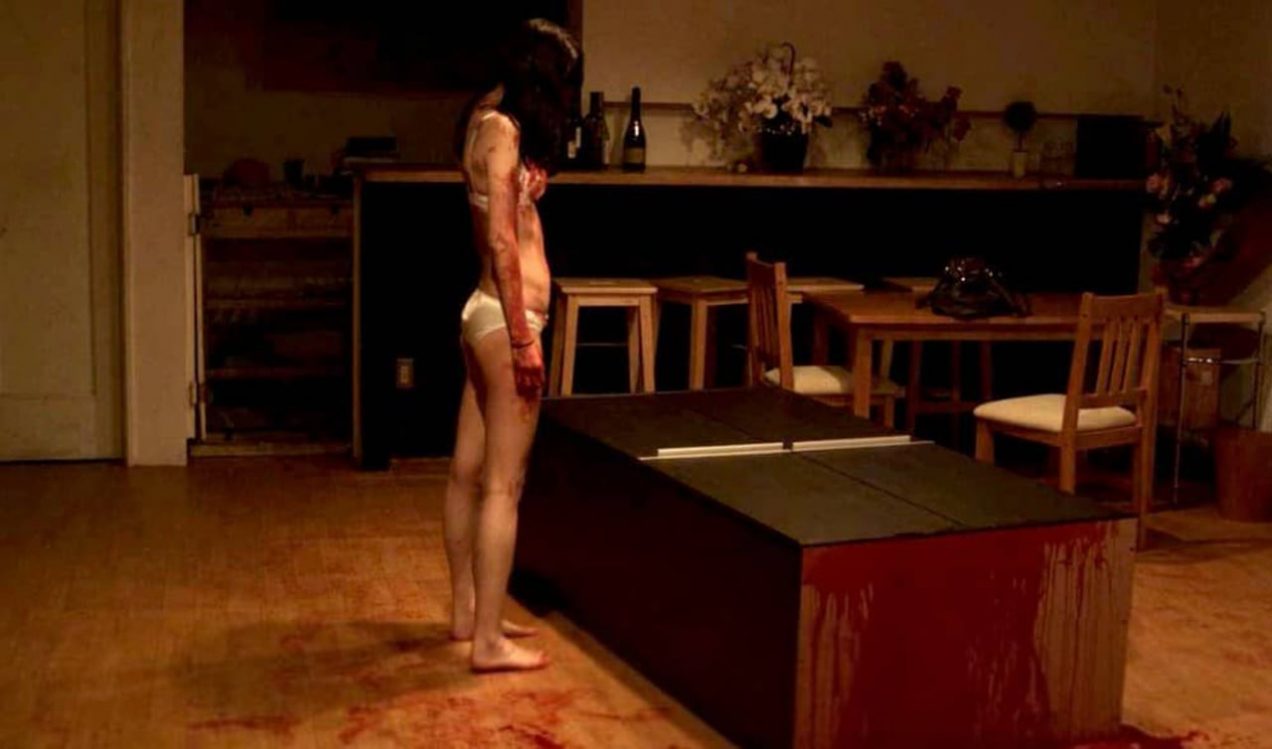 Winner of the Best Horror Feature Film and Best Actress (Megumi Hatachiya) at the 2016 Tabloid Witch Award Winners, Dark Side of the Light is based on an actual murder that took place in 1996, in Shibuya, Tokyo.

The film starts with Takumi Toyonaga visiting his ex-girlfriend, Emi Kinoshita, to inform her that her older sister, Tomomi, has disappeared after murdering her husband, Kohei Tanaka. The story then starts moving in a flashback, as Takumi explains the relationship of Tomomi and her husband, Kohei, who is also Takumi’s best friend, and his involvement in the case.

Through his narration, which is presented in acts, a terrible story is revealed, that Emi, and everybody who knew the couple, had no clue about. Tomomi and Kohei met at a singles’ party, and immediately became a couple. Soon, though, she became pregnant and the couple had to get married. However, Kohei had lied about his situation, and he is actually unemployed. As Tomomi starts pressuring him to study in order to get a job, he reveals another self, which is more violent and abusive than Tomomi ever imagined. Takumi, who has been in love with Tomomi for a long time, gets involved when he learns of the continued abuse she is suffering in her husband’s hands. However, when the true nature of Tomomi is also revealed, violence escalates even more.

Ryota Sakamaki makes a clear comment regarding abuse and domestic violence, as he reveals that both husband and wife have been subjected to abuse when they were kids: Abused individuals eventually become abusers themselves.

He also makes a great work of building the amount of violence depicted on screen, as the initial slaps quickly become punches and kicks, and after a point, Tomomo is constantly witnessed with bruises covering her whole body, at least when she is not bleeding on the floor. In this, quite graphically depicted fashion, the film transforms from a social drama to a thriller-horror with exploitation aesthetics. This transformation finds its apogee in the finale, which is much reminisced of Miike’s Audition, although not as grotesque.

The build-up is particularly elaborate in the case of Tomomi, who starts as a very beautiful, but bossy woman, then becomes something of a schizophrenic, to end up as the ultimate femme fatale. In that fashion, three questions arise and actually shape the nature of the film. Was she like that to begin with, or did the circumstances turned her to what she became in the end? Were her actions the consequences of hate or love? In the end, who was the actual victim?

The concept of Tomomi benefits the most from Megumi Hatachiya’s (The World of Kanako) performance, who manages to portray elaborately all of her character’s transformations. Shugo Oshinari is also very good as Kohei, the abusive, sociopathic man, in a very difficult role that has him constantly acting violently. Takashi Nagayama as Takumi has a secondary but crucial role, and he definitely succeeds in his “mission.” The scene where Tomomi lashes onto him and he reacts violently is probably the best moment of his performance.

Most of the film takes place in a single room, where the closet plays the role of the sanctuary, although to no avail. Nevertheless, the cinematography of Koichi Furuya presents some beautiful urban images, with most of them appearing in the intermissions between the acts. The film is entirely shot on digital camera, but this actually seems to fit its general aesthetics, and even heightens the shocking element. The editing is also good, as it keeps the rather fast pace of the film going. The concept of the different acts also works fine, functioning as an intermission to the rather hard scenes. Lastly, a great job has been done on the special effects, with the consequences of the abuse looking very realistic. The sole issue with the technical aspect is the music, which occasionally sounds too simplistic.

Dark Side of the Light is a meaningful thriller-horror film, which can be hard to watch at times, but will definitely appeal to fans of the genre, who will also discern its actual meaning, through all the violence.

Dark Side of the Light opened in cinemas in Japan 3 December 2016.