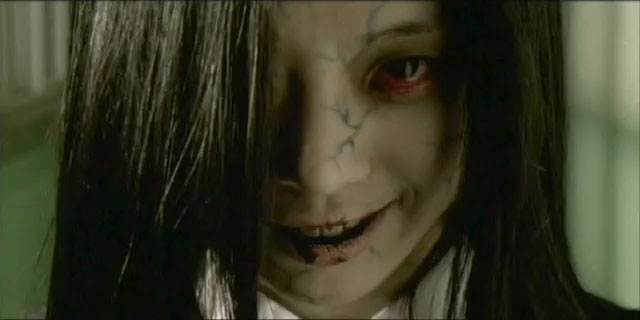 (Try as I might to avoid it, this review may contain spoilers… You have been warned!)

As the brightest students of an elite school cram for a test against a top foreign (Eaton!) school over the weekend, they don’t realise that most of them will not make it out alive. The students find themselves plunged into a deadly test where they are picked off one by one and held in impenetrable traps where they must rely on the intellects of their classmates to be released, every time a question is answered incorrectly, a classmate meets their torturous, grizzly death.

When it emerges that the students are being picked off according to a pattern, pupil Kang Yi-na (K-pop star Nam Gyuri in her film debut) discovers how much time she has to stay alive, and solve the puzzles to unmask their vicious killer, before the Death Bell rings for her. Even University Challenge’s Jeremy Paxman isn’t usually this harsh…

In the first few minutes, director Chang seems to reference opposite ends of Brian De Palma’s Carrie, with dreamed resurrection of schoolmates followed by an embarrassing menstruation in a girl’s dorm. He lets you know he’s seen an awful lot of horror films, and has no problem referencing them, but does so in a way that doesn’t interfere with the flow of the narrative. The title cards that appear just after each death echo the method used in Takashi Shimizu’s Ju-On: The Grudge series. For a director compared with the likes a Spike Jonze and Michel Gondry for his music video and commercial work, his direction is solid, but rarely breathtaking or original.

Intriguingly the conclusion, with threats of a mass explosion wiping out an entire assembly room of pupils, bears a great resemblance to Tetsuya Nakashima’s Confessions. Indeed, in both the teachers are much more at the centre of the narrative than you might normally find in such films, more than likely just a reflection of both cinema audiences in Korea and Japan being less willing to aim them solely at a teenage audience. (And perhaps both filmmakers find just concentrating on teenagers less interesting?)

Confessions, of course, came later, but the comparison does Death Bell no favours, lacking the same originality – let alone scenes such as the breathlessly intense first half hour. Chang keeps the taught, quickly cut filmmaking from cutting his teeth in commercials and music videos, not letting the film step over the 90 minute mark so often found in horror films (particularly those from Korea).

And yet I find myself agreeing with Kyu Hyun Kim’s (Koreanfilm.org) comments that this film seems to flip from grippingly offensive to rather tepid in equal measures. At his best Chang keeps the action moving along, but some scenes lack that vivacity – a scene where pupils sneak off to go clubbing make it seem as tame as a church run disco.

Chang’s magpie like fingers seem to be everywhere and of course one major point of reference is the very J-Horror like Whispering Corridors series. Oddly these supernatural elements don’t gel as well as the more grisly guts and gore of the hands on torture scenes. Chang never pulls them off as well as, say, Hideo Nakata or even Hong Kong’s Pang brothers, for the main part well over playing them where subtly would have kept the atmosphere much creepier.

What Chang fails to do well in his brevity is make the students at all sympathetic, not even leads Nam Gyuri, who does well in her first role, or TV drama star Kim Beom (East of Eden). In fact Chang’s sympathies seem more concerned with the teachers (which admittedly turns out to be deliberate) with Yoon Jeong-hee (not the same actress of Poetry!) making a strong impression in the role of So-young, even if much underused, along with Lee Beom-soo as Hwang Chang-wook (The City of Violence, One Fine Spring Day, Road Kill).

Like Whispering Corridors, Chang’s film seems to take a political stance, in this case the constant pressure on high school students to do well in tests and for schools in turn to excel in league tables (one that many parents and teachers may well agree with. And like Whispering Corridors, it’s kick-started its own franchise with Death Bell 2: Bloody Camp. All in all this is an enjoyable horror with some effectively grisly scenes, and nice to (finally) see it on UK DVD…

A smashing edition of the film comes with a stack of extras to keep you going, including making of featurettes on the film, make-up design and sound, trailer and music video.