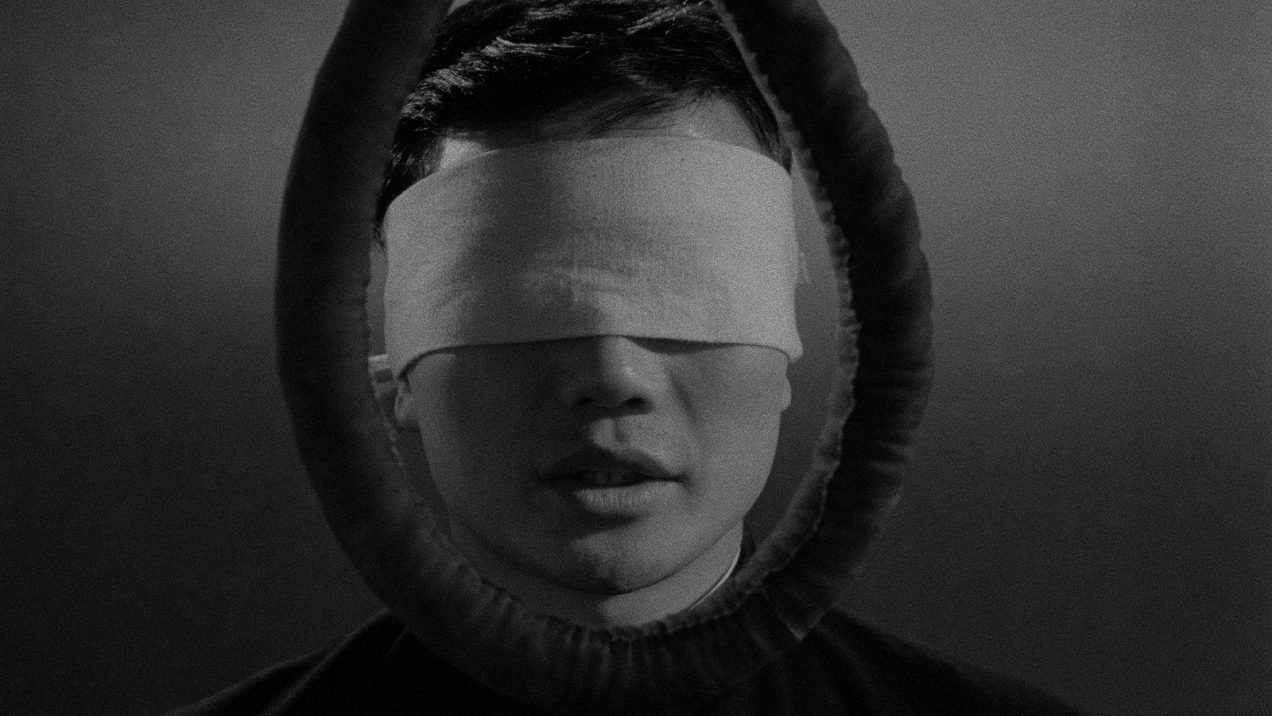 In conversations about the Japanese New Wave, one name to be surely mentioned is the name of Oshima Nagisa, one of Japan’s most prolific Japanese New Wave directors. Like many of his peers, Oshima rejected mainstream Japanese cinematographic conventions and set out to confront political and social themes in a more direct and thought-provoking way.

While this tendency was already apparent in Oshima’s second feature film Cruel Story of Youth (1960) and in the highly controversial Night and Fog in Japan (1960), Oshima’s formal experimenting reached a new height in Death By Hanging (1968), a narrative based on the real-life case of Ri Chin’u, an ethnic Korean who murdered two Japanese schoolgirls in 1958.

One day, R, an ethnic Korean who has murdered two Japanese girls, is led to the gallows, but his hanging fails for inexplicable reasons.  Due to this failure, a discussion among the various state officials on how to proceed ensues. While many want to immediately redo the execution, the fact that R is unconscious, a state where he’s unable to assume his guilt, makes the execution against the law. They decide that, in order to be able to execute him again, they should bring him back to consciousness.

But bad luck strikes again. After R regains consciousness, he appears to have forgotten everything, everything about his crime and everything about himself. In order to make him remember who he is, i.e. a Korean criminal, they set out to re-enact his crimes and various moments of his past.

To empower the activist potential of Death By Hanging, Oshima applies three formal modulations of the narrative ‘reality’. The first modulation, also the most radical, concerns the transformation of the ‘objective’ perspective of the beginning into a perspective subtly marked by the presence of the spectator. By way of this modulation, the spectator is able to feel his/presence in the framing of the narrative space. The two other modulations, i.e. the shift towards more theatricality and the influx of narrative absurdity, might be less radical, these changes are highly effective in turning the narrative into a more symbol-rich experience. It is, as a matter of fact, only this effective play with symbols that enables Death By Hanging to become such a powerful statement.

The failure of R’s hanging also instigates a discussion about how to proceed in accordance with the letter of the law. The most important aspects evoked in this discussion concerns the radical a-subjectivity of the law as well as its function of suspending the subjective implication of those who follows its letter. In other words, the faces of the state that want to execute R again – faces that are not that emotionless after all, are able to hide their subjective desire behind the letter of the law. They are, in other words, able to suspend the responsibility for their desire. 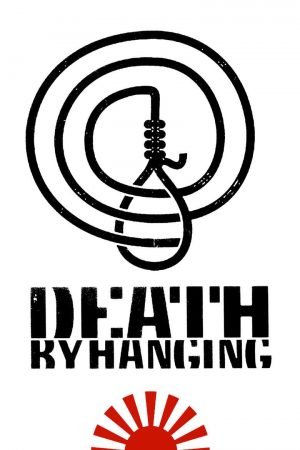 The theme of ‘subjectivity’ Death By Hanging is raised from the moment the faces of the state attempt to make R remember who he is, i.e. a Korean criminal. While we could say that Oshima approaches the notion of subjectivity from the tense relationship it has with the imaginary dimension as structured by the Other, this formulation fails to account for the complexity present in Oshima’s narrative. In truth, Oshima aims to show how Japanese subjects – subjects structured by the Japanese Other – impact the subjectivity of those subjects part of the Korean minority. This ravaging impact is only possible by way of the oppressive images (prejudices, …, etc.) the Other of the (Japanese) majority conditions. In other words, the whole attempt to bring R to the point of re-assuming his guilt amounts to nothing other than (re)writing the coordinates of his subjectivity by imposing – in a process of reflection – the imaginary images and the signifiers the Japanese Other associates with the Korean minority.

This ‘re-writing’ is stimulated by the (narrative) dynamic of question and answer. The various questions that R poses – questions that question the symbolic – invites the various members of the state to impose their hastily fabricated answers, answers ever reflecting his ‘own’ Korean-ness, as seen from a Japanese imperial perspective, back to him. One particularly powerful moment in this dynamic is when the education officer is led to answer R’s question of what a Korean is. It is in the officer’s struggle to find a decisive answer that Oshima beautifully unearths the fact that national identity is but a mere construction. As there is no national identity in the Real, the education officer ultimately ends up defining Korean identity by an imaginary distinction (i.e. inferior/superior) substantiated by the Japanese Other.

When R joins the re-enactment of his life, his behaviour starts to contradict the instructions – instructions supposedly revealing who he truly is – the education officer gives him. As instructing R has become ineffective, the officer starts commenting on R’s behaviour as it happens instead. His commentary, as can be expected, is not neutral and aims to frame his comportment in line with the officer’s preconceived ideas of R as Korean and as criminal.

While the narrative, as a whole, might be a little bit too long, the symbolic richness supporting Oshima’s critique ensures that Death by Hanging remains engaging throughout its runtime. This symbolic richness, most sensible in Oshima’s symbolic play with the Japanese flag, enables the director to sharply express his criticism on the crimes of the Japanese state, i.e. the death penalty. One powerful moment that powerfully evokes Oshima’s position concerns the shot of the coffin draped with the Japanese flag. In this shot, the Japanese flag has become synonymous with the state as such, turning the draping of the coffin with the flag into a symbol for the structural possibility of the state to hide, while leaning on the letter of the law, the murders it enables.

Hiding somewhat behind Oshima’s main critique on capital punishment lies another commentary on the functioning of Japanese imperial ‘Other’ as such. Oshima clearly illustrates the fact that the Japanese Other has no place whatsoever for the subjective ‘truth’ of Korean subjects. Relegated to the fringes of society, the ‘truth’ of the Korean subject is structurally repressed by the Japanese Other. It is therefore not unsurprising that those that represent the Japanese state efface the political dimension of the R’s act of rape/murder in their re-enactment of his life. For if this dimension was taken into account, one would be forced, as Oshima beautifully shows, to confront one’s own implication in the violent impact of Japanese imperialism on the Korean subject.

While there are, of course, many moments of fixity present in the cinematographical composition of Death By Hanging, Oshima’s composition stands out because of its fluidity, i.e. its use of (often temporally long) semi-fluid moving shots. After the failure of R’s hanging, the cinematography undergoes two subtle changes. The first change concerns the temporary inclusion of trembling spatial movement while the second change concerns the qualitative dimension of camera-movement as such. While both changes fit within the documentary style of framing, these changes subtly transform the spectator’s position. Whereas the former style was characterized, up until a certain point, by distancing objectivity, the changed quality of the spatial movement has no other effect than evoking the presence of the spectator in the narrative space – our look coinciding with the camera movement.

Even though we feel present in the narrative space, we are also kept at a certain distance due to the theatrical dimension of the staging and the absurdity that comes to characterize the narrative’s unfolding. Beyond keeping us at a safe distance, this shift toward more theatricality has one other effect: it uncovers the perversity that marks the state’s officer’s attempts to make R assume his guilt. The perversity is to be found in the very fact that the state officials’ attempt to re-construct R’s ‘subjective’ ‘truth’ is actually driven by their desire to redo the execution, their desire to commit R’s murder. It is this underlying desire, and nothing else, that eventually ‘perverts’ the doctor and puts the Chaplain in an awkward position.

Another important element in the composition of Death By Hanging concerns the use of the narrating voice (Nagisa Oshima). While one can argue that this voice, a voice dryly describing the exterior and the interior of the execution house as well as the procedure of the convicted final moments, deceptively introduces the narrative as a documentary, this voice also gives the unfolding of Death By Hanging its minimal spatial frame, a frame of spatial reality that encases the theatricality present in the staging of R’s narrative. While the narrating voice quickly disappears in order to focus on the speech interaction between those present in the narrative space of the execution house, this voice returns one more time to vocalize the final sentence of the narrative. While this surprising return corroborates the framing quality of the narrating voice as such, it also ends up being Oshima’s most direct narrative device – the vocalisation positions the spectator as an accomplice to murder- to force the spectator to change his opinion.

Death By Hanging is an extraordinary narrative. By blending satirical theatricality and absurdity masterfully together, Oshima has succeeded in crafting a powerful experimental canvas where he is able to expose the perverse dimension that marks the law of capital punishment and to highlight the radical impact the imperialistic Japanese Other has on the Korean subject. Oshima’s Death By Hanging might very well be the most effective political statement ever made in Japanese film history. It’s a true classic of political driven cinema that has, maybe contrary to one’s expectations, remained as relevant as it was in the past.

Death By Hanging4 screens as part of the Japanese Avant-Garde and Experimental Film Festival 2019 at the Barbican, which takes place from 20 to 22 September.