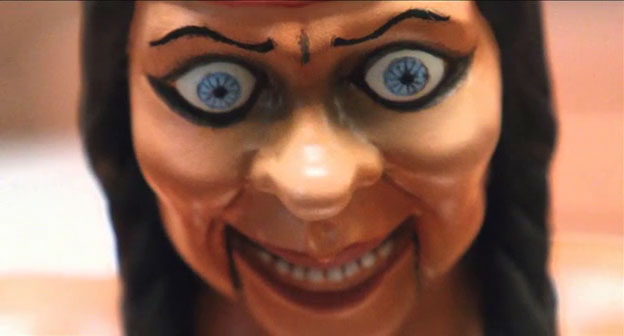 Starring Tatsuya Fujiwara from the Battle Royale and Death Note series, ten participants of various different backgrounds and ages are lured to a remote high-tech house with the promise of an extraordinary, life-changing amount of money. Finding a dining table placed with 10 Native American figurines, they are soon introduced – via a naïve Lost-styled animated introduction video – to the rules of the house.

They are part of a psychological ‘experiment’. If there’s an ‘incident’, one of them can play ‘detective’ and solve it. If a majority agrees, the accused is detained thanks to an ominous mechanical guard, and the detective receives double their money. Anyone found outside of his or her own room after 10pm will be ‘eliminated’. The game ends when seven days pass, or two survivors remain…

When they discover a weapon in each room – a gun, poisoned tablet, crossbow, fire stoker, battle axe, nail gun, and so on – and one of the participants turns up dead the next morning, they quickly realise that they are caught in a real life Cluedo board game where the stakes are their own lives. Welcome to ‘Paranoia House’…

Based on the best selling novel The Incite Mill by Honobu Yonezawa, the film version has all the familiar archetypes of the mystery novel: the honourable protagonist; the mother; the young ambitious couple; the older generation; and so on. All we need is Colonel Mustard and a candlestick. Most of the participants are brought here out of despite times – a seemingly kneejerk reaction to the Global Recession brought out in so many Japanese films – yet the opportunity for real social comment or interplay is quickly lost as bodies start dropping. Unlike many of those Agatha Christie novels, there’s little depth to the characters.

Any remaining novelty is robbed by the appearance of Tatsuya Fujiwara playing almost exactly the same role he had in Kaiji: The Ultimate Gambler released a year earlier: a freeter, or unemployed loser, given the opportunity of getting rich quick for very little money or effort, and not realising just how high the stakes are. That this has been long-beaten to UK release by other films with similar pretexts like Gantz is just another nail gun in the coffin.

And Tatsuya is just as irritating here as Yuki Satoshihisa as he was in Kaiji; constantly overacting, whinging, fretting and annoying. Throughout he is labelled a ‘coward’ (at least that’s how it’s translated here), though standing in the way of loaded weapons and actually having a reasonable, level-headed point of view doesn’t strike me as cowardice. I think it must be code for just extremely annoying.

Tatsuya aside, the performances from the cast, which includes Haruka Ayase (Ichi, Cyborg She, Oblivion Island: Haruka and the Magic Mirror), Tsuyoshi Abe (Initial D, Wild 7), Aya Hirayama (Fighter in the Wind, Gokusen: The Movie), Satomi Ishihara (Sadako 3D, My Grandpa), Masanori Ishii (Shaolin Girl) and Shinji Takeda (Pulse, The Happiness of the Katakuris, Memories of Matsuko), are pretty solid. The older cast members Nagisa Katahira (Kyofu) as ‘stay at home mom’ Sawako Fuchi and Kinya Kitaoji (Asura, Peking Man, The Bullet Train) as ‘ex CEO’ Yoshi Ando give a definite weight to their roles, with the latter playing understated but tangible emotion, acting everyone else off the screen.

The only problem is there’s not enough to Satoshi Suzuki’s script to get over the utter preposterousness of the characters actions. For instance, if you were in a remote house where tensions were rising high and you knew someone had been murdered, and been warned to stay in your room or face being ‘eliminated’, would you really be that bothered about popping out to pick up the second part of a mystery book? Even if you thought the perpetrator was detained. Personally, I would be ramming up the furniture to the door and not getting a minutes sleep.

Visually this shares the claustrophobic confines of director Nakata’s virtual Chatroom, which I understand was filmed right before Death Game went into production, but released afterwards. Nakata’s direction is reliable, throwing in the odd shock along the way even when you can pretty much guess what’s coming, but it never stands out. There are familiar themes for Nakata, such as the mother who will do anything to protect her child, found in both the Ring and the original sequel Ring 2, as well as Dark Water, but this still doesn’t feel like he’s made the film his own stylistically.

Though there are some nice elements in the design, such as the creepy looking Native American figurines and the instructional video, but the production as a whole feels rushed and cheap, with the house’s robotic guard looking just a little too wobbly to be menacing. It’s in the gore that this really fails to deliver, lacking the impact that it really needs to drive home the dramatic effect. Again this seems more of a budget concern. Amongst it all, the score by Nakata and Mamoru Oshii composer Kenji Kawai (Ghost In The Shell, Ip Man) is actually rather effective, if lacking in distinctive melodies.

It transpires that project came about to celebrate the 50th anniversary of management company Horipro, with all the leading cast managed by them. This seems like an odd pretext, effectively making the film a long promo reel for the cast and company, and not particularly successful for it.

Perhaps the most striking oversight is that the central premise of this high-tech house, full of surveillance equipment, so reminiscent of the Big Brother house, is never explored; either in terms of the proliferation of reality TV and its mark on society (like Series 7: The Contenders) or the effect and manipulation of social networks (such as Tokyo Gore School). It’s only towards the end we find that the contestants are indeed being watched outside of the house.

The motivations of the nefarious Foundation behind the experiment are never revealed; nor do we find out how they ‘monetise’ footage from the house. And as for why they can’t even seem to be able to spill for a taxi for the contestants back into the city? Well… Somewhere in there at least there’s a trick, a hook, something that could give an extra dimension to the film. And you might have expected more from a director coming straight off the back of Chatroom?

The film is entertaining enough, but ultimately rather hollow and unrewarding. Okay, so maybe it has more in common with Big Brother than I thought…

As usual with MVM releases, this is a mimimal release with a good transfer of the film, but no extras.