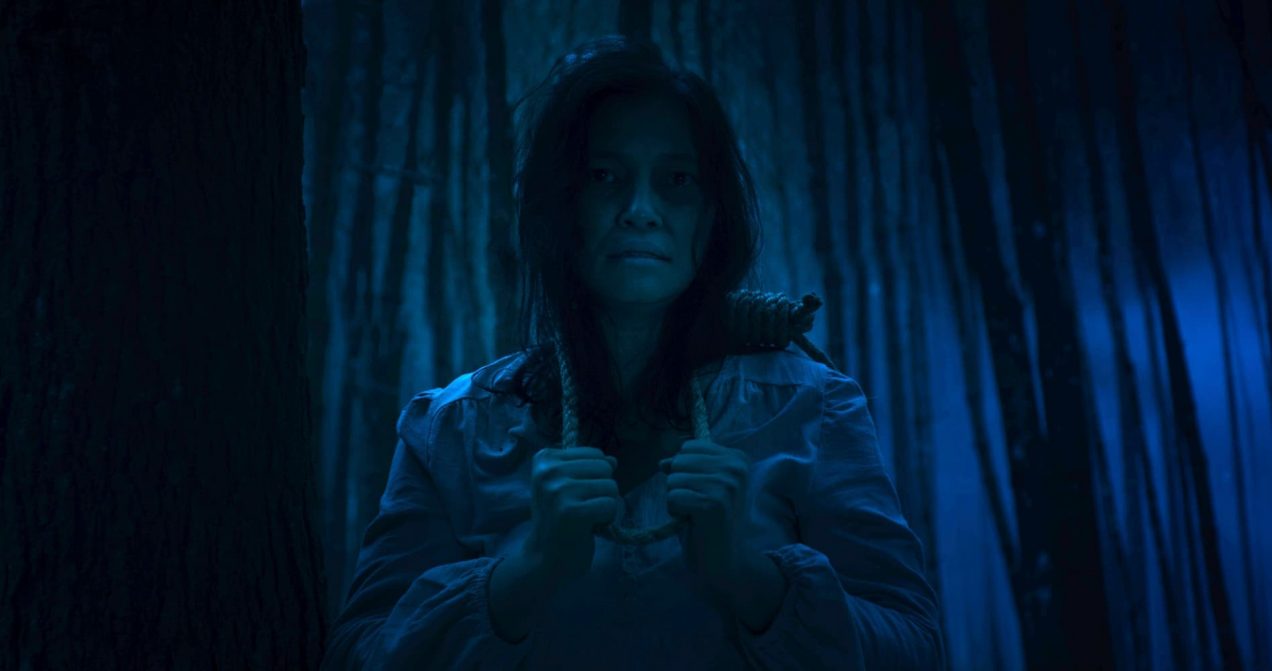 Although Indonesian black magic and folk horrors have been increasingly popular of late, for the most part productions have been mainly coming from the one interconnected group of filmmakers, namely Joko Anwar, Kimo Stamboel and Timo Tjahjanto, whose films Impetigore, Satan’s Slaves, The Queen of Black Magic, May the Devil Take You and others have caused a stir at genre festivals and on streaming platforms as well as topping the domestic box office. Given the success of these films, and the growing interest in Southeast Asian folk horror in general, it’s not surprising that more directors are trying their hands at the genre, including Cornelio Sunny, who makes his debut with the shocker Death Knot, a more independent, regional take on the subject.

Cornelio Sunny also stars as Hari, a man living in Jakarta, haunted by dreams of a sinister ritual being performed deep in the mist-shrouded woods, which are shared by his sister Eka (Widika Sidmore). After receiving news that their estranged mother has died, apparently having hung herself, the siblings head out to the isolated rural village where she lived, accompanied by Eka’s fiancé Adi (Morgan Oey). On arrival, they find themselves most unwelcome, with the locals believing their mother to have been an evil shaman who made a pact with a demon and who has caused a wave of unexplained suicides in the area. While Eka and Adi are keen to leave, Hari decides to try and get to the bottom of things, coming across a mysterious standing stone in the forest which seems to be the focus of the sinister goings-on.

The setup of Death Knot is certainly a familiar one, and the plot sticks very closely to the usual formula, with the rural village being depicted as a hotbed of superstition and suspicious behaviour, and with the city-dwelling protagonists coming under increasing threat as they gradually uncover their family connection to the local source of evil. There’s nothing new here, and Cornelio Sunny takes a slow-burn approach that does test the patience during the early stages, not least since the direction the film is going in is obvious from the start. The film is also rather familiar in visual terms, with lots of mist in the forest, rundown shacks and strange visions, all of which recalls others of its type, Impetigore in particular.

Where Death Knot does stand out is through its use of more regional traditions and beliefs, and though its avoidance of gore and explicit nastiness, Cornelio Sunny instead focusing on recreating rituals and depicting shamanistic practices. Though as a result the film isn’t exactly frightening, it does have an interesting, at times unnerving feel, and the incorporation of local folk dance and music into its supernatural elements makes for some memorably eerie scenes. Despite it being a more indie and lower budgeted affair than most of its peers, Sunny makes good use of his locations, and the film benefits from an oppressive, doom-laden atmosphere, with a real feeling of dank, sticky humidity. Though a few more frights might have been a good idea, there’s a pleasing avoidance of cheap special effects or CGI, and he shows an impressive maturity for a first time director, seeming genuinely committed to producing a more grounded example of folk horror, and successfully managing to pull off the tricky task of juggling directing and playing the lead role.

Death Knot certainly has plenty to offer dedicated Indonesian horror fans, and while more subdued than other recent examples of its kind, there’s certainly something to be said for its low-key approach. Cornelio Sunny deserves credit for what he’s achieved with a lower budget, and though overly familiar in places, the film is a fine debut and a solid example of the form.

Death Knot screened as part of Udine Far East Film Festival 2021, which ran from 24 June to 2 July in both physical and online formats.