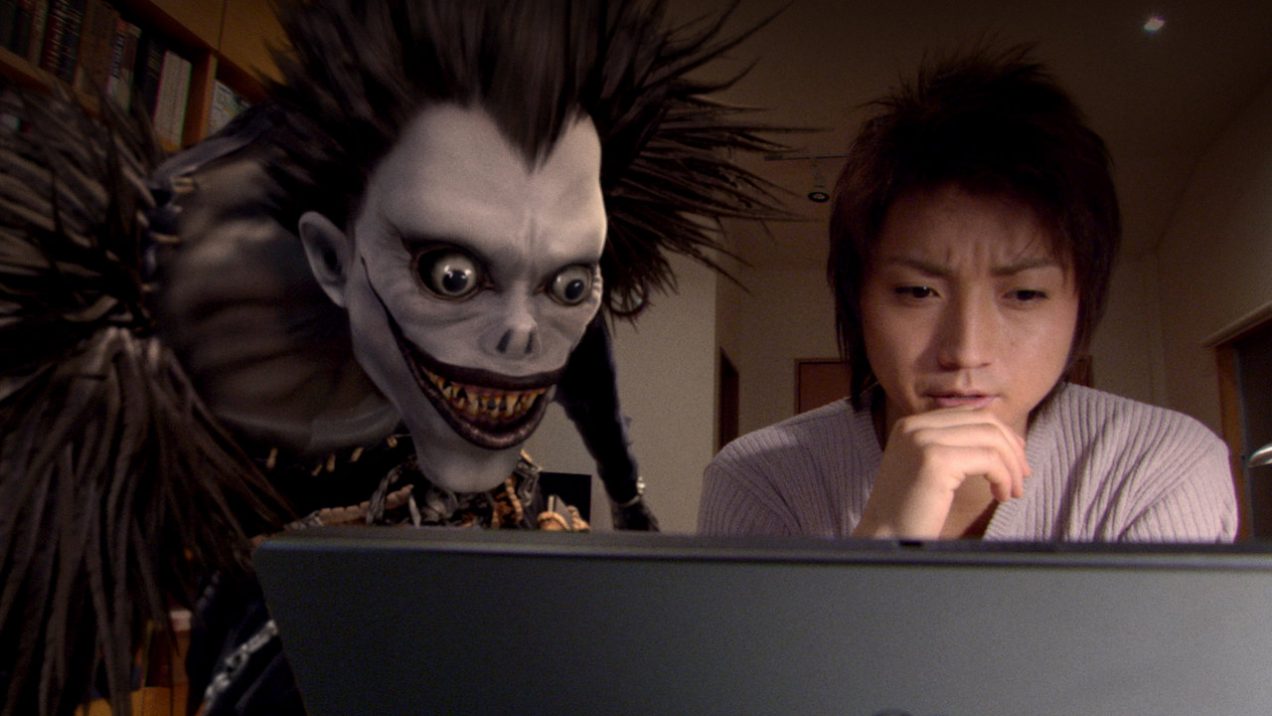 A solid live-action version of a manga starring Battle Royale’s Tatsuya Fujiwara that doesn’t replicate the tone of the original manga – but be prepared to wait for the sequel!

Throughout the world criminals who have previously evaded the law are mysteriously dying. The general public attributes this to a mysterious figure known as ‘Kira’ (quite simply derived from how the Japanese pronounce killer), and soon the local Japanese police force attempt to track him down.

What no one realises is that ‘Kira’ is in fact a student called Light Yagami (Tatsuya Fujiwara), the son of the Police chief in charge of the investigation. His newfound power comes from a Death Note dropped by death god Ryuk. This note gives Light the power to kill anyone he chooses simply by thinking of them whilst he writes their name in the book.

Disillusioned by the justice system he sought to join, he sets about making the world right by writing the names of those he feels deserve it in the book, or indeed anyone else that might get in his way.

When the International Police Organisation and the FBI get involved in pursuing ‘Kira’, led by the equally enigmatic master detective ‘L’ (Ken’ichi Matsuyama), the pair enter in to a match of wits to see who will be caught out first. But just how much is Light willing to sacrifice in order to escape being found?

(Warning: The rest of this review contains spoilers!)

Based on a successful manga, Death Note’s original creators writer Tsugumi Ohba and illustrator Takeshi Obata, deliberately fashioned an amoral anti-hero as their lead. They wanted the story to be confrontational, to raise issues about the justness of Light’s actions without telling their audience how to think, but often at the cost of exploring the aftermath of Light’s deeds on his victims and their families.

All of which can be very clever, but doesn’t necessarily translate well to a teenage audience, nor to the gung-ho anime adaptation that came soon afterward – bringing an almost inevitable controversy to the series. Shusuke Kaneko, director of the camp Gamera monster films from the 90s and Azumi 2: Death or Love, decided to demonstrate a little more of the devastation Light’s actions caused, but still with little moral judgment on them.

Which leads to something of a problem – who do you root for? It’s not quite like Apt Pupil, as you watch Todd Bowden’s character become something far nastier than even a hiding Nazi war criminal – because within the constraints of the format you really do feel that you should at least care for one of the characters.

But that’s so hard to do. It soon turns out Light is something of a cold, calculating fish, prepared to sacrifice anyone he perceives as a threat to his work, even a loved one. ‘L’ is brilliantly played as a peculiarly idiosyncratic teenager by Ken’ichi Matsuyama, difficult to like. Only perhaps the fated FBI agent Ray (Shigeki Hosokawa) and his fiancé Naomi Misora (Asaka Seto) are particularly sympathetic – though that’s probably Shusuke’s intention.

His vision is eerily close to the original. Ryuk the death god seems to have flown straight from the pages of the mange, rather nicely making few concessions to being part of our three dimensional world. Ken’ichi Matsuyama’s performance as ‘L’, too, is straight from the original illustrations, keeping all of his ticks and eccentricities.

Eminently watchable, with a nice but somewhat under utilised use of the Death Note’s pages to introduce it’s different powers, Shusuke unfortunately spends too much time telling the story: showing us Light exploring his new found power and involved in discourse with Ryuk, whom only he (and anyone else who has touched the Death Note) can see. You can’t help but feel the running time could easily have been cut some 30 minutes. Indeed, often the manner in which Light uses the full powers of the Death Note to evade the authorities is not as clever as it could be. And just when you think the mind games between Light and his opposite in every manner ‘L’ are heating up, you realise the film is coming to an end and you’re going to have to wait for the sequel to find out what happens next.

Let’s just hope that like Japan, where they had less than a five month wait for Death Note: The Last Name, we’ll have equally short time.

Death Note is released on DVD by 4digital Media today.

The UK release of Death Note comes as a two-disc special limited edition including a 24-page book with silver foiled logo and slipcase, and plenty of extras. Though easily a match for releases in other regions, it’s hard to get excited about the range of trailers, production video diary and press conference footage. There is a comprehensive ‘making of’ featurette however, and the picture and sound quality are top notch.