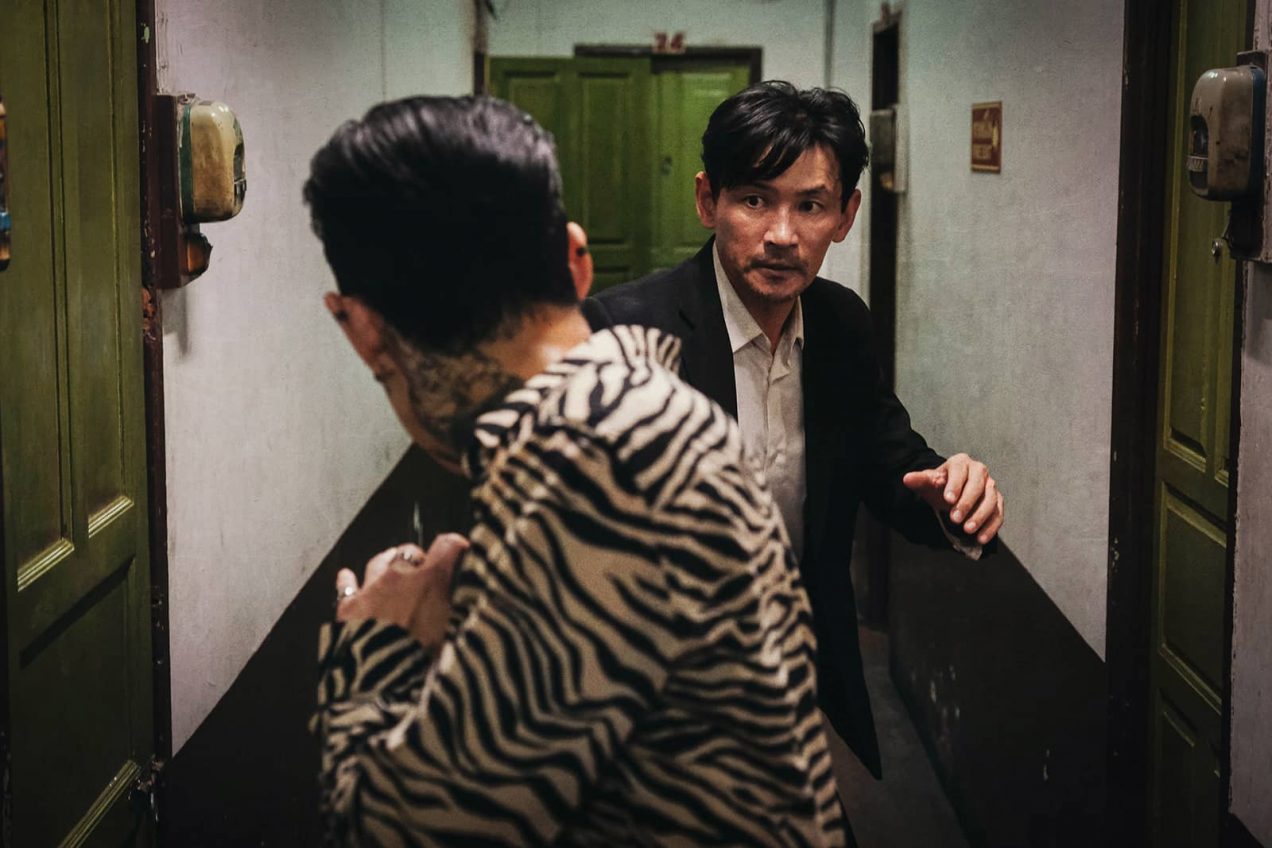 Although stories of world-weary but well-dressed hitmen looking to get out of the game are only too commonplace, there was still a lot of excitement surrounding Deliver us from Evil, with the film featuring two of Korea’s biggest stars in Hwang Jung-min and Lee Jung-jae, marking their first outing together since the 2013 gangster blockbuster New World. The film was the second from writer director Hong Won-chan, following up on his 2015 debut Office and his work as scriptwriter on an impressive list of hits like The Chaser, The Yellow Sea and Confession of Murder, and is a similarly gritty genre thriller with plenty of violence and amoral behaviour. Having completed shooting in Thailand, South Korea and Japan just before the global COVID pandemic, the film was one of the few big releases to make it to domestic cinemas during 2020, and proved one of the year’s biggest box office successes.

The film opens in Japan, with Hwang Jung-min as In-nam, a contract killer who’s just finished his final job, taking down a particularly unpleasant Japanese mobster called Koraeda. In-nam’s plans to retire and move to Panama for a quiet life are thrown in to disarray when he learns of the kidnapping of a former colleague’s young daughter in Thailand, and when he realises that he has a personal connection to the case, he heads to Bangkok to investigate, getting caught up with a child trafficking ring. Meanwhile, Koreada’s brother Ray the Butcher (Lee Jung-jae) starts on a brutal campaign of revenge, killing everyone connected to his sibling’s death, the trail of bodies leading him closer and closer to In-nam.

Hong Won-chan’s career to date has seen him working within the constraints of the thriller genre while managing to subvert the usual clichés and to create some fascinatingly unprincipled protagonists, and so the idea of him taking on the time-honoured ‘trying to get out, dragged back in again’ hitman yarn does have promise. Unfortunately, Deliver us from Evil never really manages to rise above the familiarity of its premise, with Hong being happy to play things strictly by the numbers, from In-nam’s unlikely Panama plan through to the child trafficking and organ harvesting subplots and the thawing of his stoic façade. While the lack of originality is perhaps forgivable, it’s hard not to feel underwhelmed, especially given just how similar the film is to so many others, chiefly Lee Jeong-beom’s classic The Man from Nowhere, which it closely resembles. It’s all very predictable, right through to the final frame, and this results in an unfortunate lack of tension or real engagement, even when Hong eventually tries to up the stakes.

On the plus side, Deliver us from Evil is never dull, and what it lacks in narrative and character, it at least tries to make up for in terms of Bourne Identity style action. Hong does keep things moving at a fast pace, and with the film clocking in at less than two hours, it’s an efficient piece of genre cinema with only a few pointless flashes of melodrama distracting from the carnage. Knives are very much the order of the day, and things do get pretty stabby and violent in places, the film benefiting from a hard edge – apparently, it had to be trimmed by 50 seconds to avoid an adults-only rating in Korea. Being mostly set in Thailand also helps, providing a different backdrop for the same old shenanigans, and Hong manages to combine the usual noir look with something a little more adventurous.

Unfortunately, what prevents the film from shifting up a few gears is the fact that Hwang Jung-min’s In-nam really isn’t a very interesting protagonist, hamstrung by an entirely standard set of motivations and with there being very little in the way of character development. As films like Man from Nowhere and A Bittersweet Life have shown, having a strong, silent type for a  protagonist is fine, though Wong never manages to add the same kind of gripping ambiguity and flaws that he did in his previous scripts, and In-nam remains rather dull throughout, despite Hwang’s best efforts and considerable star power. Though equally one-note, Lee Jung-jae’s Ray is a lot more fun, and the film’s best parts revolve around him living up to his ‘Butcher’ nickname or chewing the scenery – more focus on his entertainingly single-minded revenge rampage would certainly have been a good thing.

Deliver us from Evil isn’t a bad film by any means, and is a well-executed and generally entertaining thriller with a high action quotient. However, despite the lead pairing of Hwang Jung-min and Lee Jung-jae, and the presence of the talented Hong Won-chan behind the camera, the film is less than the sum of its parts, and is really just too familiar and lacking in ambition to ever be truly memorable.

Deliver Us From Evil is released on Digital from 4th January 2021 by Signature Entertainment.