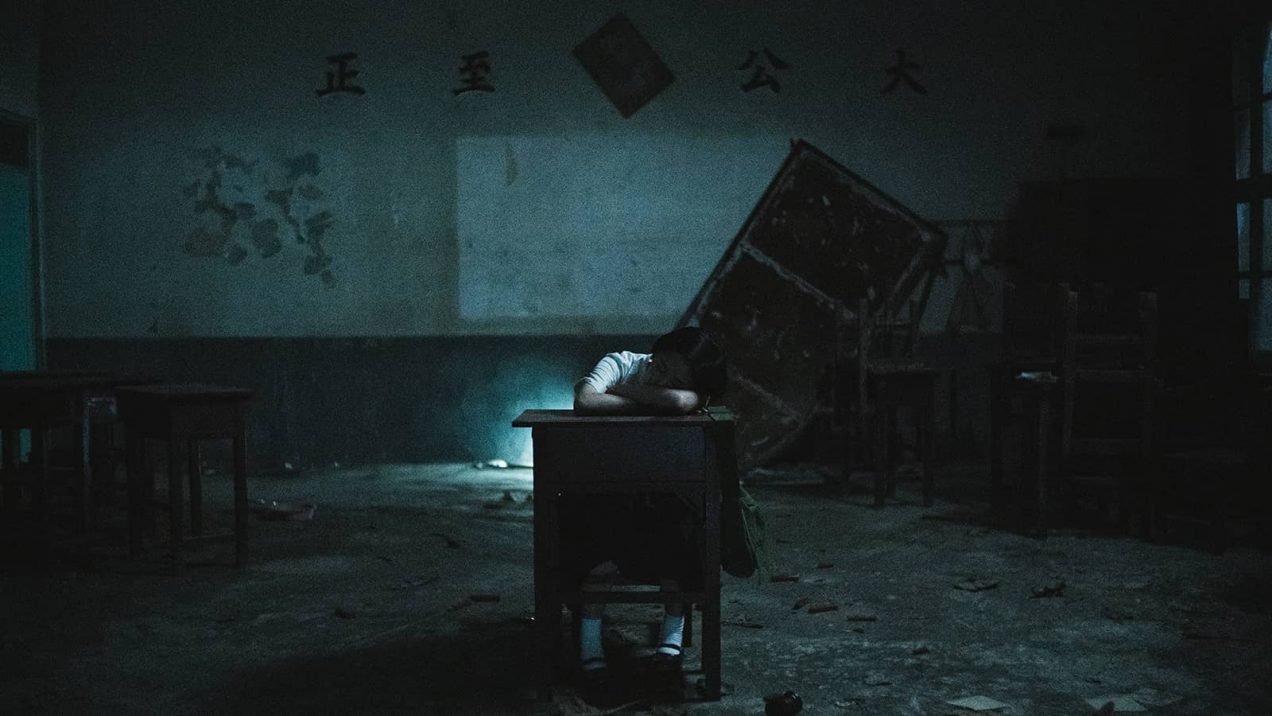 The idea of John Hsu’s feature film debut Detention is very good. The execution, however, not so much. Detention is based on the eponymous popular video game, which has also been the basis for a novel since its 2017 release. The game, novel and now the film are set in 1960s Taiwan, during White Terror period. A time of martial law that lasted from 1949 to 1987, during which thousands of people were persecuted or even executed by the Kuomintang government for real or perceived communist opposition.

An excellent starting point for a horror film, to depict the very real horror of the White Terror oppression and interrogation through metaphor and allegory. Sadly, Detention does not live up to this potential. A muddled narrative that never fully congeals into a coherent whole does give glimpses of ingenuity, which are however undone by genre conventions.

School students Fang Ray-shin and Wei Chung-tin are part of an underground group consisting of both students and teachers, secretly reading forbidden literature (which includes the Bengal poet and artist Rabindranath Tagore). Some are in it for it political reasons, others just for the literature.

When the police come to the school to arrest one of the teachers, the group turns onto itself to find out who betrayed them, leading to more arrests. Or so it seems. The entire story is told in short flashbacks, while Fang and Wei are trapped inside their school at night, on the run from a monster that represents police oppression and from a ghost that looks like Fang – which is supposed to reflect that Fang played a role in the police finding out about the illegal book club.

However, the flashbacks aren’t as much flashbacks as things that the two students find out about themselves, since they have forgotten everything that happened apparently. Their quest now is to survive the night so they can remember what happened – including when one of them hung themselves in front of the school to atone for their sin of betrayal.

This story perhaps works in the video game, where you as the player start out without the knowledge of the past of the characters and finding out how to get out of the school means confronting the unknown past is the goal of the game. But as a more passive narrative in the film, it doesn’t make much sense. Which would be acceptable if the atmosphere and imagery were sufficiently nightmarish to make up for this. However, here too Detention gets a failing grade.

There are some haunting images spread out through the film, and some that effectively connect the supernatural horror to the real-life terror. But they’re thrown at the viewer and the protagonist rather slapdash amidst the chaos, so that the horrific bunker covered with photo’s of fallen comrades gets drowned out by more mundane horror effects.  The monster that chases them from time to time is especially cheesy when shown in full form and frame, which is a shame, because it is effective when it’s just a mysterious force in the first few scenes. Its allegorical qualities as the representation of state oppression, including slogans and wearing an ill-fitting police cap, are rather ineffectual due to its silly look. Instead of a scarily representing the White Terror, it makes the White Terror look dumb and not at all the horrific force of pain and humiliation for the citizens targeted by it.

These ineffectual horror effects and the confusing storytelling devices nullify any impact the drama, of the ‘real’ terror these teens and adults went through, might’ve had. A wasted opportunity of an interesting premise.

Detention screens as part of the International Film Festival Rotterdam 2020.