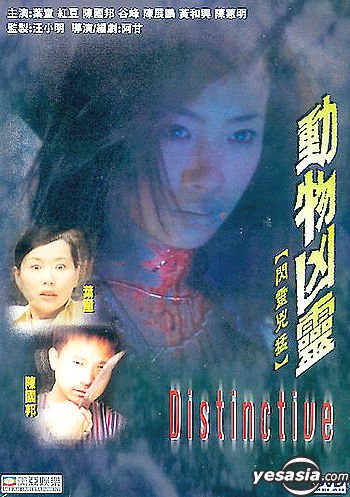 With Western cinema screens still plagued by culturally-insensitive, money grabbing remakes of vastly superior Asian films, it’s vaguely comforting to come across Distinctive, which provides positive proof that such unwanted traffic travels in both directions. The film is modelled on the traditional Hollywood ‘creature feature’ subgenre, and although the idea of a Hong Kong interpretation of such an overused premise is an initially interesting idea, it turns out to be a failure on every possible level, being an inexcusably shoddy carbon copy of its western counterparts. Unfortunately, and quite inexplicably, this is a result of its choice to copy only the worst aspects of its source material, and to quite pointedly avoiding any of the visceral content that could have at least made the proceedings entertaining. By electing to deny viewers any blood, nudity, or even special effects, the filmmakers have made the incomprehensible decision to annoy and frustrate, leaving an empty, hollow, and ultimately pointless shell which has nothing to offer anyone – why the film was awarded a Category III certificate is utterly baffling, not to mention misleading.

The plot barely merits mention, and reads like a hundred similar features. Briefly, it concerns a couple of reporters and a group of young people who travel to the forests and mountains of Yunan province in China in search of a mysterious beast with the odd, rather literal name of ‘distinctive’. Unsurprisingly, it turns out that some members of the group are seeking the creature for their own greedy ends, as there is a considerable reward for samples of its skin and fur. This leads to conflict, not only with each other, but also with the odd inhabitants of the old town where they are staying, and of course, with the understandably enraged creature itself.

As should be patently obvious from the above synopsis, writer-director Ya Gan has made absolutely no effort to spice up the formula whatsoever, and within just a few scenes it’s made abundantly clear that the viewer should expect nothing but cliché after cliché’. The film slavishly ticks every tired box of the subgenre, from ominous warnings by weird villagers to annoying red herring villains, right through to the creature being represented by ludicrous plastic claws that occasionally intrude into the frame. This continues right through until the staggeringly lame ending, which involves a great deal of singing, dancing, and some kind of patronising cultural message.

All of this would have been forgivable if the film itself had been up to scratch, but sadly Distinctive is shockingly inept, and director Gan shows an amazing lack of skill for even the most basic elements of filmmaking. In addition to imbuing the whole sorry mess with an inexorably slow pace, Gan seems blissfully ignorant of continuity, even switching from day to night several times during the course of one mock-hysterical chase scene. It’s hard to say how the director handles action sequences, as the sad truth is there aren’t any, just endless scenes of people wandering around in a forest whose beauty the director seems determined not to exploit. Matters aren’t helped by the fact that the soundtrack is made up of ill-fitting tunes which have been lifted either from other films or classical pieces, and simply thrown together without any thought for effect or mood.

Unquestionably, the worst failing of Distinctive is its lack of any kind of visceral content. Although the film has a Category III rating, it barely registers as IIb, and there is no nudity and only a couple of weak scenes of after-the-fact gore. As a result, most viewers will feel incredibly cheated, and if anything, the film comes across as painfully coy and in gratuitously good taste. This works to its considerable disadvantage in many ways, not least of which is the fact that the bloodless death scenes (which in themselves are few and far between) generally involve cast members merely falling out of shot with a mild yelp, leaving the viewer in serious confusion as to exactly who is dead and who is still alive. Similarly, after suffering through the umpteenth towel-wearing shower scene, it becomes clear that the film has no intention of showing even enough skin to qualify as a tease. And so, with a nagging feeling of having been insulted, the viewer simply switches off.

To be honest, even if Distinctive had contained buckets of blood and a considerable quotient of nudity, its proud lack of originality and astoundingly shoddy execution would still have left it as a film that simply begs to be ignored, standing as one of the very worst examples of Hong Kong Category III cinema.