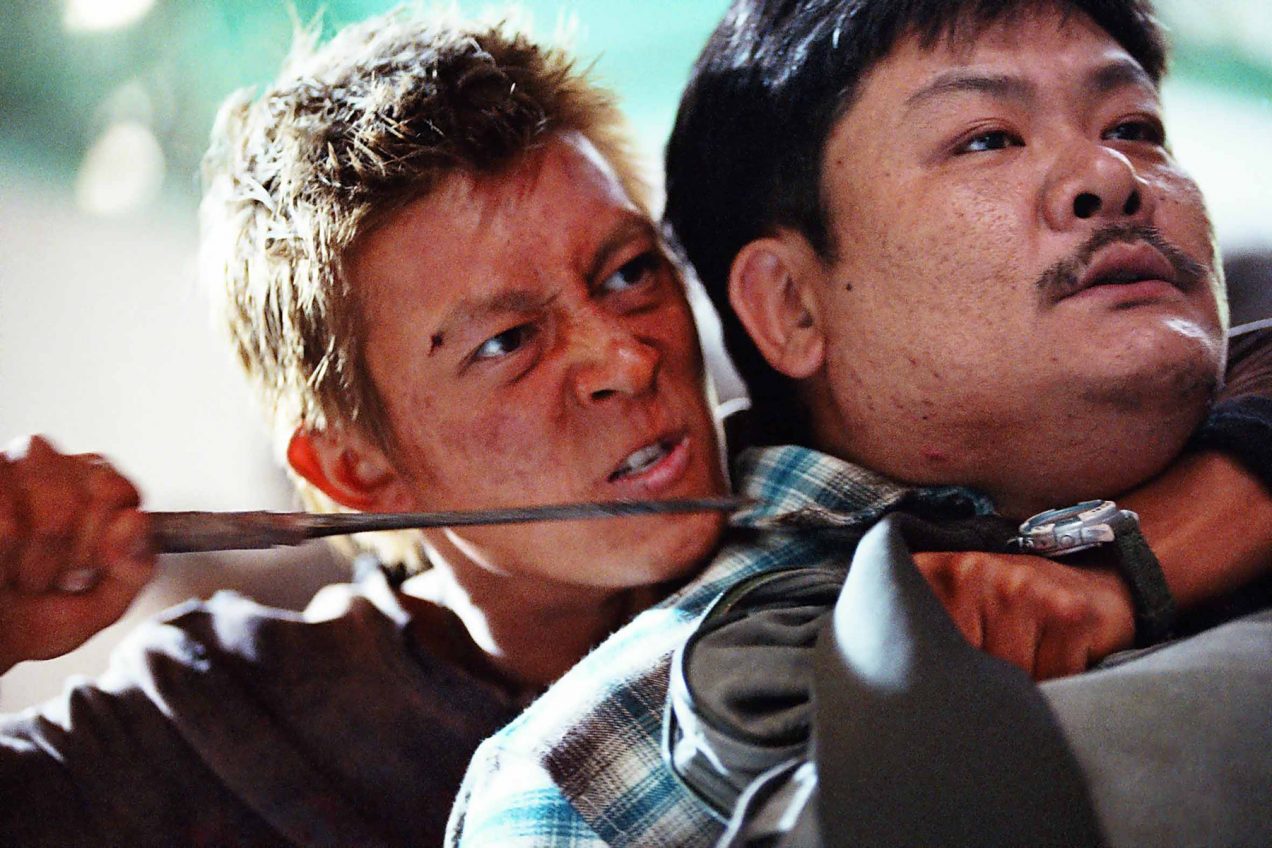 A harrowing experience with a multitude of unexpected twists and overflowing in violence, only for the hardiest of viewers…

Edison Chen (Initial D, Infernal Affairs 2, The Sniper) plays an unnamed Cambodian hitman, with seemingly little remorse yet plentiful talent for his profession, demonstrated visually as he offs his target in the first 10 minutes of the film (and then anyone else who proceeds to get in his way). The eponymous ‘Dogs’ of the title, Chen and young explosive detective Wai (Sam Lee, Made In Hong Kong, Visible Secret, Bio Zombie, The Midnight After), go to great lengths to explore their full skills as actors to express the pure carnality of the human soul, snapping at anything that moves and destructively brutalizing all that gets in their path, Wai on the hunt and Chen desperate to escape after completing his contract.

A whirlwind of desolation is left in his wake as Chen seeks his escape from the tailing police, savagely killing any who get in his path for little or no reason, however a compassionate moment of reprieve comes in the slaughter of a father who has been incestuously raping his daughter in their home on a landfill. This fleeting heart develops as the hitman then grows bound to her, as she shows devotion to Chen by even beating and viciously attacking the police to help the duo flee.

Director Cheang Pou-Soi (Soi Cheang, Accident, The Monkey King, Motorway, SPL 2) revels in dramatic tension and nihilistic over-the-top action, raising the bar on voyeuristic action with the police mercilessly beating innocents and Chen savaging anyone who gets close with his doglike teeth. It’s a sickening experience, and I do say it’s voyeuristic as there are moments when it becomes too much, and yet a trial in itself to turn away. The primal sensations of the human psyche and our animalistic history are represented well through the pitching soundtrack and fast paced editing, a riding experience that helps to build on strong foundations laid down by the cast.

Minor subplots help to pad out the viewing time, including Chen being hunted himself in the latter act and Wai’s father being a cop in a coma, albeit it a twisted cop who has accepted blood money one too many times. The angle of ‘police corruption’ becomes almost forcibly served to the audience until it grows tiresome, the path strewn with bodies and dogs constantly savaging pieces from one another until lines become blurred. Who really is the better person here, the police with no mercy? Or the hitman, who with all his failings is helping a girl he only just met.

The final action scene reflects perfectly the primal rabidity of the film, with brutal unforgiving violence contrasting the harshness of life. Fitful clashing music scores a moment that couldn’t be any more dramatic or memorable. Dog Bite Dog leaves an unexpected taste in the mouth as the worst of society, the utmost pessimistic and treacherous view of the world is exhibited in the public eye for all to gaze upon.

The police break the very laws they try to uphold, whilst the hitman is redeemed through his feelings for (and actions towards) an unknown girl he saves from incestual rape. In the end, you realize this isn’t a tale about good or evil at all like normal action films. This is a film about perspective, how everything isn’t stereotypically black and white but the world is actually all just shades of grey.

Dog Bite Dog is available on US and HK DVD.