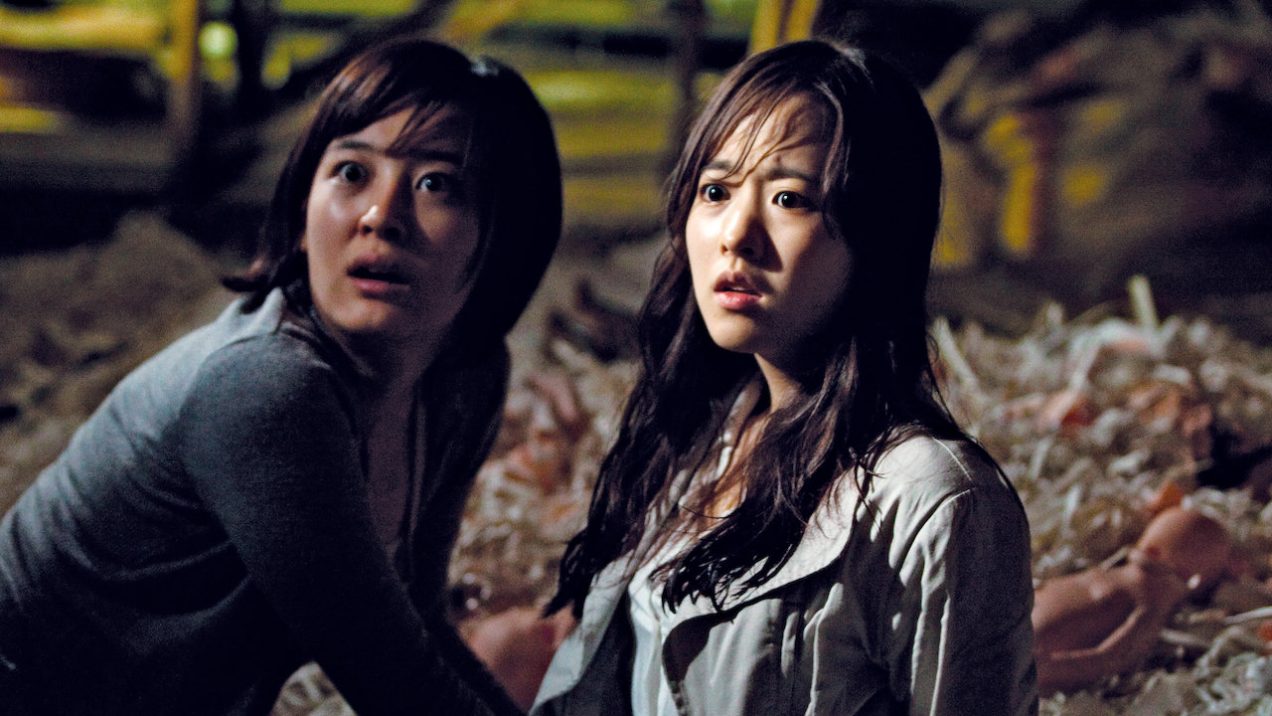 Another Korean take on the Ringu formula, this time with an online twist…

Some 14 years after Sadako crawled from the television set, the influence of Hideo Nakata’s classic Ringu was still very much in evidence in the Asian horror genre. 2012 Korean shocker Don’t Click is a perfect example of this, a film revolving around a haunted internet video whose viewers all end up mysteriously dead. The film was directed by Kim Tae-yung, who certainly knew his way around the genre, having helmed popular K-horror outings Ghost and Muoi: The Legend of a Portrait, and featured a cast of young up and coming talents, headlined by Kang Byul (whose first big screen appearance came in Whispering Corridors 5: A Blood Pledge), Park Bo-young (Scandal Makers) and Joo Won (Fatal Intuition).

Kang Byul stars as Jung-mi, a young student who blackmails her older sister Se-hee’s (Park Bo-young) boyfriend (Joo Won) into getting her access to forbidden videos from the cyber-crimes department where he works. Jung-mi gets more than she bargained for when he gives her a bizarre video showing dolls being mutilated, which seems to change when she shows it to Se-hee and other people. Soon enough, her life is falling apart after her computer and personal files are hacked, and she starts behaving very strangely indeed, with several of her friends going missing. Understandably concerned, Se-hee decides to investigate the internet video, attracting the attentions of a vengeful spirit herself in the process.

The story of Don’t Click is pretty straightforward stuff, and basically plays out like a less serious and more teen-oriented version of Ringu, Kim Tae-kyung not making much effort to add anything new to the fright formula other than the internet update. The distinct air of familiarity isn’t helped by some vague plotting, with the actual link between the ghost and the web technology being unexplained and used inconsistently, and this results in a narrative which never quite lives up to its premise. The investigate element of the film doesn’t make much sense either, being mainly packed into the final act and jumping from A to B to Z without any real rhyme or reason. This does defuse some of the potential terrors, and with most of the scares being telegraphed and by the book, it’s hard to imagine seasoned horror fans frightened by anything the film has to offer. To be fair, with the film clearly being aimed at a younger audience and designed for wide commercial appeal, Kim doesn’t do too bad a job in this respect, and at least keeps things moving along and throws in quite a bit of harmless spooky action.

The film surprisingly works much better away from its genre elements, and has a lot to offer as an effective and tense commentary on the spread of this kind of technology in Korea and the many ways in which it can negatively affect peoples’ lives. Kim depicts a surveillance society with cameras on every corner and in every room, with the characters all seeming to spend most of their time online through computers or phones. Through this, the film at times has an almost Paranormal Activity feel, making good and creative use of different media, that while never exactly frightening, does hit home. The film also ties modern technology and social media in particular to themes of bullying, jealousy and identity, with the threats of computer viruses and hacked webcams being far more alarming to the characters than the often rather lazy ghost – without giving much away, much of the plot revolves around Jung-mi getting filmed by a possibly possessed computer camera when dancing around in her underwear and the video being posted on the internet, channelling a very real world fear that gives the film a definite relevance.

These aspects of Don’t Click are far more effective and gripping than the Ringu copy and paste, middle of the road scares of its supernatural side, and it’s a film best approached more as creepy and fantastical social commentary rather than actual horror. With this in mind, it’s an interesting and entertaining watch, either for younger viewers new to the genre, or older viewers who get anxiety attacks just thinking about social media and the sinister implications of modern technology.