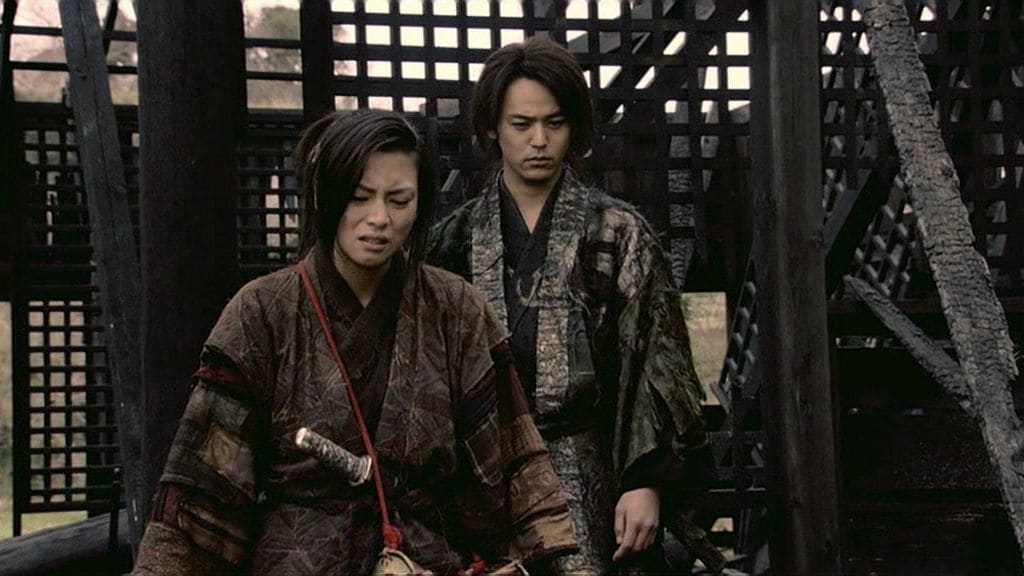 Legendary and prolific manga artist and animator Osamu Tezuka’s work continues to hold an appeal for modern filmmakers. The most famous of which is Astro Boy, which is not only attributed with creating the Anime aesthetic but also brought it to an international audience, and it’s also due for a big Hollywood 3-D makeover this Autumn. Other works to be more recently reinterpreted include his Fritz Lang-inspired Metropolis, Kimba the White Lion, Black Jack, and now Dororo.

Dororo started life as an ongoing manga that Tezuka himself never completed in the late 1960s. It quickly made the transition to an animated series in 1969, when it seemed like an heir apparent to Astro Boy, but the series concluded after 26 episodes. More recently it resurfaced as a Video Game, proving the source material still had an appeal for fans (even if it wasn’t a monumental success), so why not a live-action version at last?

A hapless thief, Dororo (Kou Shibasaki, Memories Of Matsuko, One Missed Call, Battle Royale) befriends the mysterious Hyakkimaru after he saves her from a demon in a bar fight. Hyakkimaru (Satoshi Tsumabuki, The Fast And The Furious: Tokyo Drift), as it turns out, had most of his body parts replaced as a baby after his warlord father Daigo Kagemitsu (Kiichi Nakai, When the Last Sword Is Drawn, Riding Alone for Thousands of Miles) made a deal with 48 demons which involved promising them most of his vital organs and limbs.

Only Hyakkimaru isn’t aware of all that. Discovered by a numinous physician who has managed to replicate most of his organs synthetically, he roams Japan only knowing that each time he dispels one of these demons, armed with his mystical blade for a left hand, a real organ is returned to him. Dororo joins him on his quest, but Hyakkimaru is about to discover his true origins, and a real reckoning is coming for the pair.

An enjoyable slice of fantasy, this live-action version of Dororo seems to pull heavily on the recent resurgence of such programmes as Monkey (even if the movie version of the new series, Monkey Magic, didn’t fair so well at the box office). In hindsight, you could even argue that the original 70s Monkey series was partly inspired by the Dororo series, its depiction of Demons seems so familiar. (And then you could just plane turn that argument on it’s head, and suggest that perhaps Tezuka was inspired by the early 60s Shaw Brothers productions of the Journey To The West – but enough already!)

Dororo and Hyakkimaru’s world is nicely brought to life by director Akihiko Shiota (Canary, Harmful Insect), allegedly shoot on location in New Zealand. (I guess there’s nowhere else for fantasy films to go since Lord Of The Rings?) It’s a nice looking film, with some interesting ideas. There’s the moth demon and her caterpillar offspring); and the physicians Edward Scissorhands style laboratory where he creates Hyakkimaru’s new limbs and organs.

However, often the standard of CGI lets it down. It seems rough and simplistic, but not in any sort of stylised way, and with little effort to blend it with the filmed shots. It feels rather cheap, not helped by, shall we say, ‘real’ demons (or at least not CGI) whose masks seem equally as shoddy – not even a match of the original Monkey series, let alone the recent film.(If there’s a big budget to this film, you wonder where it’s gone?)

Surprisingly, the involvement of legendary action choreographer (not to mention director) Ching Siu-Tung (Curse Of The Golden Flower, An Empress And The Warriors, House Of Flying Daggers, A Chinese Ghost Story) does little to raise the quality. Sure, the action scenes are well directed, but not outstanding by any means, let alone inspired. And considering how many films he was involved with during the height of the ‘wire fu’ craze, it’s hard to put that down to Ching being stretch too thinly with his own projects and other films like Kung Fu Dunk. It’s almost as if he just couldn’t get how the green screen action would play out – but again, it’s not as if he hasn’t worked with CGI before.

Thankfully the leads are pretty likable in their roles, with Shibasaki’s feisty Dororo (a male role in the original manga) playing up her tough but cute persona. Tsumabuki is strong too, despite being remarkably sanguine about his predicament and abandonment by his parents. There’s a solid supporting cast too.

Like the recent equally enjoyable if a little better played out) Ichi, Dororo suffers from being a little too long for it’s own good. There seems to be a lot of time spent on exposition, explaining Hyakkimaru’s origins, too much for my tastes, and the plot often seems to stall. Contrast that with very little time spent on the eponymous character herself (though perhaps that’s deliberate, considering two sequels are slated and we end the film already halfway through the 48 demons?)

Dororo is a fine fantasy film, but ultimately you wish it was a little quirkier. It lacks the ‘super-cuteness’ of Osamu Tezuka’s original manga, let alone his distinctiveness, and that seems a shame to me.

Solid DVD release includes an informative Road To Dororo featurette, deleted scenes, trailer gallery, and one of those stills galleries you could do without.