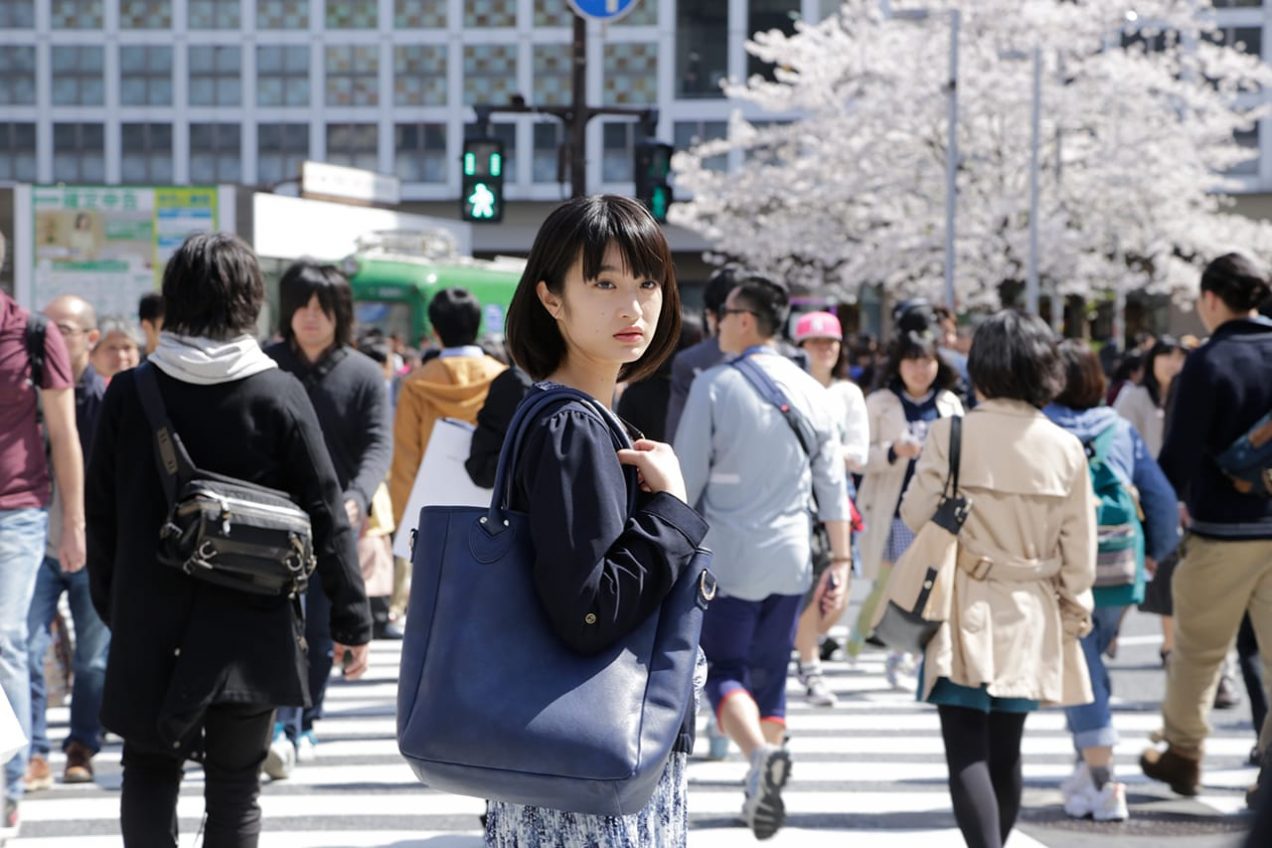 Director Yoshiyuki Kishi makes his debut with Double Life, based on the novel Nijyuu Seikatsu by female Japanese writher Mariko Koike. Revolving around stalking and existential angst, the film is a thoughtful and quiet affair, in which a student starts following one of her neighbours around as part of an academic thesis, leading to drama and personal turmoil. Starring Mugi Kadowaki (Love’s Whirlpool) in her first lead role, the film also features Masaki Suda (soon to be seen in the director’s upcoming film Wilderness), Hiroki Hasegawa (Attack on Titan) and Lily Franky (After the Storm), and has been enjoying a successful tour of international festivals.

Mugi Kadowaki plays Tama, a grad student working on her philosophy PhD thesis, living with her boyfriend Takuya (Masaki Suda). When her professor Shinohara (Lily Franky) suggests she write something inspired by French writer Sophie Calle based around the concept of ‘following strangers’ as a means of exploring human existence, she initially baulks at the idea, though decides to give it a try with her neighbour Ishizaka (Hiroki Hasegawa). After discovering that he’s cheating on his wife, she finds herself becoming more and more obsessed with his daily life, causing trouble with her boyfriend and putting her in danger of discovery.

For all its intellectualising, Double Life is a film about stalking, and the initial question posed by Lily Franky’s professor as to what it means to be human really isn’t much more than a stepping off point for an exploration of voyeurism. There’s nothing wrong with this of course, and director Yoshiyuki Kishi plays upon the duality suggested by the title, all the characters of the film having two sides to their personalities, either discovered or undiscovered. This is reflected in the naturalistic look and feel of the film, its camera lurking like an unseen observer, and there’s a growing air of tension as to whether not only Tama but the viewer will be caught spying on the characters. The ways in which Tama’s relationship with her boyfriend and professor change also add drama, and it’s fascinating to see the ways in which her interactions with her subjects change her and impact her life.

To a large extent Double Life relies upon the viewer feeling the same level of interest in stalking as Tama does, as Yoshiyuki leaves a great deal unsaid and is content mainly just to let events unfold, the film having an ambiguous and detached air. While there’s something to be said for the film’s quiet and subtle approach and long dialogue-free stretches, its general obscurity is at odds with the frequent moments of melodrama and exposition which Yoshiyuki throws in, often accompanied by clichéd and schmaltzy music. This does make it tough and uneven going at times, especially given its two hours-plus running time, and it’s hard not to see it as a film occupying the awkward space between commercial and art house cinema.

Although the film does shift its focus during the latter stages, for the most part it revolves around Tama, and there’s no denying that as a protagonist she’s rather a blank canvas, seemingly on purpose. While it’s easy enough to see why Tama becomes so focused on Ishizaka, in no small part due to her seeing him having sex in an alleyway with a beautiful woman during the daytime in the middle of Tokyo, it’s never really clear why she sticks to the stalking or what her motivations are. Yoshiyuki makes little attempt to try and develop her character beyond her immediate actions, and though again this fits in with the film’s coolly philosophical manner, it does make it emotionally distant, something which undermines its final act drama. Thankfully Mugi Kadowaki does well in the lead role, managing to bring a little spark to Tama through a bold performance, at least hinting at some kind of blasé inner turbulence. Following on from her daring turn in Love’s Whirlpool, Mugi is quickly proving herself one of Japan’s bravest young actresses, and it has to be hoped that she’ll soon be seeing more lead roles like this.

Though ultimately a bit of a mixed bag, Double Life is still very much worth catching, as an interesting, if perhaps not particularly original take on the themes of stalking and voyeurism. Most likely to be enjoyed by patient viewers, the film benefits from Mugi Kadowaki’s strong work in the lead role, and makes for an impressive debut for Yoshiyuki Kishi.

Double Life screened as part of the New York Asian Film Festival 2017, which ran from 30 June to 16 July.