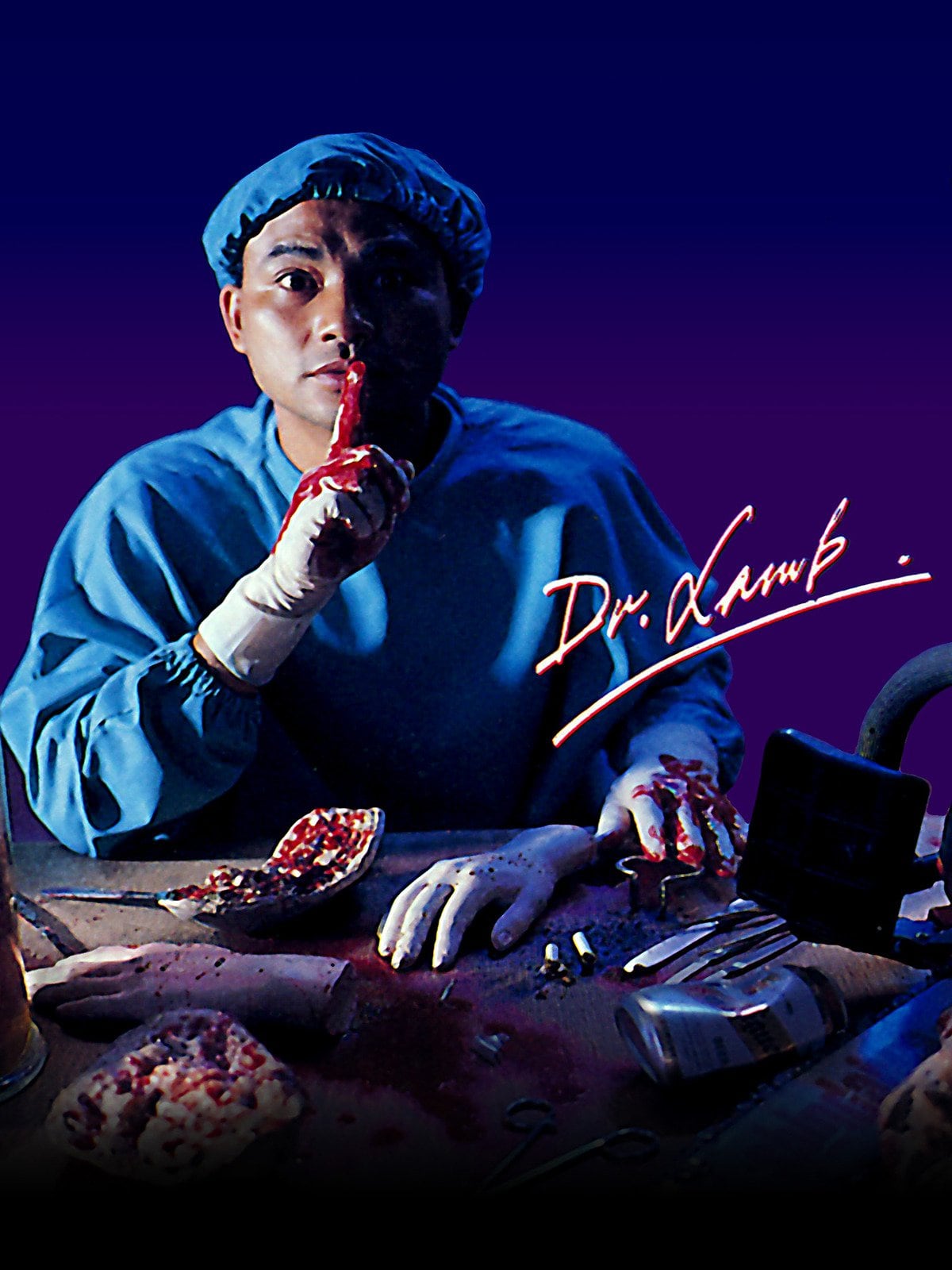 Simon Yam stars in this Cat III classic, the true crime tale of a necrophiliac serial killer stalking the streets of Hong Kong…

Dr. Lamb is a classic of the Category III genre, and one of its most influential and trailblazing films, helping to establish the template that so many of its subsequent rip-offs would slavishly adhere to. Released shortly before another of the genre’s defining moments, The Untold Story, the two films are actually very similar, being ‘true crime’ thrillers which exploit gruesome Hong Kong murder cases – Dr. Lamb focuses on a series of killings in 1982 by Lam Kor-wan, or ‘The Rainy Night Butcher” as he was dubbed by the Chinese press, a night shift taxi driver who murdered a number of women and subjected their bodies subjected to hideous post-mortem abuses.

Despite the title, the killer is not, in fact, a doctor, and was actually called ‘Lam’, which was the film’s original title, and which was probably altered to infer the inclusion of cannibalism. Although the film is free from this particular practice, it is undoubtedly one of the Cat III genre’s most extreme, containing a great deal of nudity, murder, mutilation, and a decidedly unhealthy dose of necrophilia. This doesn’t come as a big surprise, given that the film was co-directed by the notorious Billy Tang, responsible for the memorable Cat III atrocities Red to Kill and Brother of Darkness amongst others, and Danny Lee, who never shied away from a bit of exploitative sleaze. As expected, the pair exploit the lurid details of the story to their full extent, leaving no stone unturned in their efforts to shock the viewer, resulting in a barrage of bad taste that fell afoul of censors both in Hong Kong and internationally. However, perverse sex and gore aside, Dr. Lamb is actually a very good film, tautly directed, morbidly fascinating and carrying an impact that will stay with the viewer for days.

After a prologue in which a young boy is punished for peeping on his parents while they are having sex, the plot proper begins as the Hong Kong police are alerted to some pornographic photographs featuring women who look suspiciously like they are dead. Led by Inspector Li (Danny Lee himself, who Cat III fans will recognise from The Untold Story and other genre shockers) the police investigate, linking the women in the photographs to a series of unsolved murders and missing person cases.

The police arrest the owner of the photographs, a shy, quiet night shift taxi driver named Lam (Simon Yam, who graduated from playing the psycho in horror films like Dr. Lamb, Insanity and others before becoming one of the most recognisable and respected stars of Hong Kong cinema), who happens to have been charged with molestation in the past. When Lam refuses to say a word, despite being battered by police, they haul in his whole family and try to force them to wring a confession out of him. Eventually, Lam flips out in spectacular fashion and relates the whole shocking story to the police, sparing them none of the horrifying details of his crimes, which he sees as a moralistic service he has been providing — that is, ridding the city of filth.

The plot of Dr. Lamb is almost identical to that of The Untold Story, and the two films actually share the same screenwriter in Law Kam Fai. In both movies, Fai shocks not only through the actions of the maniac, but by displaying the brutal tactics of the police employed in their ‘interrogations’. Here, the police are not portrayed as being quite so bumbling, but are every bit as vicious, using hammers to beat and leather belts to whip Lam into confessing, and are not above threatening the innocent members of his family to gain leverage. This critical treatment of the authorities gives the film a very nihilistic feel, as it makes the film devoid of positive or indeed particularly likable characters.

Lamb and Story are also similar in that both have virtually identical casts. Danny Lee plays basically the same role in both (though in Dr. Lamb he is sadly without his trademark entourage of prostitutes), and is accompanied by the same bunch of incompetent police lackeys. The narratives unfold in exactly the same way, and both rely on the audience’s morbid desire to learn the gory details of the crimes in order to generate tension. Tang and Lee do this very effectively, and the film builds skilfully, the shocks growing in intensity and frequency until the traditional climax, which contains some truly sickening acts of perversity. The direction, in general, is of a high standard, especially in comparison to other Cat III films, and it all hangs together surprisingly well.

Although Hong Kong is portrayed as the usual neon jungle, the dark landscape of its nightlife is effectively employed to give a real sense of Lam as a predator, hunting, as he sees it, in a barren moral wasteland. The film is very gory, even by the standards of the genre, though very little of it is gratuitous. All of the murder scenes are brief strangulations, with the mutilations and dismemberments occurring after death. This does involve some outstandingly unpleasant sequences of Lam hacking away at the corpses with scalpels and power tools, including the frenzied slicing of one mercifully dead woman’s breasts (this scene is shortened in the cut version).

Similarly, the high quotient of nudity is never played for titillation, given that most of it occurs after the women are dead, and in the very disturbing context of Lam’s necrophiliac tendencies. The film takes things even further by adding Lam’s molestation and photographing of his young niece to his crimes, which truly ranks him amongst the most loathsome and frightening villains in Hong Kong cinema. Dr. Lamb does lighten the mood with some rather grotesque humour, including what has to be one of the most nauseating examples of slapstick ever, in which a hacked off breast is tossed around for laughs. Thankfully, these scenes are not too frequent, and do not upset the downbeat tone of the proceedings, though they do sit quite uncomfortably next to the horror.

Just as Anthony Wong was central to the success of The Untold Story, Simon Yam carries Dr. Lamb on his shoulders with his excellent performance, genuinely creepy and convincing as a man who switches from being polite and mild-mannered to a howling, wide-eyed monster who cannot control his bestial instincts. Fai’s script gives Lam a fair amount of depth, and though there is only a token gesture to actually explain his actions, he is treated as a human being, albeit an evil one, rather than a pantomime psychopath, and is all the more believable and chilling for it.

All of this gives Dr. Lamb a grounded centre and the feel of a real story, differentiating it from the vast majority of sex and violence obsessed films which claim to follow its example. Although unquestionably exploitative, with gore and shocks the main reasons for its existence, the film is nevertheless well made and exciting in a sick sort of way, and makes an interesting, disturbing point about the methods of the Hong Kong police that is almost as horrifying as the crimes of its central character. Though it is obviously not for all viewers, for those willing to witness the depths of human depravity, Dr. Lamb provides a wild, intense ride and remains one of the Cat III genre’s very best.