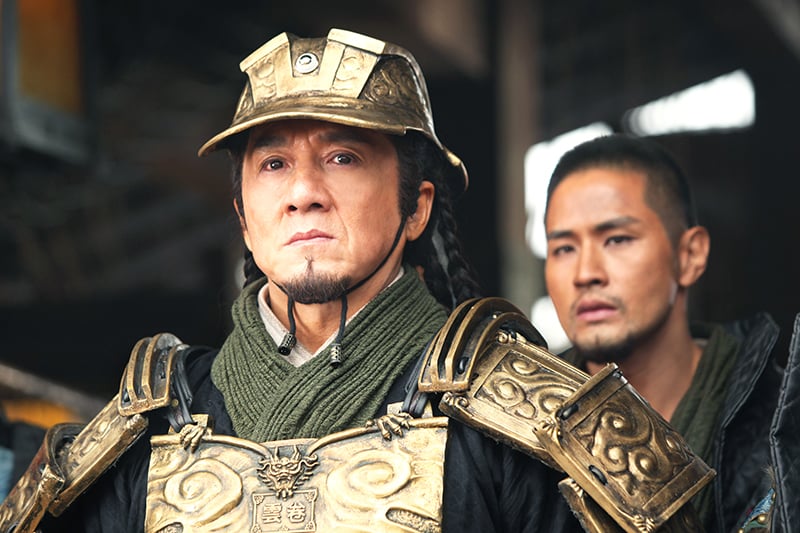 The latest blockbuster from Jackie Chan took pole position in the highly desirable first day of the Chinese New Year holiday period this year, with an incredible performance at the Mainland China box office. Roughly the equivalent of the 4th July releases in the US, the comparison underlines the sort of over the top ‘event’ movie audiences expect. And largely Dragon Blade delivers – notable for the inclusion of well-known American stars John Cusack and Adrien Brody and large segments in English. Though by no means the first, it shows an increasingly common trend for US stars imported into Chinese movies, rather than the other way around. But with hokey dialogue, convoluted plot and a large cast of misdirected Western actors, it’s hard to see this appealing to old Chan fans who will find little new to enjoy, let alone winning over new fans.

Chan takes the central role of Huo An, leader of the Silk Road Protection Squad, charged with keeping the peace between the 36 nations that surround the region. But when Huo An and his squad are framed for smuggling gold, they find themselves banished to works as labourers at Wild Geese Gate, a city on the edge of the Han territory populated by members of all the nations. Fractious relations between the different groups keep them from working together to rebuild the cities defensive walls until a renegade Roman legion turn up outside led by general Lucius (John Cusack).

With a flattering captain, Huo An takes charge of Wild Geese Gate, leading to a duel between him and Lucius where inevitably they come to respect each other. It turns out Lucius has fled the empire with young Publius in his care, whose older brother Tiberius (Adrien Brody) blinded in an attempt to take power. Soon the pair have all the nations working together with Roman engineering knowhow. But if Lucius thinks he’s left the evil Tiberius far behind him, he’s wrong – by an army of around 100,000 soldiers!

For writer/director Daniel Lee, Dragon Blade continues an ongoing strategy to use historical themes and wuxia styles that can easily sell to Mainland audience, following Three Kingdoms: Resurrection of the Dragon (2008), 14 Blades (2010) and White Vengeance (2011). For a director who debuted with a striking update of Chang Cheh’s classic wuxia One-Armed Swordsman, What Price Survival in 1994, it’s actually been a decade since he used contemporary settings, with (the somewhat appropriately titled) Dragon Squad. If the gambit hasn’t exactly worked out for him in the past, even with the massively enjoyable Donnie Yen vehicle 14 Blades, Dragon Blade has set that track record to rights, helping to contribute to a first quarter of 2015 that has seen China’s box office takings rise 40%.

Of course, when it comes to blockbusters like this one should expect an outrageous plotline, but Lee insists on throwing everything he can possibly think of at the screen. There’s an irrelevant, Titanic style present-day framing device that underlines the ‘inspired by true events’. (A phrase that largely guarantees the following will be anything but.) The plot is littered with unexplored tangents, diversions and dead ends. In flashback we see Lucius ogling Publius’ mother, unsure if it’s as a protector or as a lover. Similarly, when Huo An realises he’s been betrayed, he rushes back to his village to save a teacher and her pupils who he mentors, only to have this dropped and disappear by the end credits. This unnecessary noise only succeeds in a relentless pacing that fails to allow the story or performances to breathe. Instead Lee uses slow motion and flashbacks, countless flashbacks, to underline drama or emotion, spoon-feeding his audience on how they should feel.

Perhaps the biggest problem is not the plot, but that the whole thing seems less self-aware than you might expect of an action film nowadays. Cheesy plotlines are easier to digest if the filmmakers allow audiences to see that they know the whole thing is ridiculous as they think. It’s all a little, well, straight, rather than playful.

Throughout it all, Chan is as likable as ever – once again playing the accidental hero who stumbles upon the truth and brings all the nations together (in a heavily-handled message to the primary audience that underlines his ethnic group as Han Chinese throughout). It’s not so much that Chan sticks with his ‘good guy’ rhetoric – having found that even characters with a little grey in their nature don’t go down so well with audiences. Its more Lee casts (and even photographs) him in a saintly, almost Jesus-like quality. But then perhaps that shouldn’t be much of a surprise: the films original title translates as ‘Celestial General, Heroic Army’. (There are no ‘Dragon Blades’ as far as I could tell.) This becomes problematic, as Huo An is kind but naïve, hardly any sort of strategic genius. In order to keep Chan as an ‘everyman’, Daniel Lee packs in clumsy plot contrivances. It underlines Chan’s commendable values, buts seems awfully simplistic. It also offers us nothing we haven’t seen before from Chan. There’s even a point when fighting a female tribal adversary that he accidentally places his hands on her breasts, very much part of Chan’s physical comedy repertoire of 30 years ago.

At least in the physical action Chan excels, whereas Lee seems overwhelmed by the big action sequences and the CGI required for 3D. It’s in those more intimate fights, choreographed by Chan himself, that show he’s as on top of his game as he ever was. He even manages to make his co-stars Cusack and Brody, hardly the most likely action leads, look convincing as they face off against each other.

And what of our Western leads? Fed clunky, joyless dialogue to deliver, Cusack and Brody do the best they can – though with somewhat dead eyes. Brody delivers his lines with so much ham he could have made the entire cast and crew a sandwich (and there are hundreds of extras!) Both have form for enjoying taking part in cheesy productions to varying degrees of success, with Cusack seeming to use such appearances in films from Grand Piano to 2012 to fund his own private projects. (All I can say, Mr. Cusack, is I hope you’re working on another Grace Is Gone!) It’s the bit parts and extras that fill the ranks of the cast that underline an ongoing problem for Asian films with Western actors and the countless extras, that the performances are, at best, delivered flat and not well directed, at worst, quite terrible.

Interestingly, the cut that played at Udine apparently expunged some 20 minutes or so from the running time presumably to make this friendlier for international release. Gone is the pointless contemporary framing device, but so are several of the subplots, including the fate of Publius. Though that may help to cover some of the films flaws, it’s bound to make it even harder to follow for those that are vaguely interested in the actual plot.

Taken as a whole, it’s hard to see audiences flocking to this outside Asia, but even if Dragon Blade fails to capture audiences, one thing’s for sure: we definitely haven’t seen the last of Western actors in Chinese productions. Hollywood may have set it’s sights on breaking the Chinese market, but is seems China is intent on taking on Hollywood at its own game. And it’s about time.

Dragon Blade is released on Digital HD from 11 March, and on UK DVD and Blu-ray from Monday 14 March from Signature Entertainment.

Dragon Blade arrives on UK DVD and Blu-ray for a minimal edition with no extras. For those aware of the different versions of the film, this is the international version, running at 100 mins. (This is listed wrongly as 127 mins on Amazon and even Sugnature’s own website.

This is one case where that isn’t such a bad thing, as the major difference is losing the terrible and utterly needless ‘present day’ segments that envelope the actual story. Even trimming more of the film and making it tighter can hardly hurt, since some sections of the film simply didn’t hang together well to begin with. However, it might have been nice to see the original cut as an extra.