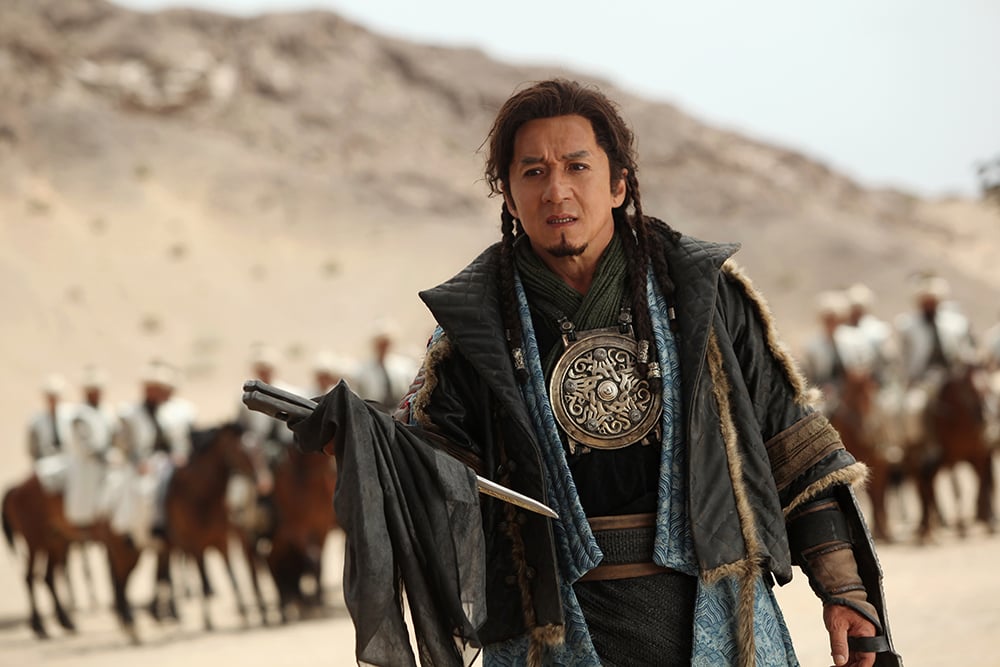 From working as a stuntman on Bruce Lee movies, to breaking all the bones in his body, to rushing through the streets of America with Chris Tucker, I thought that audiences had finally seen everything that Jackie Chan has to offer on-screen. Evidently I thought wrong, as he’s back working with Western A-listers in the eastern blockbuster hit Dragon Blade, purported to be the most expensive film in the history of Chinese production (at least until The Great Wall is released next year featuring Andy Lau, Willem Dafoe and Matt Damon).

Dragon Blade is a dazzlingly glitzy war epic where we see Huo An (Jackie Chan) leading the Silk Road Protection Squad, who dashingly gallop around the region stopping outbreaks of fighting and trying to keep the peace. Unfortunately his squad is framed for smuggling and exiled to a ‘forced labour camp’ to repair a fort city. This is quickly followed by the besiegement of the city by Lucius (John Cusack) and his merry outcast legion of roman soldiers, who quickly become friends with the workers of the city helping to rebuild it, and creating a kingdom of harmony. Unfortunately that’s all ruined when Adrien Brody comes riding over the hill as the menacing Consul Tiberius, leading an army of 100,000 Romans.

It’s not the first time Daniel Lee has delved into a historical epic, with both previous films Three Kingdoms: Resurrection of the Dragon and White Vengeance unearthing historically inaccurate tales of adventure. What else can we seriously expect though, from a historical blockbuster where Jackie Chan is the pinnacle of goodness who fights off the evil Western invader? The narrative overall isn’t this loose, as there is a smorgasbord of never-ending tribulations, action scenes and worry helping to pad out the gaps between anything that’s more than a sentence in length. It’s not that I don’t enjoy action scenes, of which Dragon Blade pulls off to aplomb with spectacular choreography from Chan and collaborator He Jun, but it just feels like the film forgot what it’s like to breathe, or allow room between scenes for a slight pause and relax. There’s no need to constantly keep the tension and action rolling, but this would be my only gripe with the film really.

Cusack himself is our everyman that holds the narrative together, the outcast fleeing Roman pursued by one army who makes friends with the other army. He has a list of acting credits only matched amongst the cast by Jackie Chan, and his performance in Dragon Blade is no less than stellar. He strives hard to bring emotion onto the screen and ensure you feel his actions and true motives behind his character. Perhaps it is notable that the classic Wes Anderson actor Adrien Brody was chosen to play the typecast villain on the other side of the sands? His Machiavellian sweeping graves give an impression that Brody is a god amongst men, the part of a true Roman ruler standing far above his men. The musical moment on screen with the Roman anthem is punchy and hitting on the heart, making you feel both angry and emotional at how his actions portray the man as a behemoth of life.

I’d like to feel this isn’t becoming a trend, with Western actors casually dropping over to Asia to crash the party every year or so. This year we’re joined with Cusack and Brody, previously it’s been Nicholas Cage and Keanu Reeves, Tom Cruise and Kevin Spacey (can anyone forget Spacey’s delightfully bizarre appearance in Inseparable?), can we see this tide of Western actors stopping anytime soon, or is this now the future for Asian Film? It practically feels confirmed with Matt Damon and Willem Dafoe chumming up with Andy Lau in the near future, but perhaps this could spark a turning point in Mainland Chinese films that are drastically needed? It’s a bit too much to expect less restrictions and regulations on cinema itself, but perhaps some lapsing of the rules to draw some Western names and cash could potentially help younger filmmakers in the country (and older hands) to become more creative and innovative. Delights such as 2014’s Black Coal, Thin Ice are already pushing that boundary; maybe audiences will see it stretched further in the future?

Dragon Blade feels less of a Chinese blockbuster cash-in, and more of a heartfelt adventure from Daniel Lee, with assistance from Jackie Chan. Chan hasn’t appeared more sincere and belonging on-screen since The Forbidden Kingdom in 2008, and he appears noticeably more relaxed and comfortable than he did in Police Story 2013. The narrative of Dragon Blade is notably bizarre, however you can brush that aside for a film that relies as much on the spirit and merits of its actors, than it does on the grace and time that’s been put into its set, its production value and score. Dragon Blade probably won’t be remembered much in 5 years time, as films are in production even now that are going to take the title of China’s most expensive blockbuster. I wouldn’t be surprised to see Dragon Blade snatched up by Netflix, and flogged to their online audience as being representative of traditional Chinese cinema alongside the likes of Ip Man and The Sorcerer and the White Snake, however Dragon Blade is a spectacular enough film to be a hardy representative of the Chinese cinema industry online for Western audiences.

Dragon Blade is released on Digital HD from 11 March, and on UK DVD and Blu-ray from Monday 14 March from Signature Entertainment.