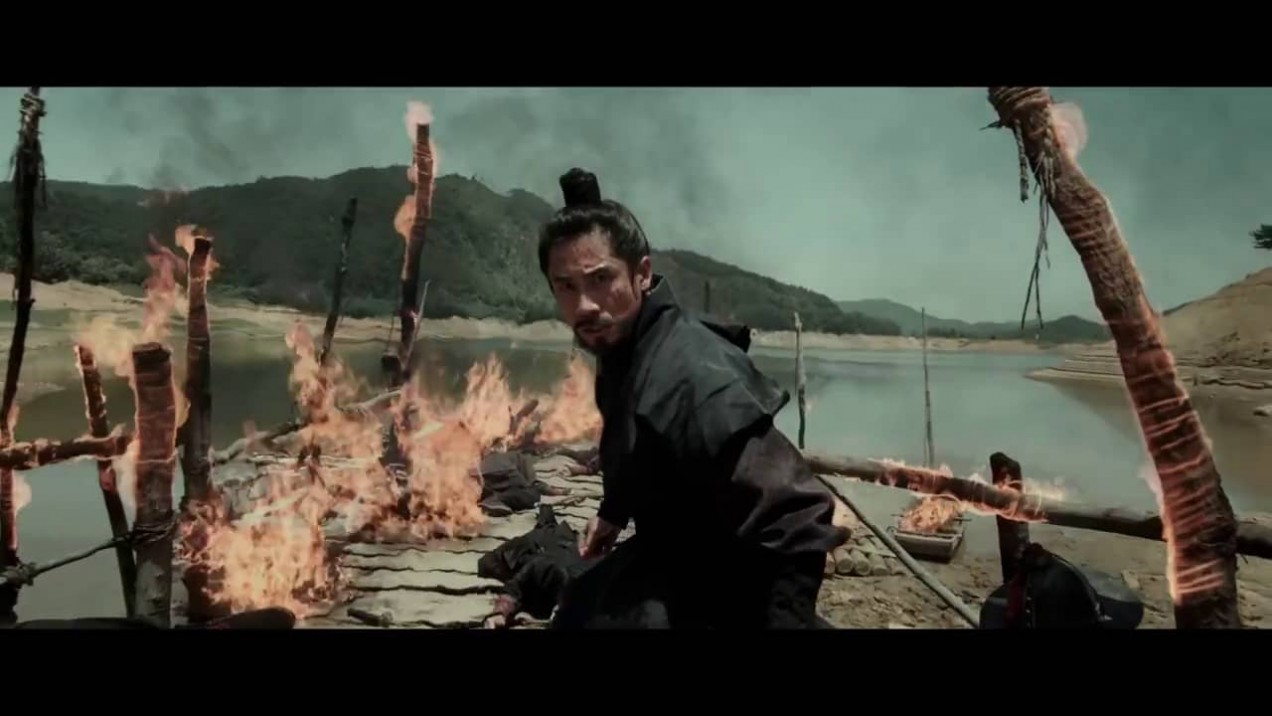 Ahn Sang-hoon, director of the thriller Blind, returns with Empire of Lust, another of the historical costume dramas which continue to prove so popular in Korea. As its title suggests, the film is a sexually frank affair, which charts the struggle between three men, played by top actors Shin Ha-kyun (Big Match), Jang Hyuk (The Flu) and Kang Ha-neul (Twenty), resulting in the expected plotting, betrayals and bodice-ripping.

Set during the early days of the Joeson Dynasty in the 14th century, the film opens with King Taejo (Son Byung-ho, The Tunnel) on the throne, the decision as to who will be his successor yet to be made, the Crown Prince Yi Bang Won (Jang Hyuk) having been rejected despite helping his father to seize power. With the threat of foreign invasion ever-present, an edict is passed that states all private armies and bodyguards should be amalgamated into the national force, and military commander Kim Min Jae (Shin Ha-kyun) is placed in charge of enforcing this and with protecting the country. A stoic man, Kim finds himself falling in love for the first time with Ka Hee (Kang Han-na, Friend, The Great Legacy), a beautiful giseang who he takes as his concubine, trusting her more than he perhaps should, much to his wife’s displeasure. Meanwhile, his son Jin (Kang He-neul), another prince, spends his time chasing women and abusing his position, leading to more trouble for Kim.

The main question with Empire of Lust is whether or not the viewer has had enough of Korean period dramas, as while a handsome and well-made example of the genre, there’s nothing here that makes the film particularly different to its many peers. To be fair, the film does have an interesting backdrop of civil unrest, and Ahn Sang-hoon’s approach is pleasingly unpretentious, favouring narrative and entertainment over historical accuracy or anything too ponderous. The plot itself is complex and multi-layered, during the initial stages at least, and there’s more than enough to hold the interest, the military and political concerns and the jostling for the position of heir to the throne allowing for plenty of scheming and deception. A reasonably intelligent script helps, and Ahn keeps things rattling along at a decent pace, with some well-timed reversals and revelations.

This doesn’t last, and the film shifts gears and focus part way through, turning its attentions from courtly manoeuvring to Ka Hee, her tragic backstory and her plans for revenge. While there’s nothing wrong with the way the film eventually plays out, from this point onwards Ahn does head things in a more generic and increasingly melodramatic direction, the relationship between Ka Hee and Kim Min-jae taking centre stage. This is undermined by the fact that neither character is particularly substantial or different to the usual kind of figures that tend to populate the genre, and the film’s climax sadly isn’t nearly as moving as it could have otherwise been. This isn’t the fault of Shin Ha Kyun or Kang Han Na, both of whom are perfectly acceptable in their roles, and it’s a shame that they’re not given much to work with – although the two princes are essentially unlikeable characters, Jang Hyuk and Kang He-neul are at least given scenery chewing duties.

As might be hoped, the film definitely does deliver when it comes to sex and nudity, with lots of scenes of sweaty coupling interspersed throughout and with most of the cast shedding their garments at one time or another. However, despite these generally being shot in a tasteful manner, the film also has a very nasty and misogynistic streak, treating its female characters very badly and featuring numerous sexual assaults and rapes – while this might well be representative of the period and of the attitude of the ruling class towards the common people, the film has a disturbing air at times which doesn’t sit comfortably with its later attempts to be romantic and emotional. The film also gets very violent in places, and though this is effective in underlining the dangerous and turbulent nature of the time, it again gives the proceedings an uneven feel that might upset some viewers.

The film’s hard edge is softened somewhat by some luscious production values, Ahn making good use of what must have been a fairly substantial budget. A great deal of work obviously went into the costumes and sets, and this really pays off, the film being both aesthetically appealing and benefiting from an impressive eye for details. The strong visuals and sense of time and place do help to distract from some of the film’s shortcomings, and Ahn directs with a steady, if perhaps unambitious hand.

This ultimately sums up Empire of Lust quite neatly, as for all its competencies and occasional flourishes, it’s hard not to come away with an impression of familiarity. This having been said, Ahn Sang-hoon is a director talented enough to make the film worthwhile, for fans of the genre or cast at least, and though it doesn’t stand out from the crowd, it does hold its own against most of its peers.

Empire of Lust is available through YesAsia.