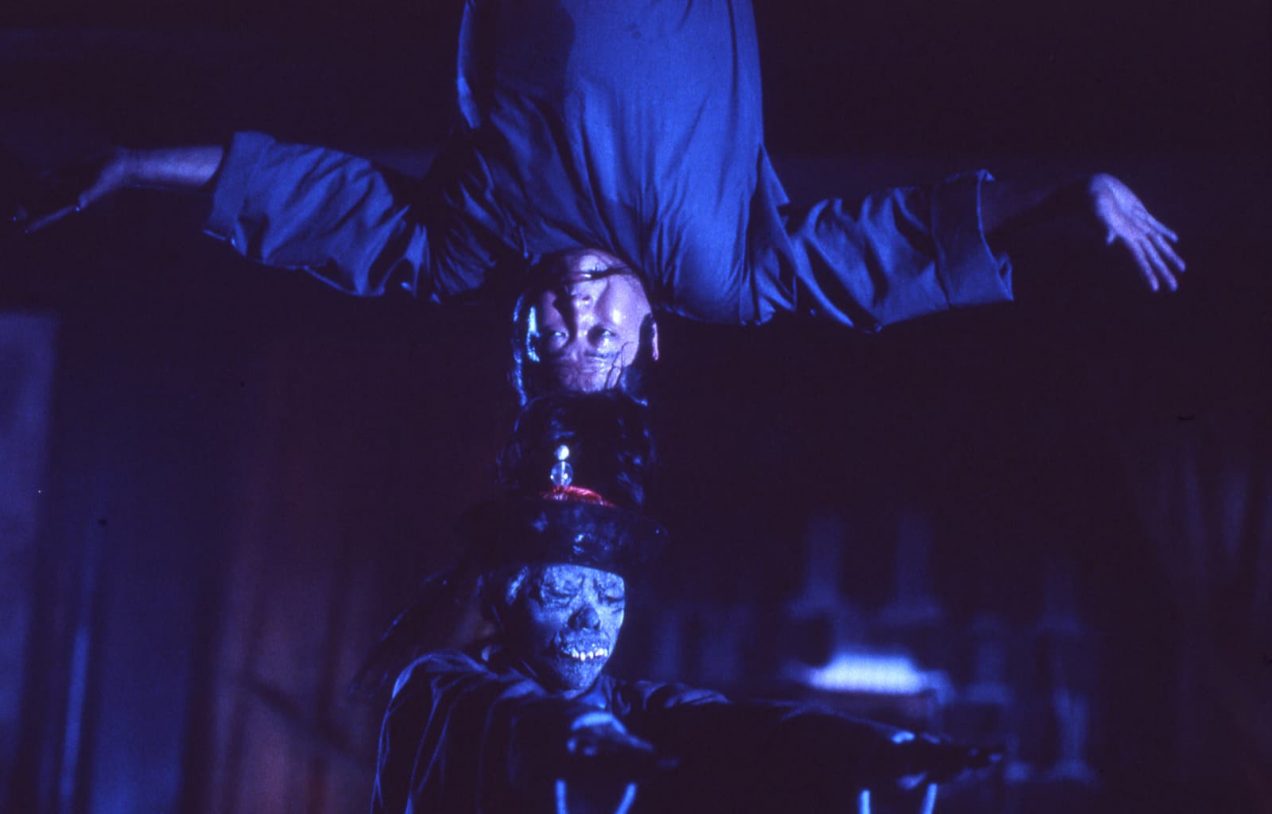 Sammo Hung gets thrown into a supernatural blender…

Cheung (Sammo Hung) is a rickshaw driver who runs across his local village. His wife (Leung Suet-mei) doesn’t really respect him, his friends are playing tricks on him, and his rich benefactor Master Tam (Huang Ha) is about to get rid of him for no reason except he came home at the wrong time. But soon supernatural forces will all take an interest in him as the netherworld attempts to get their pound of flesh while he’s just trying to avoid the police, assassins, crazy monks, and evil rich people from killing him.

I love the concept of the film that no matter how hard he tries, Cheung can’t catch a break. He wants to be seen as brave and so agrees to take part in challenges that might result in demons catching him. He escapes that but then gets caught up in shenanigans between his wife and Master Tam. He escapes that but then gets chased by a corpse. He then gets cursed by an evil wizard who uses dead bodies to attack him. And we’re not even at the halfway point of the film when we reach this point in the plot. Every time he takes a breath, he’s off running again.

Sammo’s Cheung character is a blowhard, forever trying to impress his friends, wife, and seniors. But it’s the fact that he’s still standing at the end of every hellish experience that makes him so endearing. He’s just trying to make it to the end. Encounter makes use of Hung’s marvellous ability to throw himself, other people and objects into a scene and create order out of chaos. As the scene descends into anarchy, at the centre of the affair will be Sammo’s character, trying to keep his head. The camera tracks, as punch after punch gets traded in a martial arts match, keeping Sammo in shot as he works his magic. At the same time, the plot keeps moving along, never getting impaired by logic or reason. How does the richest man in the village keep the fact that he’s trying so hard to kill our hero? I know it was a different time and place, but someone would have noticed, surely? Whatever the interpretation, as we learn more about just how unlucky Cheung is, we see just how close he comes to losing his life, soul, and standing in the community.

In that order. I loved the cast of characters and especially people like the noodle stand owner, his wife, Priest Tsui (Chung Fat), the officials at court, and Cheung’s wife. Hung fills his cast with ugly people, by which I mean they look real. They all look like they could be these people, it’s just their performance that is over the top. The winks, physicality, and mannerisms all help to sell the film’s energy and where it’s heading to. At the heart of a lot of these Hong Kong comedies from the era is a nugget of a moral to the story. The greatest gift that Sammo possesses in this endeavour is that he’s wrapped all this mayhem and laughs around it, so you don’t notice. Cheung’s greatest failing is his faith in his own abilities to overcome most problems. Only when he accepts that he just doesn’t initially have what it takes to survive whatever is coming does his character show internal growth (yes, even in a Hong Kong comedy, that can happen!). I liked the development of Priest Tsui as he turns from a junior clan member under Chin Hoi (Chan Lung) who is destroying their master’s teachings to a senior who imparts the knowledge needed for Cheung to survive the wrath of the rich man. Along the way, he tackles all the things that Cheung would be killed by otherwise and we, the audience, are the only ones who find this out.

Hung has a great range of movement throughout the film that showcase his love of comedy. The echoes of the Marx Bros. show up when he accidentally revives a corpse in an undertaker’s hut and it mimics him before attacking. The scenes where the Inspector spots him being chased by the corpse and then spots the corpse are hilarious. Plus the moments where Cheung throws himself around the restaurant are a demonstration of Sammo’s skill as a performer, trying to wrestle with his own arm while fighting everyone around him.

Delving into the underworld is something that I don’t get to see very often and in today’s climate of Chinese-made films, very unlikely to ever be made again. Films like Zu Warriors from the Magic Mountain, A Chinese Ghost Story and The Bride with the White Hair have all delved into the shadows in Hong Kong cinema but this was the first film I saw that played ghosts, spirits, and magic for laughs. Hung takes the everyman struggle in a comedy and substituted people with an axe to grind with the supernatural. I cannot say that I understood everything mentioned in the film as I’m not Chinese but I suspect the minor stuff is based on local traditions whereas the tower fights at the end are artistic license. The reason I bring it up is that Sammo Hung never lets the details get in the way of the laughs or the action. Just enough to grease the wheel and we’re off again.

The special effects throughout are of their time but have such creativity that you hardly notice any of the joins. The fights in the temple and the final fight are standout moments, giving the audience a chance to see what Sammo can do when left to his own devices. I have always felt that he has never gotten his full measure of praise. Encounter helped to create Jiangshi fiction (zombie corpses being resurrected by Taoist monks with comedic effect) and Sammo produced more films in the genre during its heyday. While deserving praise has been thrown at Jet Li and Jackie Chan over the years, Hung remains a fan favourite in martial arts film circles but hardly anyone outside that knows of him. When he turns up in cameos like Around the World in 80 Days with Jackie, I cheer because when he’s on-screen it’s a good time for the audience to have. Plus, his work over the years has run from the comedies he’s known for, action adventures, spooky horrors (like this film!), hard-boiled dramas, and more has more than paid for his entry to the right halls of fame.

Encounter of the Spooky Kind is a great comedy with the weirdest setups, but they work in a Frankenstein-like fusion where the hero might be smashing up a café table one minute then peeing next to a mimicking corpse the next. I loved the whole thing, even when I didn’t understand when Chin Hoi looked like he was going to pass out while sweating like a horse from prayer trying to wreck Cheung’s day. If you want a good showcase of what Sammo Hung can do, you can’t go wrong here.

Encounter of the Spooky Kind is released on UK Blu-ray on 21st June 2021 by Eureka Entertainment.