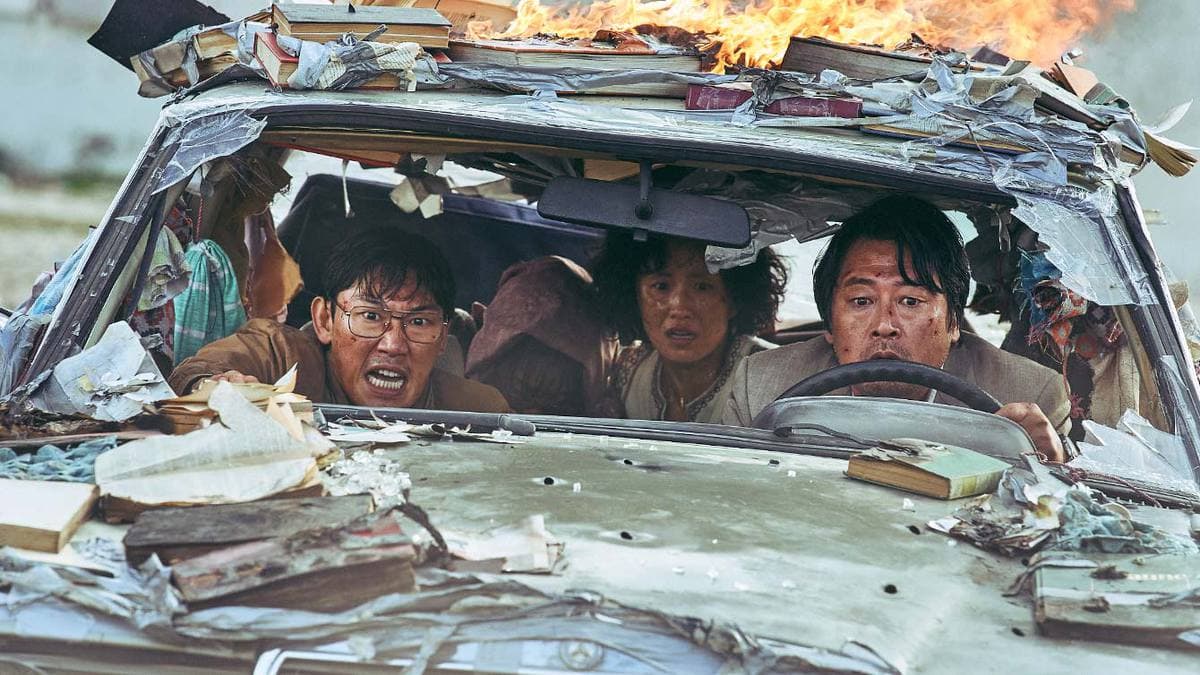 One of the first Korean films I ever saw was Arahan back in 2004 at the Raindance Film Festival in London, and I was immediately in love with the sense of style and humour that I was seeing. It was a key film in my love of Korean cinema, so I was extra excited to be able to watch and review Escape from Mogadishu the latest film from that same director, Ryoo Seung-wan.

Filmed in late 2019 in Essaouira, a western coastal city of Morocco, the production avoided the Covid pandemic, at least until release which had it pushed back to July 2021. That hasn’t affected Box-office numbers, allowing it to top the domestic releases on its first day. That it was filmed at all is incredible when you think of the logistics of multiple languages, a foreign location and casting of a multitude of diverse ethnic extras. It’s not a film that could be done in Korea and not an event that is widely known.

The story opens in Mogadishu in 1991 where The South Korean Ambassador Han Shin-sung (Kim Yeon-Seok) is trying to gain support for S. Korea’s entry into the UN and the attempts to thwart this by North Koreans led by Ambassador Rhim (Huh Joon-ho). It’s not long before the unrest and small uprising becomes the start of the civil war, turning the city into a chaotic and deadly place for anyone on the wrong side – or perceived to be so. After their embassy is destroyed, the North Koreans have to make a harrowing journey to the embassy of their “enemy” to ask for shelter and the two distrusting groups of people must work together to escape the mayhem and danger.

The cast consists of a mix of old and new faces, most of whom are working for the first time with Director Ryoo. It brings balance to the casting, preventing it from feeling too familiar in any outcome. The characters are ordinary people, not action heroes and you really can relate to how they act and feel under the pressure of such an explosive and unexpected situation. From the initial diplomatic rivalry and grift, we get a sense of the characters personalities along with some amusing situational moments that are typical of Director Ryoo. As the writer, he manages to get us to like them and be exasperated at the same time until the fighting begins and then we are totally on their side, wanting both leaders to be honourable despite the potential consequences.

It’s not the first time he has dealt with South and North Korean relationships, his spy thriller The Berlin File was a wonderfully downbeat and grimy thriller that really leaned into the North Korean spies being ruthless. Here the situation calls for a more humanitarian look at the relationship, one that is more personal and to me more hopeful that two disparate groups from a divided country can find a common purpose. In the era this event happened, South Korea was not long out of its own journey to democracy and you get the feeling some of the old fears and habits were still lingering a little. Director Ryoo shows that sometimes it’s hard to do the right thing, that the human heart can sometimes know what it should do, but be restrained by the consequences social structures put upon us.

Martial arts director Yoon Dae-hwan has achieved a monumental level of action for the scenes of the uprising that feel like genuine recreations of the event. To go into each one in detail here would detract from the impact they have on initial viewing, suffice to say they evoke the terror of the situation and the last action sequence surpasses a recent vehicular blockbuster in its execution and style. The score by Bang Jun-seok, who also worked on Ryu’s film The Battleship Island artfully adds to the tension with simple drum beats, sometimes paired with the sound design of a single heartbeat. Never intrusive, the crescendos match the action and emotion.

Dexter Studios, not only responsible for proposing the project, took on the visual effects as well and have done a fantastic job, keeping the quality of the work so high, that you are never visually tripped up by incorrect lighting or an unrealistic fx. Their previous work includes films such as Ashfall and Parasite and are a studio aiming to encompass all aspects of digital production and here participated in sound design and grading. It definitely provides consistency across production and their work is really high quality. Combined with the production design of the internal Embassy rooms: the feel of the early 1990s in a place that is far from the modern comforts of home is authentic and immersive.

Overall this is a film worth your time and there is a lot more depth to its premise than the action category it can find itself in. The contrast between external violent conflict and the quieter more introspective kind will keep it lingering in your memory – something only a film of good quality can do.

Escape From Mogadishu screened as the opening film of New York Asian Film Festival 2021, and is on theatrical release now in North America from Well Go USA.