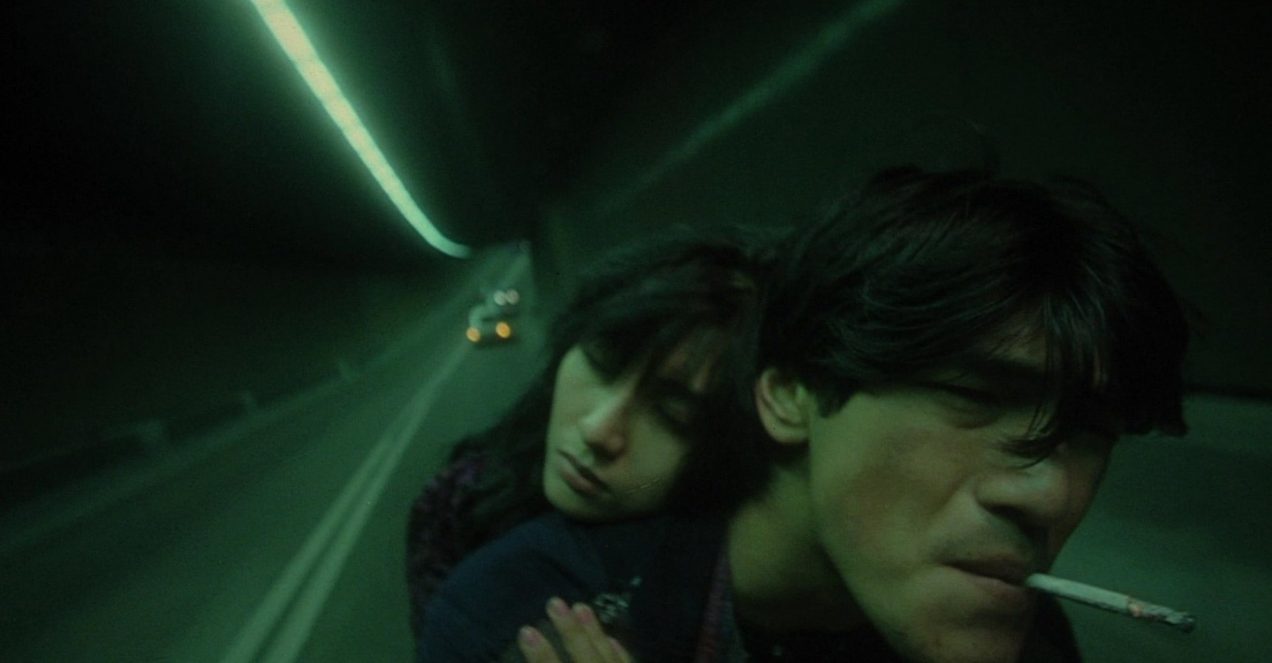 Though some contrarians will no doubt disagree, the overriding aesthetic of Wong Kar Wai’s most iconic films is the urban ennui of the late 90s. Wong bookended the period with 1994’s frenetic, youthful Chungking Express and 2000’s measured, heartbreaking In the Mood for Love. Both have a distinct sense of place: the former finding its home in malls and noodle shops, delighting in the power of the public sphere; the latter sits languidly in the semi-private space of apartment corridors. Considering Wong’s success abroad on the festival circuit, would it be unfair to say that his films have participated in something of a myth-making project for Hong Kong in the mind of those who love his films, despite the fact that the two films mentioned above find such different things to celebrate? Almost certainly. Should we view Fallen Angels as a bridge between these two different worlds? Absolutely not, though it does certainly have a similar ebullience to Chungking Express, finding the privacy of In the Mood For Love in daydreams.

Directors working outside of the English language are more often lazily lumped into the world of the auteur than their British and American counterparts, but with the remastered Wong Kar Wai collection seeing a release, it’s difficult not to attempt to find similarity and continuity between works. Fallen Angels should be viewed entirely as its own film, but it still has the jagged slow-mo, the fish-eye close-ups, and the use of slightly kitsch-y pop music that is such an iconic part of Chungking Express, so the tendency is to view them as part of the same world. Wong conceived of them at the same time, so the myth grows, but while Fallen Angels is understood by many to be a key part of Wong’s oeuvre, it doesn’t hold the same iconic status as the two other films whose titles I daren’t say again.

The plot of Fallen Angels is distinctly bifurcated; the two plotlines never really threaten to meet for much of the film’s duration. One is of a hitman (Leon Lai) who has ended up in the job because it doesn’t require him to make any decisions, looking to get out of the business; the other is of a mute immigrant (Takeshi Kaneshiro) who uses the workspace of businesses when they are out of hours to concoct schemes, eventually agreeing to help a woman seek out a blonde woman who she believes has stolen her boyfriend.

The story, and indeed the way it is shot, is constantly imbued with a sense of panic. Christopher Doyle’s camerawork will be my abiding memory of the film, because it carries what feels like the film’s mantra: in a metropolis, being near someone can be as good as knowing them.  The focus is not on making the actors or the locales seem traditionally beautiful, and in fact the city often seems skewed, individual rooms terrifyingly claustrophobic, and there is no sense of the different parts of the city fitting together into a larger whole. This is an excellent complement to the mile-a-minute plot that sees the power of telling over showing pay great dividends.

The speed of the film also helps with the fact that, not only is the film full of life, but it is deliberately and frequently very funny indeed. Chi-mo, the mute immigrant, has a particularly entertaining arc: his method of forcing people to have haircuts and take flyers from him whether they want to or not eventually leads him to a similarly committed soul who chooses hostility and violence at every opportunity in seeking the object of her ire.

But in its ebullience and panic, Fallen Angels is also bittersweet. In both stories one gets the feeling that certain elements are too good to be true: the film feels like it could easily be a series of daydreams, imagined encounters between our main players. Who is dreaming, and who is the object of the dreams is never clear. Chi-mo must be a dreamer; one of the most beautiful parts of the film is when he turns himself to amateur filmmaking, and uses a handheld camera to show an adopted father figure cooking up some steaks in the kitchen of the hostel that he runs. Those who think that Fallen Angels is a more cynical foil to Chungking Express joie de vivre must have forgotten so much of the middle of it. More than anything else, it shows that there is beauty and joy to be found in even the most fleeting of interactions.

Does this fit with the hitman plotline though? There is definitely more of an obvious cynicism there, Lai’s Wong Chi-ming is able to burst into any number of criminal hideouts, gun down all present with no possibility of retribution from the gangs or response from the police. It’s so easy that he seems more bored with the shooting than even the boastful childhood friends inviting him to their wedding that bothers him on the bus ride home. We come to realise that the main character of this plotline might be the killer’s agent (Michelle Reis), who like Chi-mo finds herself pining for an imagined relationship, oblivious to the reality of it.

Fallen Angels could be seen as an awkward middle child, but without making a value judgement that compares it to Wong’s two best-known films, there is such vivacity to be found within. Describing the plot as a linear series of events will make you sound like a giddy primary school student recounting a particularly eventful day at school to a weary parent, but I can guarantee that at least three scenes will imprint themselves on you, and that is how you will remember the film. It is not always an easy film to watch or to follow, but you can’t deny that it makes an impression, that it brings you joy.

Fallen Angels is available from 31 May 2021 as part of The Criterion Collection’s World of Wong Kar Wai Blu-Ray box set, alongside 4K restorations of As Tears Go By, Days of Being Wild, Chungking Express, Fallen Angels, Happy Together, In the Mood for Love and 2046. The US edition is available now. 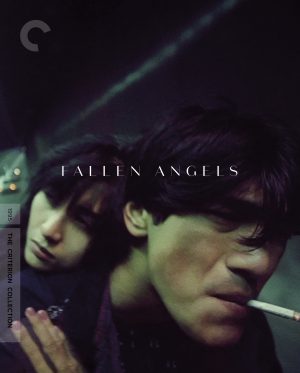 The new version of Fallen Angels comes with some nice bonus features. The best is Wong fielding a series of questions from other filmmakers and writers, including Sophia Coppola and Chloe Zhao. Because both the questions and answers were vetted beforehand, this is much more than an awkward Q&A session after an in-person talk. Though not likely to shatter anyone’s worldview, it gives good insight into Wong’s process, and most importantly, how he views his own films.

There is also a short interview with cinematographer Christopher Doyle, which feels insubstantial, but not without merit. Possibly my favourite of the special features is a short profile of Chan Man-lei, a hotel owner in Hong Kong who plays Chi-mo’s father, and ended up being nominated for a Best New Actor award as a result. Chan is full of joie de vivre in a genuinely infectious way, and this short segment is a lot of fun.