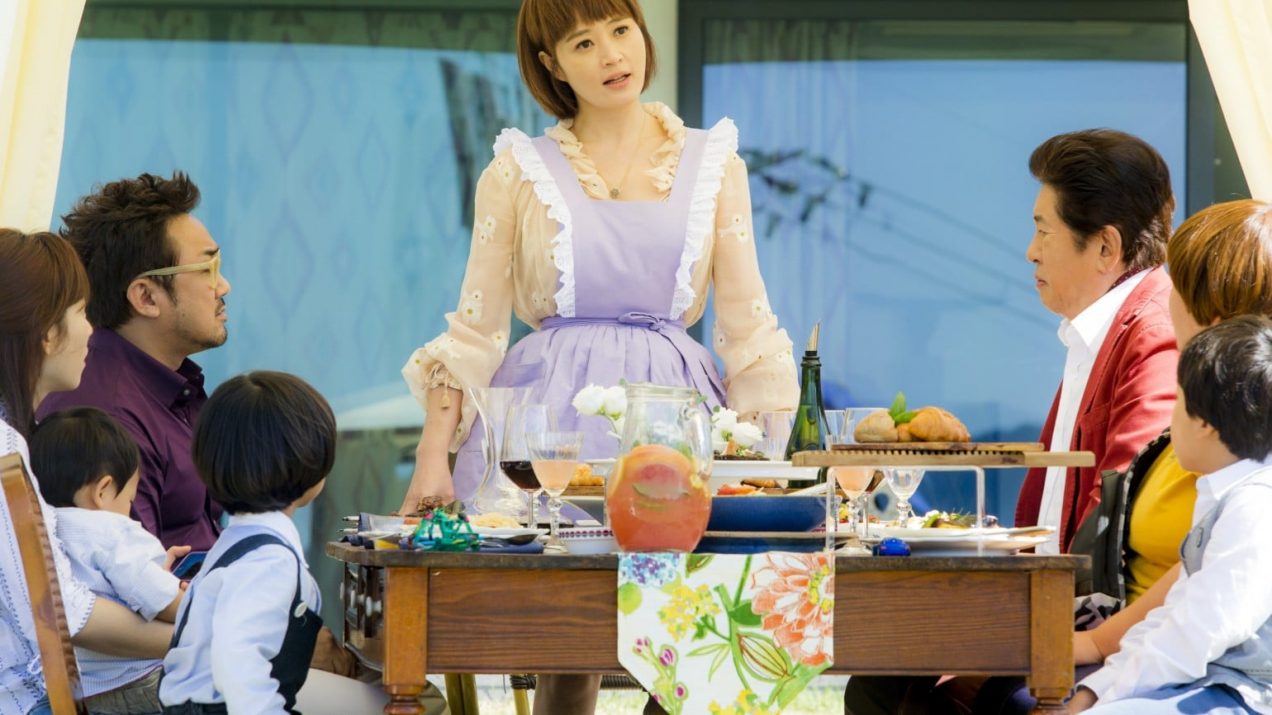 All she has to do is hide a teenager, pretend to be pregnant and lie to 50 million people. Easy, right?…

The farcical comedy is the safest trope in the genre to run to and also the most dangerous you can attempt. Too much and the audience starts groaning as you pummel them. Too little and the audience asks if this is what they came here for. Kim Tae-gon’s Familyhood knows exactly how and what it wants to say. The most surprising part about it is how deep the emotional chasms were for the characters in parts. It’s a comedy, sure, but that doesn’t stop it from hurting when it supposed to hurt.

Go Joo-yeon (Kim Hye-soo) is a TV actress who has everything at her feet. Her fans adore her, she’s an attractive woman and she dates a much younger male actor. She lives a bachelor’s existence in her house, able to entertain guests or hide away from the crowds. All of her missteps are handled by her stressed out stylist Park Pyung-Gu (Ma Dong-Seok), who is more of a minder and assistant than a mere stylist. But success in the form of awards or more recent, high profile, roles eludes her. She thinks getting hitched to her current boyfriend will bring her the happiness she craves. When she realises he’s just using her, she ditches him and in a manic flurry, decides that what will make her happy is a baby of her own. While her attempts to adopt end in failure, she’s about to intersect with someone else who’s being pushed into a corner. Kim Dan-Ji (Kim Hyun-soo) is a pregnant teenager who after finding out she is expecting a child, goes for a termination, since she doesn’t believe she could handle being a mother. At the clinic, she meets Go who seizes on the fortuitous happening and offers to pay Dan-Ji for having the baby while concocting a plan to fool the media (and her employers) that she herself is pregnant. Only Go, Dan-Ji, Go’s driver, Park and his wife know about the plan. What could possibly go wrong?

I love Kim Hye-soo’s performance as Go. As the de-facto lynchpin of the story, her crazy outbursts make for giggle-fests as she overpowers everyone around her with the idea that going against her would more detrimental than agreeing with her. Even when she’s on her own, Hye-soo’s a force of nature. The camera swings around her as a smaller object moves around a larger one in space as she talks, walks, kicks ass and takes names. Even when she loses a fight or argument, she just shrugs it off and keeps going. She pouts when things don’t go her way on her own, she freaks out on her own. She lives her life through herself but the addition of her young charge allows her to impart some of her zany energy to her. She helps Dan-Ji gain revenge (in a non-threatening way) on the boy she was with that resulted in her pregnancy. The best running gag of the movie is she’s constantly trying to improve her cooking but it never does. The other characters just smile and eat while their stomach dies a little inside. As well as that Actors react to Kim’s performance and that’s a good thing since matching her for shouting and wits would induce a kind of dramatic feedback loop. The more she does it, the more she runs out of material until she arrives at Dan-Ji and her usual tactics don’t work. Kim Hyun-soo’s performance in the first act as Dan-Ji is to provide a counterbalance to Go’s steamroller turn. Kim’s initial spoilt madam as Go, which we assume is just a cover for how she really feels, gives way to a curious hybrid of sisterly concern for Dan-Ji and childlike wonder about all the things she’d given up to become a success. The film’s great strength is that it takes its time unlocking the two characters and having them fit into each other’s lives. We see their lives and how they need each other: Dan-Ji humanises Go so she can interact with Park and her boss a lot more softly while Go gives Dan-Ji the kind of attention and affection that her sister denied her. As we spend time with them, we see that life is not rosy for the people who have to manage Go’s life for her. They switch positions multiple times in the film in terms of who’s in control but the default seems to be Dan-Ji being the more straightforward of the two and Go being the one to suggest crazy ideas and just running with her gut. But there is a natural end to their relationship the longer Dan-Ji’s pregnancy goes on and the young lady realises it first. So while they might be friendly on some level, the plan they’ve hatched is closing in on them with every passing day.

As Go’s plan starts, it seems fairly innocent and only involves her keeping an eye on Dan-Ji, courting the media and keeping her former boyfriend (who she fingers as the father) away. But as media companies, her TV bosses and the public shower her with affection and offers of jobs, her tentative proto-affection for Dan-Ji starts to waver as she loses herself in being relevant again to the public. Even Park eventually sees it and tries to warn her but she doesn’t listen. The cast moves from trying to get their head around the complex interactions that Dan-Ji and Go bring out in each other to trying to stop Go from making not one massive mistake like she usually does but a series of them. The plan, which was crazy to begin with, comes undone and Go’s previous behaviour surfaces. When she thinks that Dan-Ji has betrayed her to Dan-Ji’s older sister and facetious boyfriend, Go treats Dan-Ji like the hired help the young girl feared she was. It’s so heartbreaking to watch. We know she’s wrong but the beauty of the film is that it’s saving just how wrong Go is until later. That Hyun-soo was able to hold her own against Hye-soo in the confrontation is a testimony of her skills. She underplays the scene while Hye-soo overplays it. Then the film reveals its final surprise with the close of the second act and I figured out that the director, crew and cast have been preparing me for this act by starting me with comedy and then slowly introducing more drama while moving the characters around. When we reach the final act, we are ready for the blows. It’s a bit manipulative but it’s for a good cause as we see performances from all the cast as the choices for Go come down to her soul or her immediate happiness. 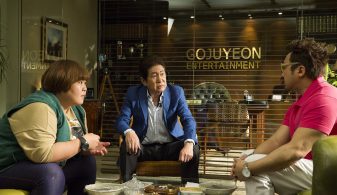 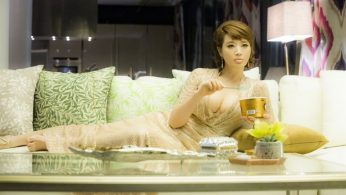 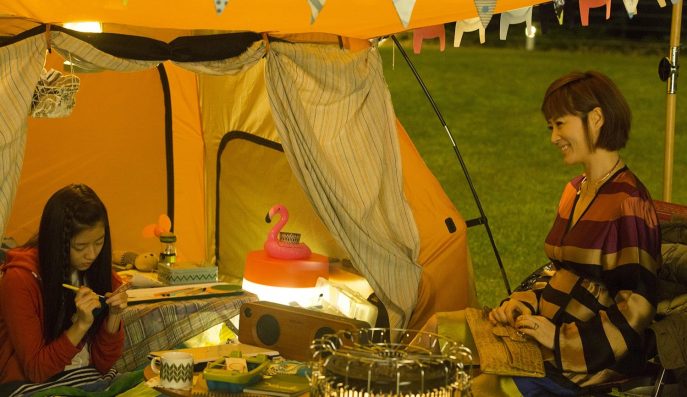 If I take anything away from the film, it’s the idea that people really want to be treated the way they would hope to be. Go wants respect but doesn’t know how to respect herself first. Dan-Ji wants to be acknowledged as worthy of respect but instead gets it from someone who is purely looking for a business arrangement. Park wants to get Go to be respectful and she only does it when she realises how much of his own respect he has sacrificed to help her. The others only get to express their love for Go after it all comes tumbling down for her. What is an ounce of fame when your self-respect is priceless?

Familyhood is all about family and the weird ways in which they form, are broken up and reform. It has a lot to say about how any society, Korean or not, treats families outside the norm. While Go’s plan is clearly unethical and illegal, as it goes on the plan alters until it’s less about a baby and more about the well being of its leads.The script is quick and never lets up for anything. But the performances of everyone help give each bout of mania some breathing room as we learn the implications for our two leads of each bump in the road and what it does for their secret plan. Both Kim Hye-soo and Kim Hyun-soo sell themselves so well that they seem pre-written for their roles. It’s a great film and a wonderful showcase of talent both in front of and behind the camera.