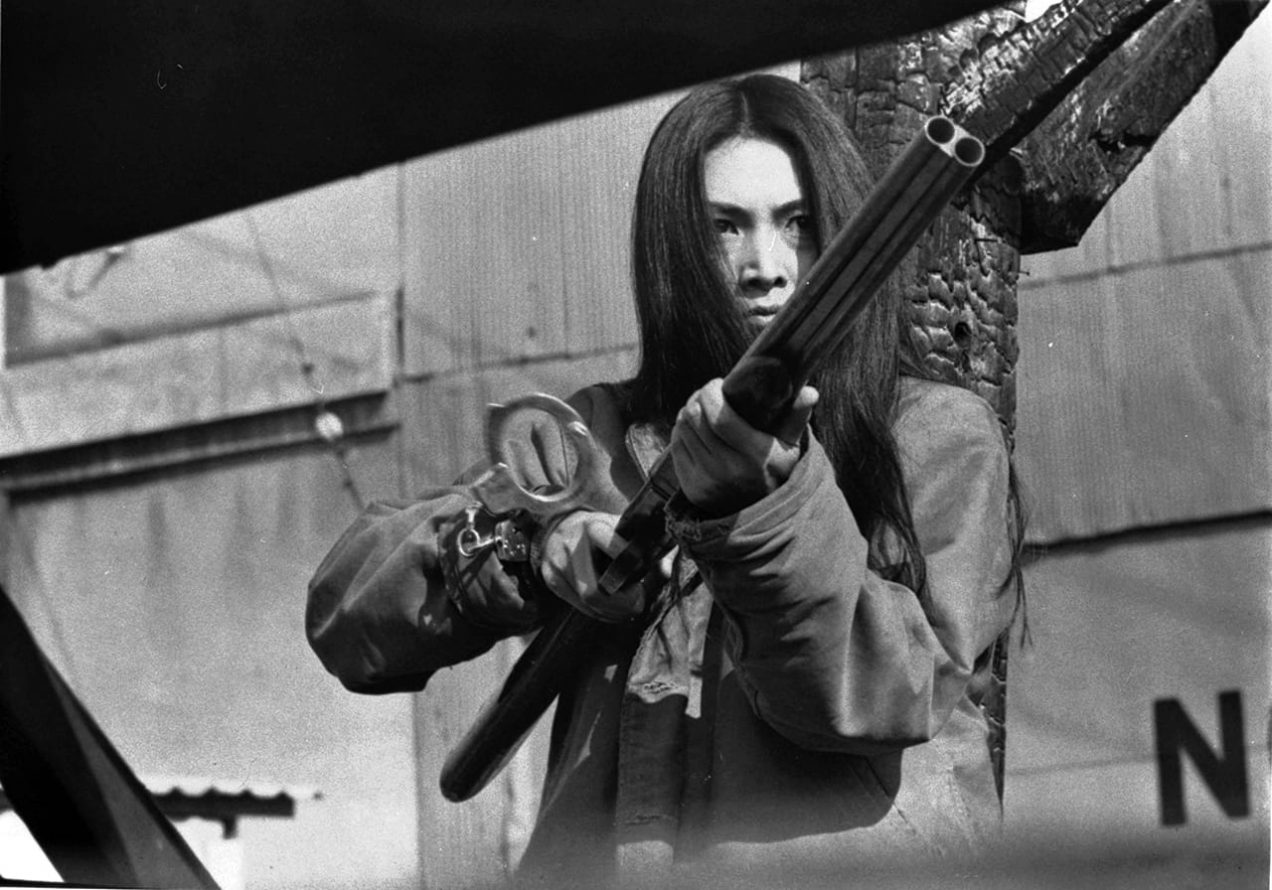 It gets bloody, then crazy and finally giallo in Meiko Kaji’s last Female Prisoner Scorpion…

At this stage in the game, you should know who the character of Nami Matsushima is and what her deal is. Betrayed by her first lover, a corrupt cop, she attacks him and is sent to prison. From there, her natural sense of vengeance on those who imprisoned her is let loose and today she remains a fugitive, on the run but never outgunned.

At this stage in the franchise’s history, executives at Toei must have been faced with a similar choice to Nikkatsu when their Stray Cat Rock series rolled on: it started out slightly crazy before going into full blown nutty and out of the wall by the end. It’s therefore not a co-incidence that frequent Stray Cat director Yasuharu Hasebe is in the chair for this Sasori movie. He brings a welcome change to series regular Shunya Ito, but to be fair to Ito, honestly, I don’t know what else the man could have brought to the table this time. Sometimes, you just have to load a couple of bullets into a gun, fire randomly and see what happens. Hasebe goes for full theatricality as the curtain closes on Meiko Kaji’s final performance as Matsu. His film is bloody, vengeful and crass in all the right places.

Setting up a fantastic opening gambit of Matsu actually being captured by new corrupt cop Hirose (what is it with Matsu and these guys?!?!) who informs her she’ll be hanged for what she did to Sugimi and all those other detectives. I love how the series again and again just runs with the idea that the entire Tokyo police department is corrupt and degenerate but criminals are somehow worse simply for being criminals. It’s like Ito and Hasebe are laughing at the notion that the police are an organisation that you should blindly believe. Well, whatever the intentions of the filmmakers, the net result is Matsu escaping again and after being severely wounded, ends up being rescued by Teruo Kudo (Masakazu Tamura), a lighting programmer at a burlesque show, I guess you could call it. In any event, Kudo has a history himself with Hirose (Hiroshi Tsukata) and was scalded by Hirose using a kettle on his genitals. The film leaves it ambiguous as to whether or not Kudo’s protest group really were dangerous or not. With his brutalising manner and cold use of authority, Hirose really isn’t a man you feel sympathy for. So after falling for each other, the two lovers are faced with the prospect of going up against Hirose, alone.

Hasebe brings an almost Italian Giallo feeling to some of the trippier moments as Matsu kills certain people. Despite the fact that Giallo films weren’t a thing yet in Italian cinema, I would say that it has more to do with Hasebe’s intentions with the story and characters than any kind of cinematic parallel development. He goes full on in terms of the crazy factor for the prison scenes and only the fact that we don’t have long to spend there is the only reason there’s not even more crazy on display. Hasebe’s direction of Kudo and his protest group harks back to the revolutionary group that Meiko Kaji was a part of in Stray Cat Rock: Wild Jumbo. At first they just wanted to have fun and raise a ruckus but soon enough they attract the attention of Hirose and his team. This is evidenced by Hirose keeping a gun in their old hideout and his treatment at the hands of Hirose and his goons. What’s amazing about Kudo is that he’s unique in the annals of the Sasori series: he held out under torture for longer than anyone else. Yuki in Beast Stable caved in almost straight away. None of the girls from the first film lasted very long. But Kudo survives only to fall at the last hurdle and has to give away Matsu’s location. Now, I will come back to Kudo and his eventual reunion with Matsu but for now, let’s talk about the film and its aims.

As a hybrid of the last few films, Grudge Song splits its time between the outside and prison. Hiroshi Tsukata as Hirose proves to be a worthy foe to Matsu, pursuing her across miles of back alleys, wasteland and the halls of a women’s prison to exact his revenge on her. For him, it’s about the chase and destroying her. For her, it’s about destroying him and living to tell the tale. So, Hasebe makes the two a side of the same coin. Much as how Matsu will manipulate anyone who crosses her to help her scheme, Hirose will beat people to a pulp, use family members against others, have his goon squad (these are police officers, I need to stress) rape an innocent woman so she’ll help them destroy Matsu. Truly, he is the most sophisticated and heinous of Matsu opponents. It’s a credit to Tsukata as we never once feel sorry for him even after his wife dies.

I think now would be a good time to discuss the character of Matsu as this will be the last time Meiko Kaji will play her. Kaji’s performance as been consistent, steady and true as her character evolved from betrayed woman to urban myth (be a good gang member or Sasori will get you). Along the way, she stopped caring about background people. The Matsu from the first film might not have cared about the people around her but she never used them to the same levels of manipulation that the Matsu from Grudge Song does. She destroys a death row inmate for no other reason than she wants to put the warden and guards on edge before her own execution. The woman in question did nothing to her but in Matsu’s mind, if she succeeded in escaping, great. If not, no matter, Matsu would find another way to get out. I don’t know if it was intentional but Hasebe changes Matsu in this film far more than Ito ever did during his time charting Matsu’s arcs. It’s almost as if he needed to show that other her skin there was something other than pure vengeance. Does this make Matsu a villain? Consider that she swears revenge on Kudo simply because he betrayed her after days of torture. This is a man who while helping her get information from Hirose’s wife, watches as helplessly as she does when Hirose’s wife accidently falls to her death. I wonder how the original Matsu would have felt? Hasebe also raises the stakes by making Kudo her lover in the film. Would she have been as vicious if they were not? I suppose in the final analysis, it doesn’t matter since Hirose is such a villain that Matsu’s anger and rage pale in comparison to his apoplectic hatred of her. He really wants to destroy her and he’ll become what she is to him in order to stop her. But does Kudo deserve the fate the film has in store for him? In my mind, no. He was an innocent man who tried to help Matsu, got ground up by Hirose again and finally has to face a crimson minded Matsu in the final reel. I don’t feel he deserved what he got but then the series is predicated on good people being destroyed for the expediency of others so he’s not alone in his misery.

The finale of the film is also a fitting finale to the character and Kaji’s run. Full to the brim with beautiful wasteland locations and sets back at Nikkatsu, Hirose and Matsu square off and only the quick can survive. The colours, setting, performances of the leads and Hasebe’s direction all contribute to a fantastically driven and surreal ending where Meiko Kaji walks away from the camera (mirroring her entrance into the film) and into the mists of legend on the streets of Tokyo.