The landmark film that cemented Bruce Lee’s career as a kung fu star, and propelled his popularity across the world..

Bruce Lee’s second movie for Golden Harvest is regarded by many as the peek of his all-too-brief career. The revenge flick that gave birth to a host of imitators throughout the seventies, director Chang Cheh collaborator Ni Kuang’s uncredited work on the script struck gold – being just the right mix of Chang’s ‘angry young man’, Bruce’s undeniable screen presence, fantastic martial art sequences and the subject of Japanese occupation.

Based on a true story, Bruce Lee plays Chen Zhen, a student at the Jing-wu Min school, who returns home to find his beloved master has suddenly died. The student’s morning at the school is soon disrupted by a neighbouring Bushido school led by Master Suzuki (Riki Hoshimoto). Angry at the prejudice of the school against Chinese, Chen is not afraid to stir up trouble, paying them a visit and defeating all Suzuki’s students.

Such embarrassment for the Japanese school doesn’t go without reprisals, and Chen is asked to leave his own school. But Chen begins suspect there may have been a more ominous reason for his masters death… 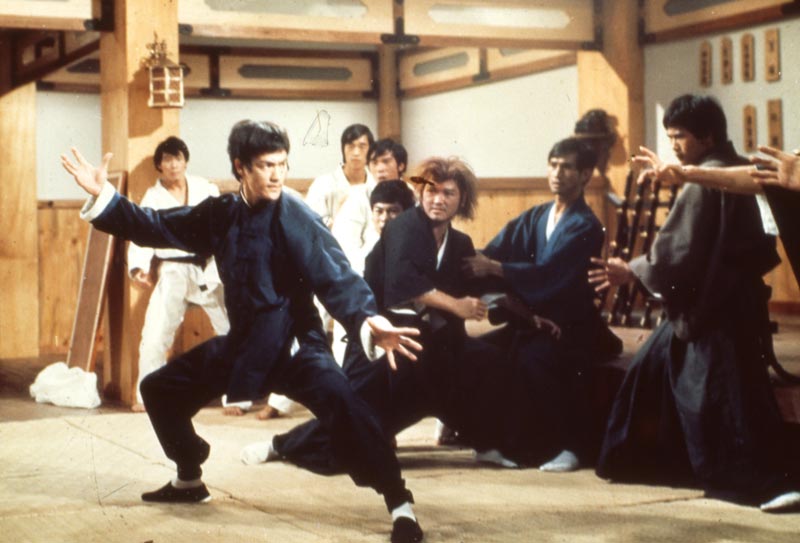 Fist Of Fury owes a great debt to the work of Chang Cheh, particularly Chang and Ni Kuang’s previous script collaboration Vengeance!. Not only does it follow the same template, but even David Chiang’s character is almost the double of Lee, wearing the same white suit that introduces Lee’s character. Ni’s predilection for angst ridden, James Dean style leads give Lee a strong, if undemanding, character to work from.

The canny move of having the set the film during the Japanese occupation was what really paid off for both the picture and Lee himself. Examples such as the banning of Memoirs of a Geisha in China, where Chinese were cast as Japanese, stand as a testament to how deep and lingering those scars run. Scenes like when Chen is confronted with a sign that says ‘No dogs or Chinese’ helped turn Lee into as much a hero for downtrodden Chinese as the character he was playing. The character also inspired the films Legend Of A Fighter and the Jet Li vehicle Fist Of Legend. 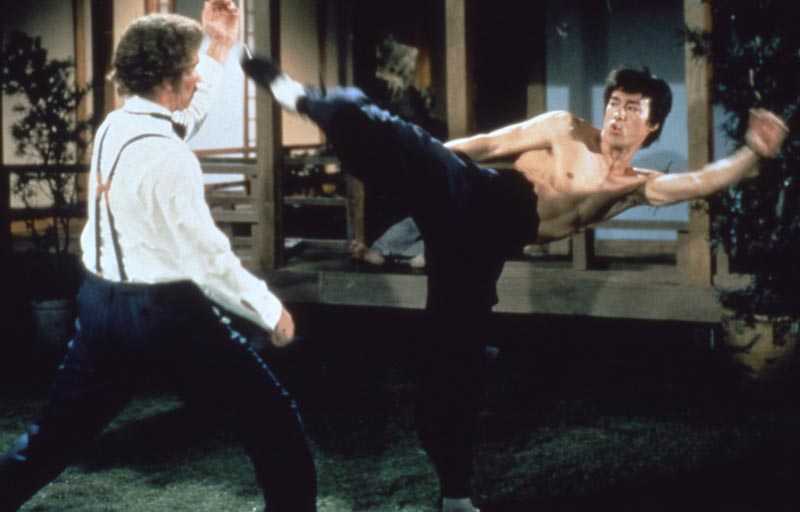 Lo Wei’s direction doesn’t match Chang Cheh’s feverishly visceral, violent efforts on Vengeance!, but Lee’s own fight choreography leads to some of the most iconic sequences in martial arts movies. The scene where Lee fights the entire Bushido school, for instance, has been referenced by many films including Jet Li’s Bruce Lee homage Kiss of the Dragon.

Such sequences lift Fist way above it’s predecessor The Big Boss, even if it loses the humanity of that film. Its phenomenal popularity bred so many imitators, all drawing on that Chang Cheh model of the male lead, that humour and humanity were often lost to the one-dimensional tale of a lead hell bent on vengeance. The Hong Kong market became flooded with half-baked kung fu revenge flicks, few with any saving grace, and none with the added benefit of Bruce Lee himself. Oh yes, before Tsui Hark and John Woo spearheaded the Hong Kong New Wave, it was indeed a sad period for Hong Kong cinema.

Not that the blame can be laid at Lee’s door. His subsequent debut, and only completed film as director, Way of the Dragon, restored that humanity, and surpassed Fury both in plot (though still minimal) and fight scenes – the epic and neatly comic battle with Chuck Norris being responsible for turning the karate champion into a movie star (you might say unfortunately!).

Fist Of Fury is a classic and essential viewing for martial arts fans.

Fist Of Fury screens at the BFI Southbank in July as part of the Swordsmen, Gangsters and Ghosts strand. A Century Of Chinese Cinema continues at the BFI until mid-October.

When Hong Kong Legends originally brought out Fist Of Fury in the UK five years ago it was an important release for kung fu fans. They had already built up a solid reputation for quality transfers on films where the previous Hong Kong releases had often been shockingly bad. Most significantly, their release finally restored the nunchaku sequence to the film, long deleted after the British Film Council decided it was influencing too many youths to get hold of (and use) the offending item.

Though following releases surpassed it with the amount of material included on the DVD, for many Fury was the peak of the Little Dragon’s brief career. So what is there to recommend the new ‘platinum’ 2-disc release?

Honestly, if you already have the former DVD, not an awful lot actually…

Apart from the ownership of the film having passed from Media Asia to Fortune Star, the alleged new transfer does little to improve what was already a good quality film. In fact, the main difference is that the colour balance is much less saturated. Knowing how Hong Kong filmmakers and studios, like the Shaw Brothers, loved their movies drenched in glorious colour, you can’t help feeling that the original balance was much closer to what had been intended.

Along with new 5.1 mixes for the Cantonese and English dubbed soundtracks, this version restores the original mono Mandarin soundtrack. There’s also a brand new commentary by Hong Kong film expert, Bey Logan, but it’s difficult to imagine he would have left anything out the first time around.

Then there’s the interviews – a whole barrage of folk all to ready to eulogise about how great a man he was, how great it was to work with him. Sorry, but it’s all stuff we’ve heard a million times over, and rarely – perhaps with the exception of Nora Miao’s recollections – does it give us any new insight into the man himself.

It all seems rather premeditated to appeal to devotees who must consume all they can about the Little Dragon, in whatever form they can – sadly a market it’s all too easy to exploit. There’s a lack of any real gems – like the restoration of over 40 minutes of the original fight sequence used in Game of Death that accompanied HKL 2-disc DVD release. It even made that release of that abysmal film forgivable (but surely not Game of Death 2?)

Bottom line: if you don’t have the previous release, then this is the version to get. If you do, then you’re best giving this a miss unless you happen to be a real Bruce Lee fanatic.