I really wanted the first movie I reviewed to be a special one in my mind and heart, and here it is – Shaw Brothers’ Five Superfighters. A tale of bravery and vengeance, learning and progressing, skills and wisdom, and good versus bad. It was one of the first movies I ever watched and so I am especially nostalgic about it.

When I saw it for a very first time it was a German VHS copy, which had Bulgarian dubbing over it. One person read all the roles, both male and female: it was a bit strange at first, however once you see more than 100 movies with the same dubbing and voice over it’s not so strange anymore. But it was still funny the first time 🙂 Anyway, when years later I came across the DVD I grabbed it, and now it holds a treasured place among the favourite movies in my collection. 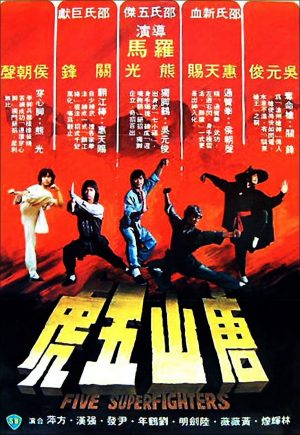 But I’m not here to talk about the sources of getting the movie, but about the movie itself. One thing that sets it apart from most of the films I have watched is its memorable cast of characters, although the plot is quite simple. It centres around three kung fu students – Tien, Fu and Chi (played by Leung Siu Hung, Austin Wai and Wu Yan Chun respectively), having been beaten along with their master Wan Tien Hsin (played by Hau Chiu Sing) by a baddie who goes by the name of Ma (played by Feng Kuan aka Kwan Fung), split and search for other masters, or Sifu, to improve their skills and have their revenge on the baddie.

A simple and clear premise indeed, but the execution was flawless – the movie follows quite a linear narrative, all objectives are set out at the beginning and all that is left is to watch as the action unfolds for all our heroes, with the obligatory training sequences thrown in for a good measure.

All the characters are typical for the genre itself – we have the bad guy, we have the good ones, both sides to a contrasting tones, as seen in many movies from that period. Shaw Brothers studio was at its peak during the 60’s and 70’s with its competitors trailing far behind.

However at the end of the 70’s this changes, with Shaw Brothers’ monopoly ended with the emergence of some strong martial arts films by other producers and companies – Seasonal Films helmed by Yuen Woo-ping, and Ng See-yuen proved to be a tough contender for a share at the cinema audience, newly created Golden Harvest lead by Raymond Chow (a former Shaw Brothers’ executive) who was able to recruit the Three Brothers – Jackie Chan, Sammo Hung and Yuen Biao under his banner.

Five Superfighters follows the successful trend of “drunken kung fu” films, which were on the rise after the phenomenal achievement of Drunken Master the year earlier. Shaw Brothers wanted to compete with Seasonal Films’ product and developed its own story and characters for this attempt, adding and unusual twist.

Here the familiar mixture is stirred with all the right ingredients: we have training sequences, where our heroes endure challenges and obstacles and a drunken style scene, which proves to be of key importance during the final showdown. Ma as the main baddie is a great character, despite only being present at the beginning and end of the film. However it was a memorable entrance and even more memorable finish as it is clear his fighting skills are a cut above those of the others. The sheer audacity of its presence, the calm and calculated manner of beating different people on screen, combined with his evil charisma are the qualities which stood out among the rest of the characters. The end fight reminds me of The Raid final bout – the same intensity, although not the same brutality, but in both I was wondering out loud when the bad guy would be killed, as he was really a tough nut to crack.

On the other hand, the script isn’t a masterpiece, the sets are all simple theatrical backgrounds, and most of the action is back-to-back fighting scenes, but made with such fluidity and precision, which on the other hand provided the main engine for the whole film and gradual motivation for all our characters. What more does a martial arts movie fan want? For me, the long fighting scenes, minimum cuts and editing, uncomplicated characters and an easy to follow plot make this one of my favourite films ever.

Considering the transfer of this old movie – IVL did a great job in cleaning up the image (although only DVD) and adding an additional 5.1 audio, next to the original 2.0 in Cantonese. It can be found in most of the Asian retail sites, however be very cautious, as most of them offer the movie only in Region 3, so you should have a region free DVD player in order to view it.