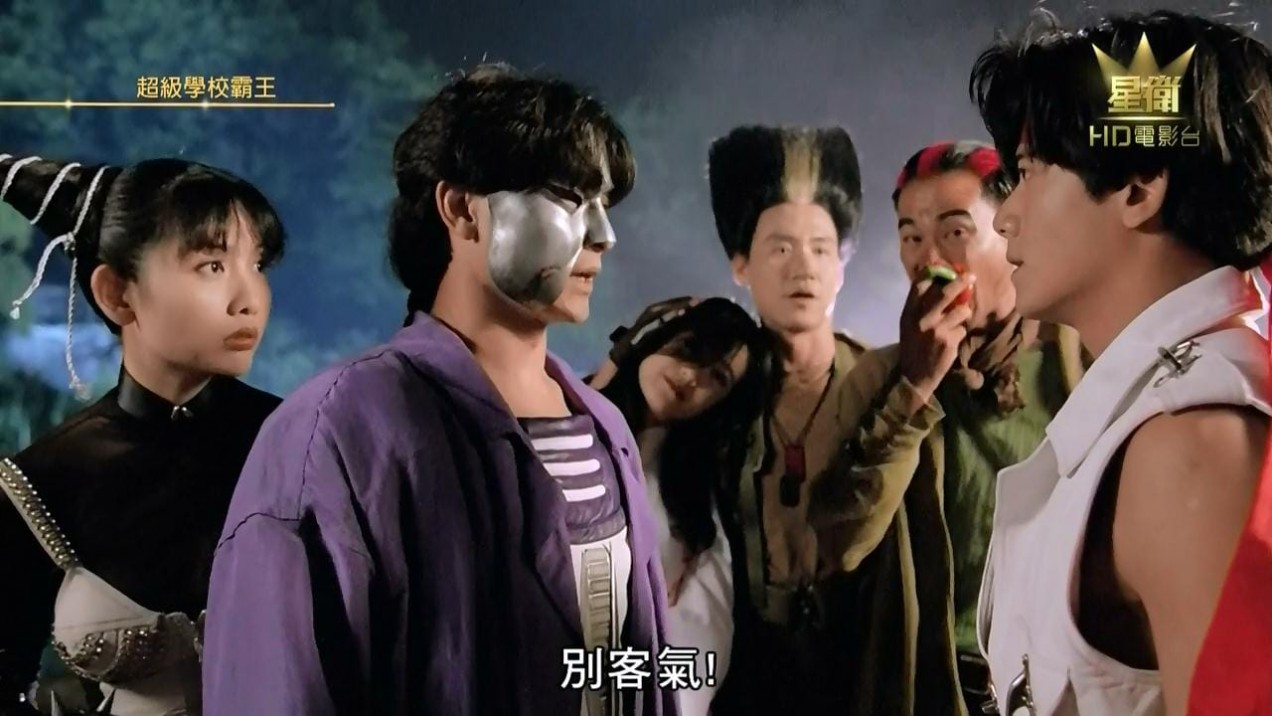 Wong Jing is one hell of a filmmaker, who has thrived on more crowd-pleasing films than films that were more inclined to artistic fare. Back in the nineties, he had always made films on genres that were in at the time, whether it was the martial arts genre (i.e. High Risk), the erotic thriller genre (i.e. Naked Killer), the gangster genre (i.e. Young and Dangerous) and of course, the broad comedy genre (too many to count). Sometimes, he mashes all of these genres all at once in quick succession, with no care in cohesion. But what is also notable of Wong Jing is that he created the gambling genre, started with the ultra-popular film, God of Gamblers, starring superstars Chow Yun-fat and Andy Lau. And, he made many films with superstar Stephen Chow, that were box-office hits (i.e. Royal Tramp 1 & 2, Hail the Judge!, The Tricky Master and others). But in Future Cops, he has gone all out in terms of star-power and insane genre mash-ups that would easily make it a cult classic, but does it qualify as a film?

Future Cops starts off in a futuristic world of 2043, where Stephen Chow’s Fight Back to School franchise has reached its 42nd sequel. Seriously, I didn’t make this up; that’s a joke in the movie. We see a megalomaniacal madman with a strange resemblance to Street Fighter’s M. Bison, known as The General (Ken Lo), who is in a high-tech prison, due to some evil deeds. Around that time, The General’s cronies, known as The Future Rascals consisting of Thai King (Billy Chow), Toyota (Tuan Wai-lun) and Kent (Ekin Cheng), create a time machine to use to travel back to 1993 to kill the judge, Yu Ti hung, who sentenced The General to imprisonment. As they are attempting to turn on the machine, The Future Cops, consisting of Ti Man (Andy Lau), Broom Man (Jacky Cheung), Sing (Simon Yam) and Lung (Aaron Kwok), attack them with full force, but unfortunately, the time travel was successful. To save the judge, The Future Cops will go back in time to find Yu Ti Hung before The Future Rascals do or else The General will be free and chaos reigns and blah, blah, blah. In 1993, we meet Tai Hung (Dicky Cheung) a 24 year-old schoolboy loser who gets bullied at school by the school gangster Kei On (Andy Hui) and at home by his sister Chun May (Chingmy Yau). The only thing that keeps his sanity in check is his best friend, Choi Nei (Charlie Young). He then, by some strange coincidence, meets The Future Cops and they all team up to find Yu Ti Hung.

Judging from the screenshots, this is a movie that is not meant to be taken seriously. If you do, you will possibly get an aneurysm. And also by the screenshots, you can see the characters are obviously inspired by either characters from Street Fighter, Dragonball and even Doraemon. Wong Jing’s love of videogames was evident in City Hunter and My Schoolmate, The Barbarian, but none more than in Future Cops. Originally, the film was meant to be an adaptation of Street Fighter, but the film company couldn’t get the rights; therefore Wong Jing basically compiled new characters and chucked them in a story that is a rip-off of Fight Back to School and The Terminator. And boy, does the slipshod feel of the story show. Story details do not make any sense (What is the point of the electric lying chips?); plot holes are everywhere (Why doesn’t Lung join the Future Cops? How can the characters lie profusely even when they have the chips?) and the performances are dialled up to 11…thousand (I’m looking at you, Dicky Cheung!). Whoa, almost felt the aneurysm coming there. So what is it that makes the film such a cult classic if it breaks all the rules of film-making? The cast, for one thing.

Boy, does this film have star-power! And they are committed to Wong’s direction from beginning to end, which brings out a lot of fun. Andy Lau is pretty much playing another version of himself (complete with dancing) but his performance hews more on charm rather than smarm. Jacky Cheung overacts in such a charming way (or maybe it was his hair) that you want him to succeed in getting the girl as well as completing the mission. Simon Yam unfortunately is just there, looking glum and probably waiting for another Category III film to overact in. Ekin Cheng (in one of his early roles) exudes some of the cool charisma that is reminiscent of his role as Chan Ho-nam in Young and Dangerous and alongside Aaron Kwok, provide an unintentional teaser for Storm Riders, as they briefly duke it out. The rest of the supporting cast are amusing (i.e. Richard Ng, Kingdom Yuen, Andy Hui) but the female cast members (excluding Kingdom Yuen and Chingmy Yau) are relegated to flower vase roles, like Charlie Young, in her first film role. But the litmus test on enjoying the film depends on how much you can tolerate Dicky Cheung. I like the actor and I thought he was fantastic in his portrayal of Sun Wukong in the Journey to the West HK series, but in a lot of his 90’s movies, he can be infuriatingly hyperactive like in Black Panther Warriors or Holy Weapon and others. In Future Cops, he’s a little mellowed but still, he can definitely put off some people, I guarantee it.

Another plus to the film is the sheer energy and pacing Wong brings to the table. If a joke does not work, ten more will follow and the audience will get to see if it sticks. A lot of them work due to its visual absurdity and the mimicry of Japanese media, like when Andy Lau and Chingmy Yau are suddenly transported into an arcade game of Super Mario Bros. Guess which of the two plays Luigi? Other jokes work mainly because of the involvement of the stars. There’s a whole music video dedicated to Jacky Cheung singing one of his hit songs, and the video references films like the Patrick Swayze classic, Ghost. Some of the jokes work due to Cantonese wordplay, however esoteric they may be; and of course, there are references to other films that are just random in their inclusion. Also adding to the frenetic feel is Ching Siu-tung’s action choreography. While it may not offset all of the budget problems, the speed and ingenuity of the choreography is a sight to behold. So much so, his videogame style of choreography will be used again in City Hunter and My Schoolmate, The Barbarian. It’s just a shame that there’s very little in terms of fight scenes apart from the beginning and the final act.

To summarize (before I go on a hell of a lot longer), the cast and sheer chutzpah alone makes Future Cops a cult classic that will reward the adventurous film viewers out there. As much as I hate to say it, I do wish they would make more films like this these days. And no, Future X-Cops definitely does not count.