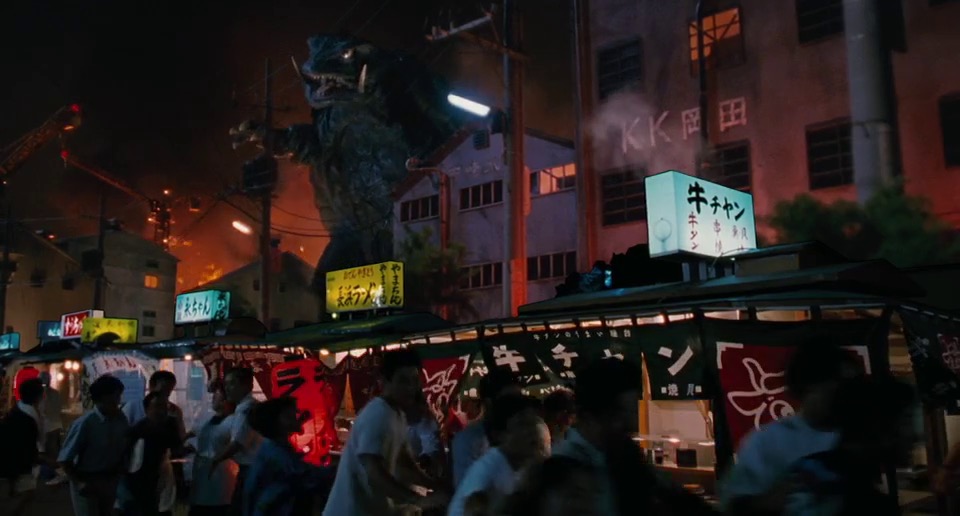 A successful reboot succeeding in honouring Gamera’s past, while also evolving this iconic Kaiju in a meaningful way…

Seeing the success of Toho’s Godzilla series, Daiei Film’s studio head Masaichi Nagata decided, obviously for financial gain, to create a Kaiju film with his own company. Little did he know that his fantasy of a tortoise flying alongside his aeroplane would become such a success and that his “Godzilla rip-off” Gamera would become a Japanese icon in his own right.

The enduring popularity of Gamera, of course, led the Daiei Corporation to reboot the series for a new generation. In contrast to his original outing, this ninth instalment featured, by Japanese standards, high production values and expensive special effects.

One day, off the eastern coast of the Philippines, a large ship carrying a dangerous amount of plutonium runs aground on a giant floating atoll. A team of scientists led by Naoya Kusanagi (Akira Onodera) set out on their research ship ‘Kenzaki’ to find and investigate this rather unusually large atoll. On the atoll, they find numerous orihalcum amulets and one stone slab decorated with Etrurian runes. Suddenly, after excavating the stone slab, the atoll starts quaking. Yoshinari Yonemori (Tsuyoshi Ihara) falls into the water and sees an eye and a tusk.

Upon hearing that her professor has gone missing on Himegami island, ornithologist Mayumi Nagamine (Shinobu Nakayama) decides to go to the island and investigate the giant bird rumours by herself. While she is, at first, very sceptical about the idea of giant birds, the discovery of her professor’s pen and glasses in a giant bird pellet is enough to convince her the rumours are true.

While changing things about an iconic character is always risky, the changes made to Gamera in Gamera: Guardian of the Universe, the first film in the Heisei reboot trilogy, succeeds in making this beloved Kaiju turtle even more iconic than he already was. With his rendition of Gamera, Kazunori Itō successfully honours the classic elements of Gamera, e.g. his peculiar ability to fly, while also evolving him in a meaningful way, i.e. by giving him retractable spikes protruding from his elbows and the ability to shoot plasma fireballs from his mouth.

The most radical difference between Gamera of the Showa films and the Heisei films is nevertheless not to be found at the level of abilities, but at the level of his origin. Gamera is not, like in the Showa films, a prehistoric giant turtle accidentally awakened by an atom bomb but an ancient human-made defender. While one could argue that rewriting Gamera’s origin constitutes a subtle depoliticization of the narrative, this change of origin was, in our view, a necessary step to radically differentiate him from Godzilla and provide a solid ground for his ‘surprising’ benevolence.

Gamera: Guardian of the Universe is, contrary to what one might expect, not devoid of social commentary. When Shinobu Nakayama tries to give an explanation as to why the dangerous Gyaos eggs suddenly hatched, she contends that environmental changes (i.e. global warming) due to unrestrained industrialization as well as our reliance on plutonium could be the underlying cause. The Gyaos are, in other words, a symbol of man’s technological disturbance of the complex natural system called nature. If the genetically modified Gyaos are reminders of our destructive presence on this earth, how should we then understand the benevolence of Gamera? Should we understand Gamera as a kaiju who, via a blind benevolence, allows humanity to keep on destroying the earth? We leave the question open.

What makes Gamera: Guardian of the Universe so enjoyable is the rhythm and the energy of the narrative. Kazunori Itō and Shusuke Kaneko fully understood that what the spectator desires from a Kaiju narrative is not a long-winded exposition with little to no action-sequences, but a swift concatenation of excitement thrilling set-pieces with enough exposition to give the narrative’s development a decent coherence.

While the special effects, according to contemporary standards, are of course bad – and sometimes awfully bad, the special effects are functional and mostly deliver what needs to be delivered, which is pleasing and thrilling kaiju action. Gamera: Guardian of the Universe, in fact, successfully evades producing the very feeling of disbelief that would problematize any enjoyment a spectator can extract from this film.

The composition of Gamera: Guardian of the Universe is decent and straightforward. One nevertheless feels, especially because a variety of shots (i.e. fixed, fluid as well as shaky dynamic shots) are used, that the composition lacks a certain thoughtfulness. This is especially evident in tense scenes where the composition does little to visually heighten the tension. Nevertheless, in some cases Shusuke Kaneko does utilize the expressive dimension of the image. For instance, when framing the impact of rockets as they hit the Kaiju, he gladly resorts to shaky framing to strengthen the impact of these rockets for the spectator.

Yet despite this straightforward cinematographical approach, the tensive scenes are still tensive and exciting for the spectator. But this excitement and tension is primarily a function of the effective dramatic musical accompaniment. One could even contend that the tension and excitement in Gamera: Guardian of the Universe is solely depending on the atmosphere that the dramatic music infuses in the scenes.

Gamera: Guardian of the Universe is a successful reboot that succeeds in honouring Gamera’s classic past, while also evolving this iconic Kaiju in a meaningful way. While the special effects are bad given today’s standards, the pleasing flow of the narrative, bombarding the spectator with action-sequence after action-sequence, and the effective dramatic musical accompaniment will thrill the spectator and keep him engaged from start to finish.

Gamera – The Showa Era and Gamera – The Heisei Era are released as Blu-ray sets on 25 January 2021 by Arrow Video, with a Limited Edition Steelbook released of The Heisei Trilogy on 22 February 2021.