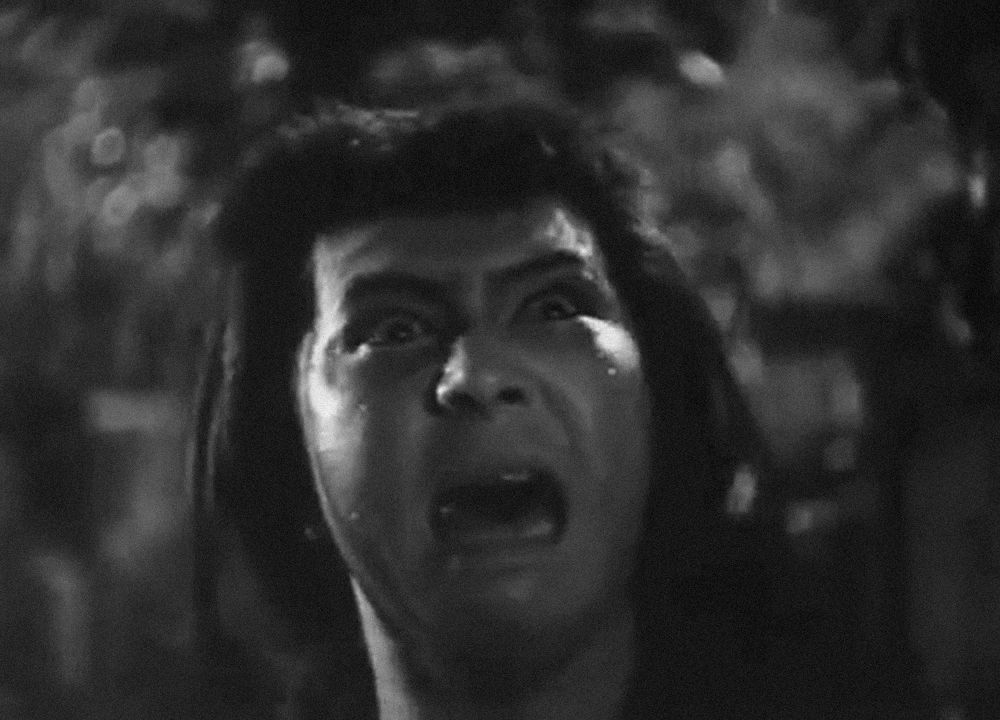 In 1825, playwright Tsuruya Nanboku IV wrote the kabuki drama Yotsuya Kaidan. Today, the play about the ghostly vengeance of Oiwa on her cruel husband has become the most famous ghost story in Japanese history and was adapted for the silver screen countless times during the 20th century.

Especially popular were the adaptations of the film production company Shin Toho. Founded in the late 1940s, Shin Toho employed master directors like Heinosuke Gosho during its heydays, before the production facility had to turn its attention to more populist material due to the fierce competition of the other major film studios.

Foremost, it is Nobuo Nakagawa’s visually flamboyant Ghost Story of Yotsuya (Tokaido Yotsuya Kaidan, 1959), which is hailed today, but, of course, Shin Toho also produced many other versions of the kabuki play. Much less known than Nakagawa’s film, but not to be underestimated, is the screen adaptation of Masaki Mori (1907 – 1962) starring the later acclaimed action icon Tomisaburo Wakayama, who gives an early taste of his skills in the role of the devilish main character of the play, Iemon Tamiya.

The ronin Iemon Tamiya (Tomisaburo Wakayama) is urged by his greedy mother to marry the samurai daughter Ume Ito (Akemi Tsukushi) to be able to escape his miserable existence. But Iemon doesn’t want to cheat on his faithful wife Oiwa (Chieko Soma) and refuses to abandon her. When he kills Oiwa’s disgruntled father in a fight over the latters daughter, he experiences a change of mind. Joined by the insidious Naosuke (Haruo Tanaka) and his mother, he decides to get rid of Oiwa: Using a toxic tincture disguised as facial cream toxic, the schemers plans to disfigure Oiwa’s face to give Iemon a good reason to legally divorce his poor wife. 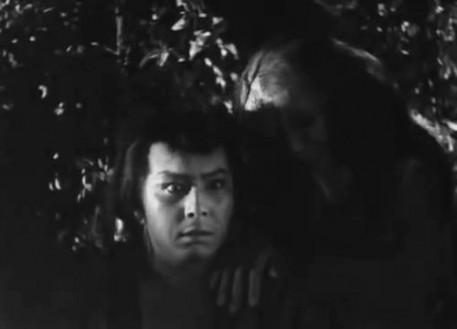 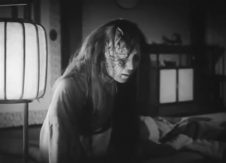 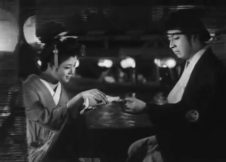 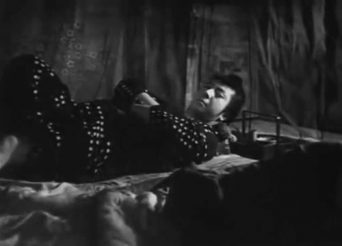 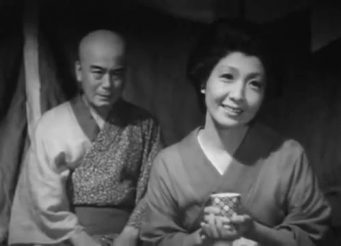 Both visually and contentwise, Ghosts of Yotsuya belongs to the more faithful adaptations of the popular ghost story directed by a rather undistinguished journeyman director, Masaki Mori. Mori had been employed by Shintoho as contract director in the early 1950s and churned out all sorts of sensationalist B crime dramas and ghost films until his death in 1961.

He was certainly no master, but a quite prolific craftsman who dutifully directed every assigned film project without ever cultivating an unique style of direction. Accordingly, Ghosts of Yotsuya is a rather pedestrian adaptation and never quite reaches the heights of the best Yotsuya Kaidan films by filmmakers like Keisuke Kinoshita or Nobuo Nakagawa.

Instead of focusing on blood-curdling shocks, Masaki Mori delivers relatively harmless, yet always decently mounted suspense. The gloomy B/W photography infuses the film with an ominous mood and spirits scenes are more or less capable of chasing shivers down the spine of the more squeamish members of the audience – despite of the rather crude facial makeup of Oiwa.

As in Nobuo Nakagawa’s film adaptation, it is not only the ghost of Oiwa, but also the spirit of the blind masseur Takuetsu, who pursues Oiwa’s treacherous lover. Conveniently, the English translation of the title is written in plural since there is no distinction between singular and plural in the Japanese language. (Thus, “kaidan” can mean both, “ghost” and “ghosts”).

The story itself differs somewhat from the original kabuki play by introducing the character of Iemon’s mother, whose greedy nature leads her son into some evil deeds. Iemon himself is played by Tomisaburo Wakayama, the legendary chambara eiga star, whose iconic portrayal of Itto Ogami in the six original Lone Wolf and Cub (1972 – 1974) films even acquired him a cult following in the West.

In 1956, he was still at the beginning of his career. His Iemon is not intentionally evil, but is gradually seduced into commiting his crimes by his greedy environment. Nonetheless, he becomes a victim of the ghost’s wrath as well, whereby Wakayama effectively portrays the constantly rising panic of his tormented protagonist.

However, apart from Wakayamas tour de force performance, Ghosts of Yotsuya is above all pretty routine. Despite small variations of the play’s structure every important plot point of the source material is employed and the characters remain firmly anchored in the stereotypes of their roles. Conveniently, every viewer of at least one Yotsuya kaidan adaptation should be able to identify Haruo Tanaka’s role at first sight, who plays Naosuke with the character’s trademark cunning and deceptive manierisms.

Ultimately, this has routine approach has also some advantages. Compared to other film versions, Ghosts of Yotsuya may not be worth much talk, but it is exactly this pedestrian approach, which makes the film a great introduction for newcomers to the exciting world of “Yotsuya Kaidan”.

Masaki Mori’s Ghosts of Yotsuya is the first in Pablo’s series on Yotsuya Kaidan adaptations. Join us on the first and third Friday of every month for Pablo’s regular spot.