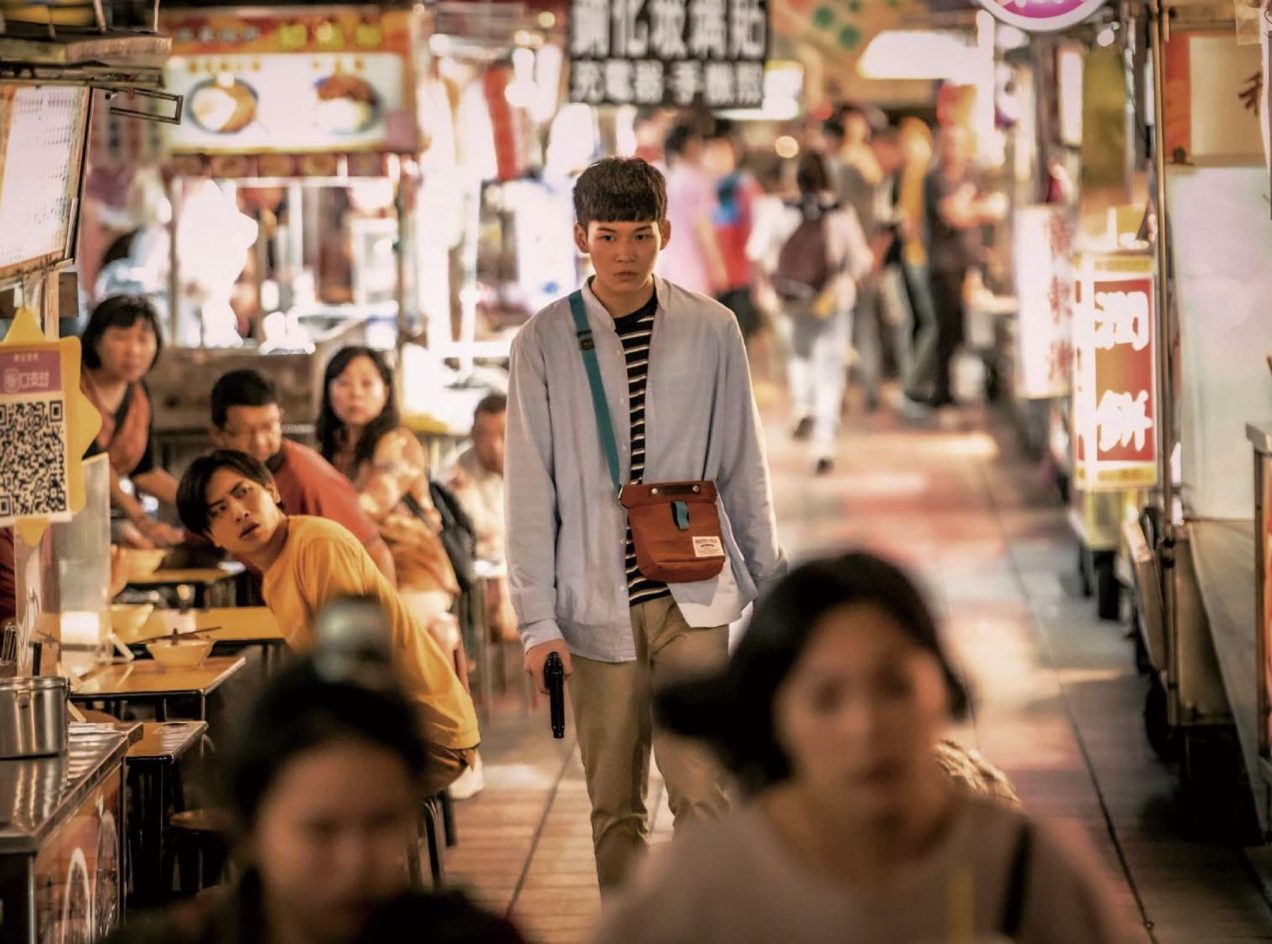 Complex, multi-character crime drama that studies modern Taiwanese society with a “What If?” twist…

The exploration of ‘what if’ type scenarios has long been part of cinematic language, with movies such as Frank Capra’s It’s a Wonderful Life and Peter Howitt’s Sliding Doors being classic examples of the genre. Goddamned Asura is a Taiwanese entry into this canon, and a (god)damn good one at that.

The film opens seemingly showing a young man indiscriminately shooting into a crowd at a busy night market, with footage shot on mobile phones. Then we jump back a few days and meet our cast. Be warned, there are six main characters to keep track of, with connections both deep and slight.

Jan Wen (Joseph Huang) is a disaffected young man, struggling with his relationships with both his divorced parents, and the fact he is being forced to go study abroad. He creates a Webcomic with his friend Xing (Devin Pan), who has a crush on Jan Wen, which he plays out by hooking up with young guys who look like his friend. The Webcomic is based on a popular MMORPG game called King’s World (think World of Warcraft) for which Vita (Huang Pei-jia, Cha Cha for Twins) works for the Marketing Department. Vita is engaged to Sheng (Lai Hao-che), who is a mild-mannered Civil Servant by day, but a popular online streamer by night (unknownst by Vita). A is also in contact with a young girl, Zero (Wang Yu-xuan), who is basically catfishing Sheng for money by making sexual promises. Zero is a poor, rebellious but very smart young lady who has to look after her alcoholic and near deaf mother, whith whom she lives in an apartment complex that is being investigated by local journalist Mold (Mo Tzu-yi).

Events progress, and the film catches up to the opening scene. It turns out that Jan Wen is the gunman, and he unloads his enhanced BB gun into the crowd, which contains both Mold and Sheng, ending up with the latter being killed. Mold brings down Jan Wen, and nearly pummels the young shooter to death. The second act of the film then deals with the fallout of these events. Fundamentally, we see how lives change, either due to loss and grief, or by trying to make sense of what has happened.

Then we get the third act, which posits our ‘What If?’ Scenario, asking what would have happened if a previously unknown link between Jan Wen and Zero had led to an accidental meeting that would lead to a completely different set of results. Goddamned Asura is smart enough not to paint its alternate realities in black and white. Whilst the shooting doesn’t happen in reality B, and some events do not escalate to their formally tragic conclusions, other pathways present themselves that lead to both happiness and in one case, even deeper tragedy.

I won’t lie – the film was hard to keep track of initially, with so many characters to follow, and even the main six not being initially obvious. However it rewards your patience, not only when following the linear plot, but also when events in the alternate timeline add background on our cast. Additionally, despite all the cleverness around dual timelines and the like, the film spends plenty of time looking at important social-economic factors in modern Taiwan, with loneliness, poverty, and the impact of Social Media (and living online) all coming under the microscope.

Director Lou Yi-an not only handles a large cast and an ambitious high concept well, but he also delivers a film that looks and sounds great, without resorting to any unnecessary flashiness. Performances on the whole are great, with Wang Yu-xuan and Devin Pan being standouts among a really solid cast.

Goddamned Asura doesn’t bring a happier ending in either timeline, preferring a ‘different sh*t, same day’ approach, but each character remains true to their personalities in both. It does not feel gimmicky, but rather an interesting experiment in investigating the lives of others. It’s already won plenty of awards and nominations, including being Taiwan’s entry for Best International Feature Film at this years Oscars. If you get a chance? Watch it.