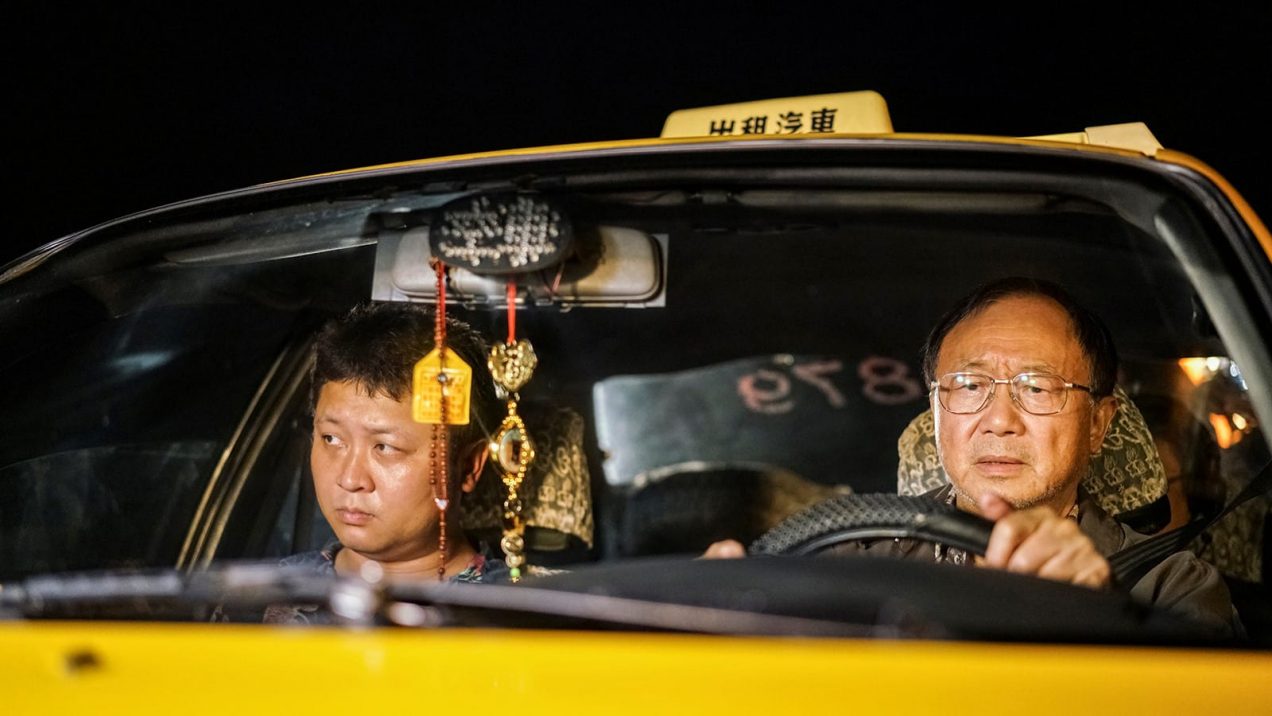 A young drug trafficker and an old taxi driver travel together, getting caught up in murder and gang troubles along the way…

Taiwanese writer director Chung Mong-hong has been quietly building up a reputation as one of the country’s most interesting filmmakers, having won a number of awards at home and abroad since his acclaimed 2008 debut Parking. For his latest offering Godspeed, as with his last film Soul in 2013, which starred martial arts legend Jimmy Wang Yu, Chung has again recruited the services of a much-loved Hong Kong veteran, in this case Michael Hui, arguably the face of Cantonese comedy in the 1970s and 1980s. The film was another critical hit for Chung, garnering a slew of awards and nominations, as well as playing at a long list of festivals around the world.

The plot follows Na Dow (played by Taiwanese comedian Na Dow, who worked with Chung on his earlier films), who ends up working for drug dealer Da Bao (Leon Dai, another Chung regular) as a mule after answering an advert. Tasked with transporting a shipment to the south of Taiwan, he reluctantly agrees to let taxi driver Old Hui (Michael Hui) take him in his beat-up vehicle, and the two end up on a meandering journey, encountering various people on the way. Unbeknownst to the two men, a gang war is brewing, and they soon find themselves caught up in violence and murder, the trip turning into a fight for survival.

Chung Mong-hong is a writer director who straddles the line between the arthouse and the more commercial, and though Godspeed is probably his most accessible film to date, it’s still an unconventional, at times tricky proposition. While ostensibly a road trip movie, it’s random and anecdotal even by the standards of the form, and shifts gears frequently in both narrative and thematic turns, starting off following Da Bao, who initially seems to be the main character until it suddenly switches to Na Dow and Old Hui. Their journey is filled with tangential subplots and run-ins, most of which have little to do with the overall plot, most notably a stop at a funeral where Old Hui pretends to know the deceased in order to scam a free meal, and these do give the film an unfocused feel which will be testing for some viewers. A slow, almost indifferent pace contributes to this, and though the film is certainly engaging, it’s hard to shake the feeling that it’s actually a little overstretched and insubstantial.

Tonally the film is similarly a real mix, veering between gang battles, quiet character drama and off the wall weirdness, making it very difficult to pigeonhole. Chung also works in a surprising amount of brutal violence, including shootings and a shockingly nasty torture scene, which sit alongside a very dry and eccentric line in observational comedy, finding humour in both the banal and stranger aspects of the protagonists’ experiences. This does give the film a very distinct feel, and Chung definitely wins points for taking a generic sounding premise and doing something different with it, though again, this clearly means that it won’t appeal to all tastes.

One thing which can certainly be said is that it’s great to see Michael Hui back on the big screen again, this being his first major role in quite some time. Hui is on great form, even in his seventies still showing the same sly, mischievous charm which made him so popular, though managing to temper this with some more downbeat and emotional moments. The film sets him and Na Dow up very much as opposites, the younger man being sullen and non-communicative for long stretches of the running time. As a result, though it’s hardly the fault of Na Dow and his performance, the relationship and gradual bonding of the two men is undermined, and while there’s something to be said for subtlety, Chung leaves a bit too much unsaid. It’s Leon Dai who actually impresses the most, with a fantastic turn as Da Bao, easily the strongest and perhaps the most interesting character in the film – ironically this is really a bit of a problem for the film, as it picks up momentum and tension whenever he’s on screen, his subplot and development being more gripping than the main narrative and characters.

Though the very definition of a mixed bag, Godspeed does have a lot to recommend it to open-minded viewers and fans of Chung Mong-hong. For those willing to be patient and appreciate its languid, often obscure charms, it should make for an enjoyably idiosyncratic take on the road movie genre, given a definite boost by the presence of Michael Hui and a commanding performance from Leon Dai.

Godspeed is available from YesAsia, and screens as part of the New York Asian Film Festival 2017, which runs from 30 June to 16 July.