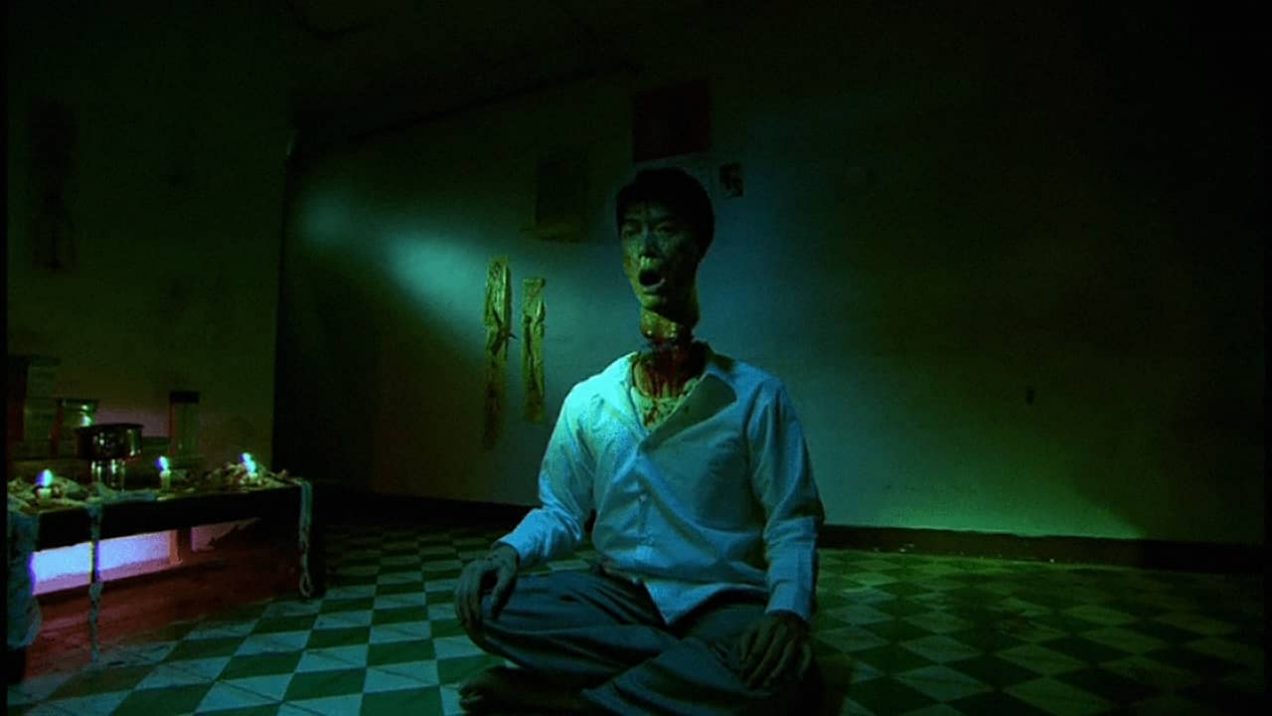 Herman Yau is a name revered by any right-thinking fan of Asian horror and exploitation cinema, having been responsible for all-time immortal classics like The Untold Story, Ebola Syndrome and many more. At the same time, Yau is one of Hong Kong’s most prolific filmmakers, and frequently dabbles in comedy, drama and romance, having found success in pretty much every genre imaginable. 2007 was a key year for admirers of his more full-blooded works, as it saw him returning to Category III horror for the first time in a while with Gong Tau, a gloriously old-school slice of gruesome fun which whipped up a lot of attention at the time due its wild trailer, and which was released internationally as Gong Tau: An Oriental Black Magic and Voodoo in different territories.

The film stars Category III veteran Mark Cheng (also in Raped by an Angel, The Imp, The Peeping Tom and a long list of other classics) as tough Hong Kong cop Rockman, who gets assigned to investigating the particularly nasty ritual murder of two fellow officers. After his wife (Maggie Siu) and son are attacked at home it becomes clear that the killer has a personal reason for targeting Rockman, the prime suspect being Lam (Kenny Wong), a criminal on the loose who apparently can’t feel any pain following a run-in they had years back. Aided by his partner Sum (Lam Suet), Rockman finds the case becoming more and more bizarre, and with his wife falling foul of a mysterious ailment it appears that some kind of black magic curse might be at work, possibly linked to a dark secret from his time in Thailand.

For fans of the old Shaw Brothers sleazy sorcery classics of the 1970s and 80s, and of Herman Yau’s iconic 1990s Category III output, Gong Tau came as a very welcome breath of fetid air, with Hong Kong horror at the time being rather anaemic. While it isn’t quite as unrestrained as Yau’s early shockers, the film packs in a check-list of black magic favourites, from flying severed heads and centipedes through to the misuse of corpse fat and other bodily fluids, all of which makes it wildly entertaining for the right audience – viewers without any knowledge of Gong Tau spells and practices are in for a number of jaw-dropping surprises. Although somewhat undermined at times by substandard CGI work, the film is suitably unpleasant when it needs to be, if perhaps with more of a focus on ickiness and the grotesqueness of the black magic rituals than on traditional blood and gore. There’s certainly more than enough here to earn the film its hallowed Category III rating, and Yau proved that he hadn’t lost his touch when it came to making viewers feel queasy.

While the black magic carnage is the main draw, Gong Tau works well in general as a mix of crime mystery and horror, and though the revelations and Thailand subplot are unlikely to surprise veteran genre fans, Yau throws in plenty of well-timed twists and dark developments. The film does differ from Yau’s other Category III works like The Untold Story and Ebola Syndrome in that it largely eschews their streak of wicked satire, and though it thankfully doesn’t take itself seriously, it has a more grim and nihilistic feel as a result. In part this is down to the fact that none of the characters are particularly likeable, with Cheng’s Rockman clearly being marked as a heel from early on – it’s never easy managing to keep viewers engaged in the fate of an unpalatable protagonist, though Yau balances this by keeping the focus on the film’s central mystery and the question as to which grisly bit of black magic is coming next.

Gong Tau was a fine return to gory form for Yau, and is a great entry-level piece of nastiness for the uninitiated. Although he has since returned to the genre and to Category III on a number of other occasions, it still stands as one of his best works of the last couple of decades and as a fantastically creepy piece of Hong Kong black magic horror.