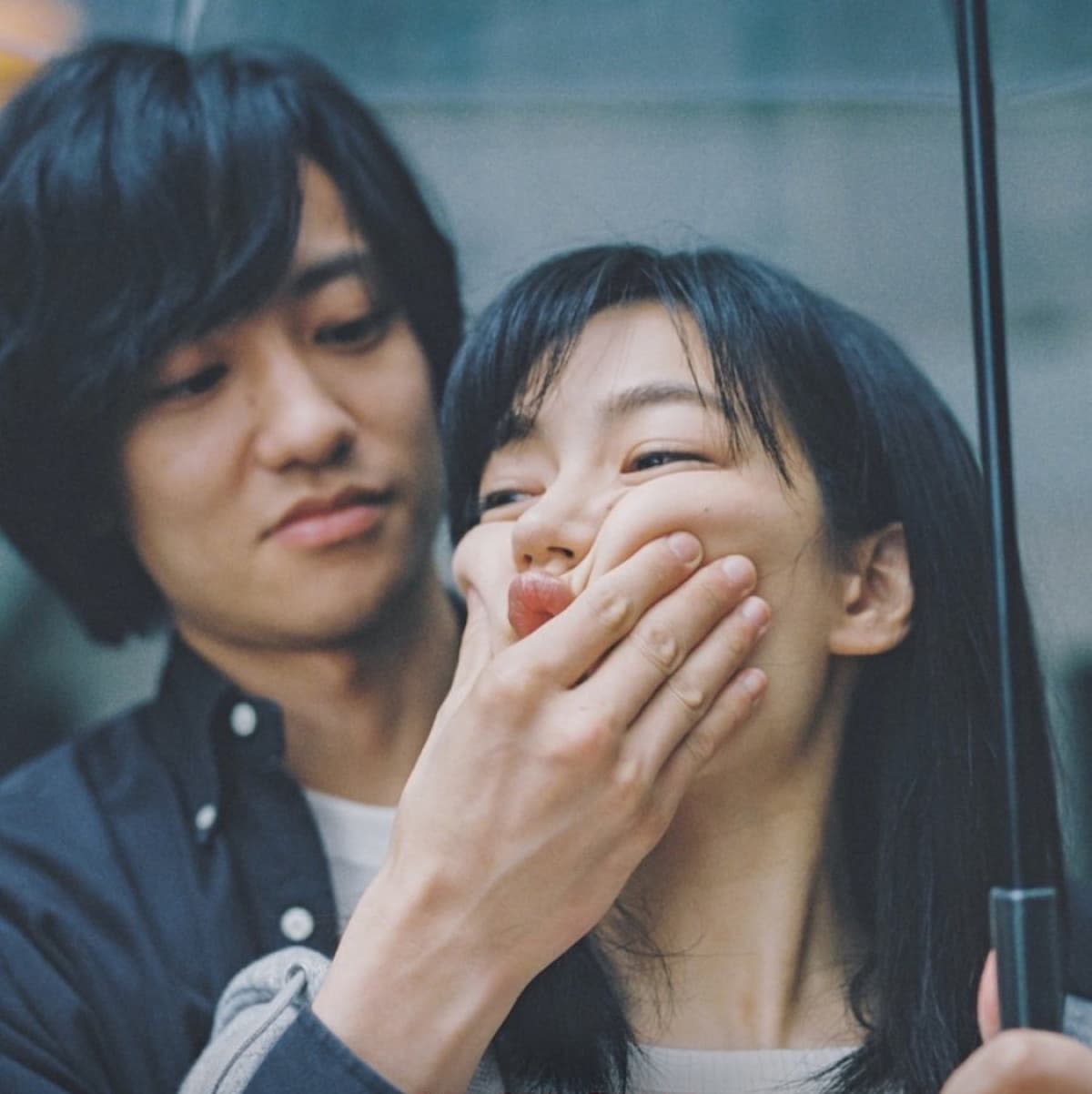 Whose baby? The big question distinctly and grippingly explored through a contemporary Japanese lens…

One of the great ironies of modern Japanese cinema is how the country has arguably the worst demographic problem in overall combined terms of low birthrate and an aged population, yet their film industry is arguably the most unwaveringly and shamelessly youth (and youth sensibility)-targeting of any of the world’s major ones. That paradox is evident in the never-ending waves of manga/anime adaptations, largely high school-set youth dramas and continuing emphasis on idols. (Conversely, for Asia’s other two largest industries, India is just the opposite with the world’s biggest youth population dominated by stars in their 40s, 50s and even 60s; China reaches both poles.) 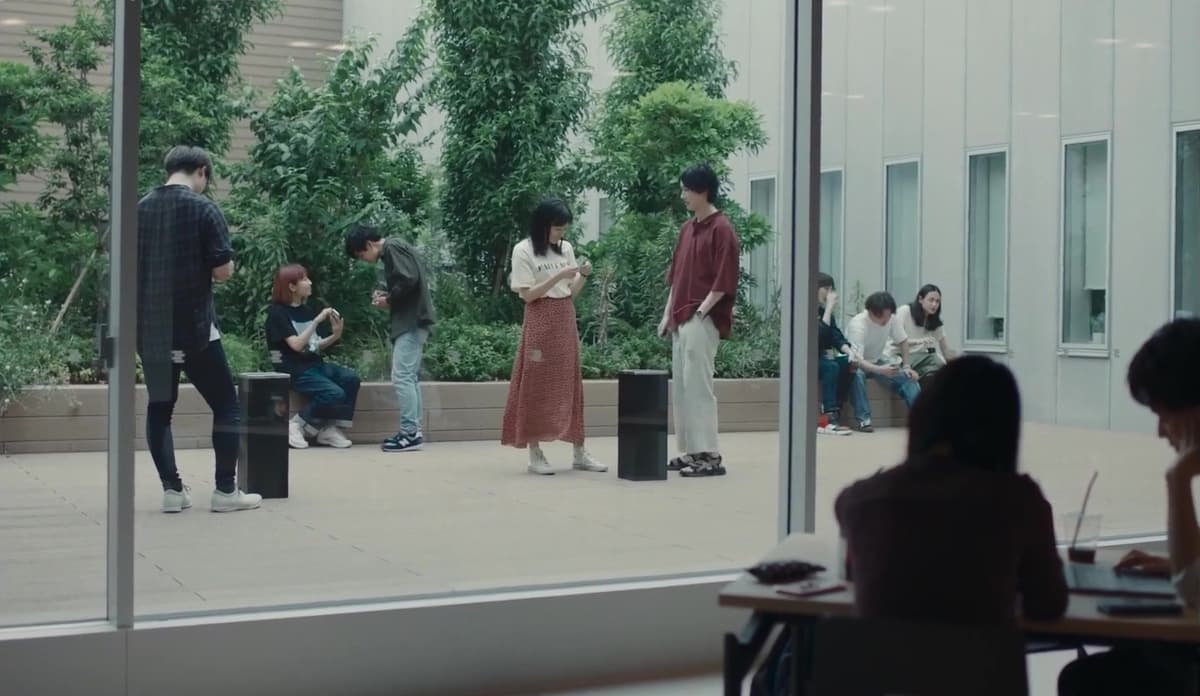 Of course, to further add to the contradictory nature of Japanese cinema’s image as of late, on the international front for world cinema fans it’s disproportionately (though with much of what else is out there, not too unjustifiably) represented by the sensitive slow-burn cinema of directors like Hirokazu Koreeda and Ryūsuke Hamaguchi. But for what was once an incredibly dynamic industry from every angle in the 90s and 00s and often known for having something for everyone (including in the same film), in more recent years there seems to be less and less of middle ground between the mainstream/youth camp and the arthouse/indie camp. That leaves me fully welcoming of rarities straddling the two whether in their subject matter or their sensibility — or in the case of Takuya Kato’s debut film, Grownups, both. 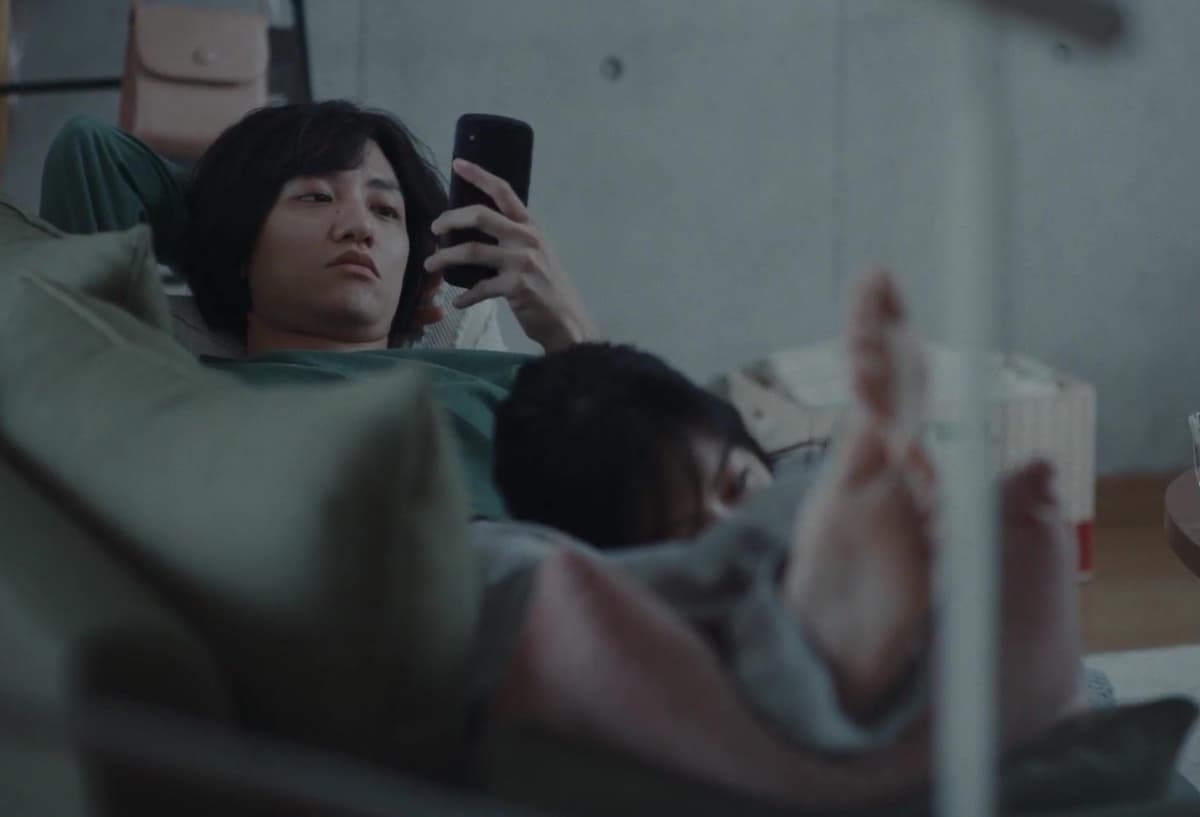 Yumi (Mai Kiryuu) is an art design student in an ambiguous relationship with her boy/friend Naoya (Kisetsu Fujiwara), who’s part of an acting club and a budding playwright aiming for a career in theatre after graduation. Around the same time, she’s being courted by her more “pure”, affluent classmate Masato (Dori Sakurada). When she’s not working, studying or in close company with Naoya, she’s hanging out among her naughty girl clique: Their ringleader (and baddest influence) Usui (Rio Kanno), Eri (Kokoro Morita), and Ikeda (Kururmi Shimizu) seem to have little on their minds beyond endless pursuit of and gossip about guys. Yumi comes off as the relatively timid “good girl” of the pack. 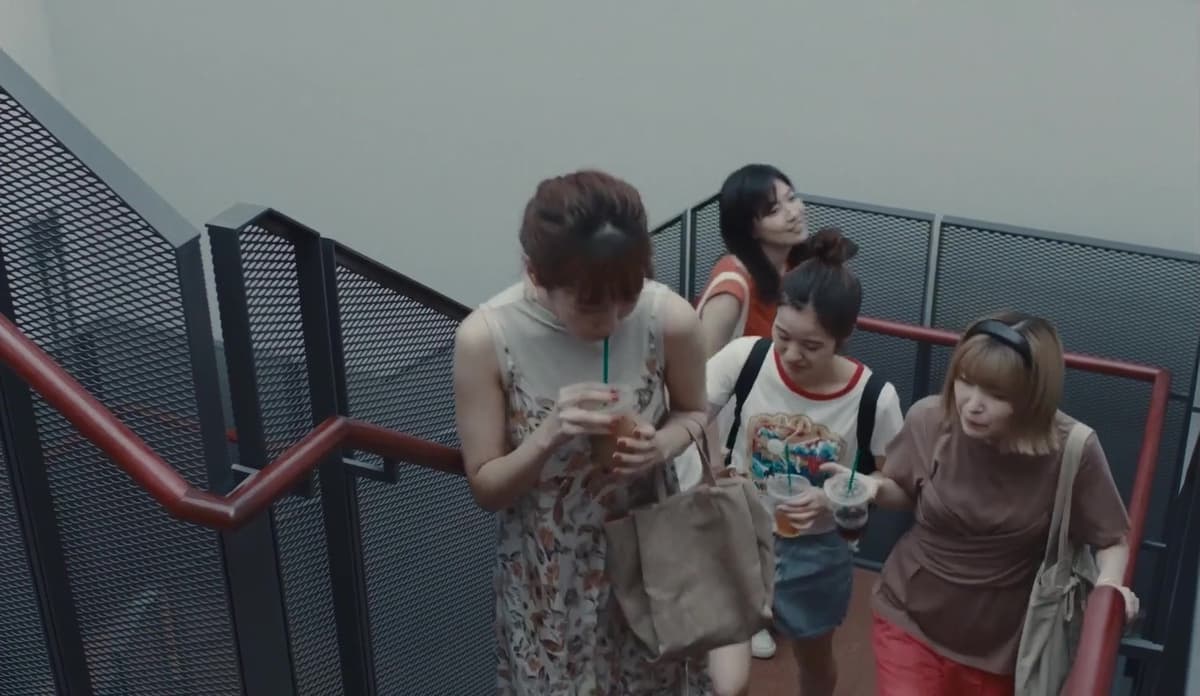 Though Naoya is the one pushing Yumi to take their relationship to a further, clearer level, their outlooks are turned upside down in more ways than one upon the news Yumi is expecting. The much bigger problem is that it turns out it just might be Masato’s instead. That leaves Naoya highly sceptical about the idea of staying with her while keeping the baby…or staying with her while not keeping the baby…or recognising their relationship as broken and going their separate ways — or anything! 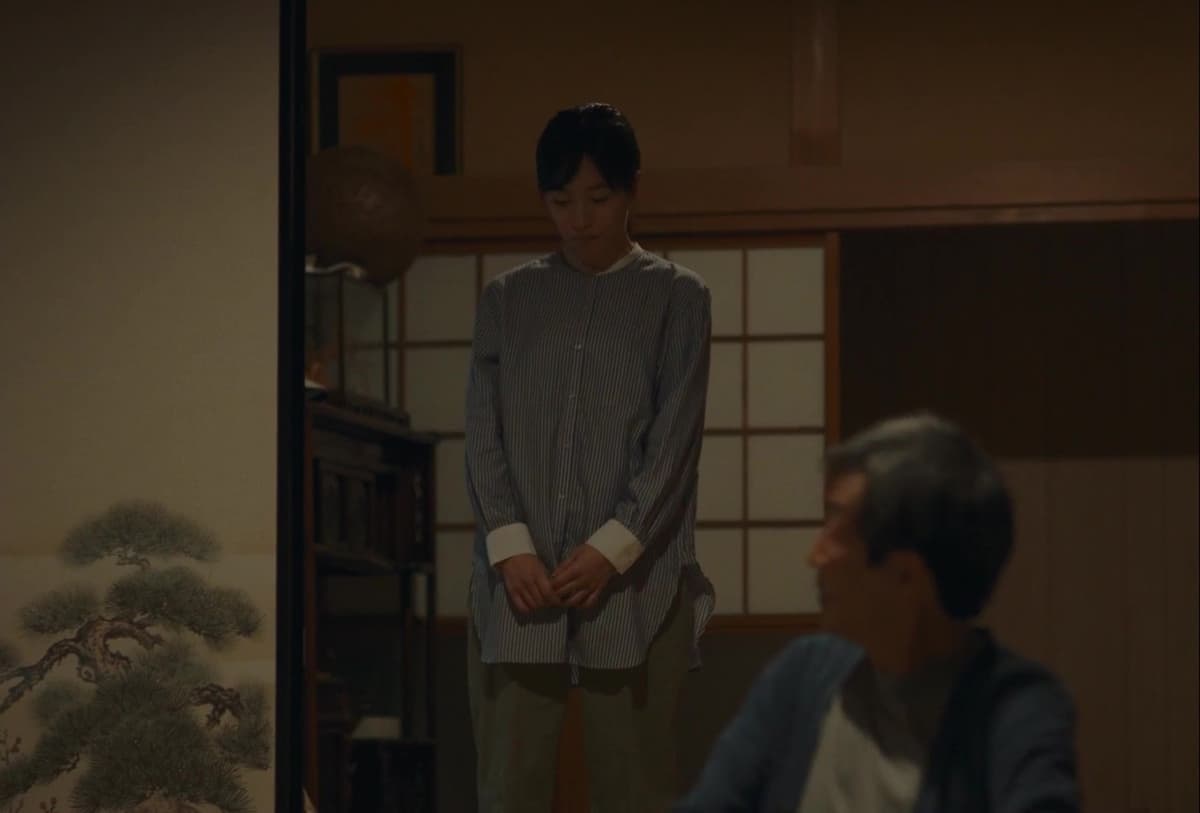 Naoya tries to set conditions to allow for a better grasp of the situation that still begs questions on if they will actually improve things — namely an insistence on meeting the other guy — but Yumi isn’t having it. In fact, if anyone has even less of an idea what they want at this point than Naoya, it’s Yumi, as Naoya is being torn from the clearly known practical implications of his choice/the results, while Yumi will have that much more to reflect on with that much less an ability to escape the outcome. 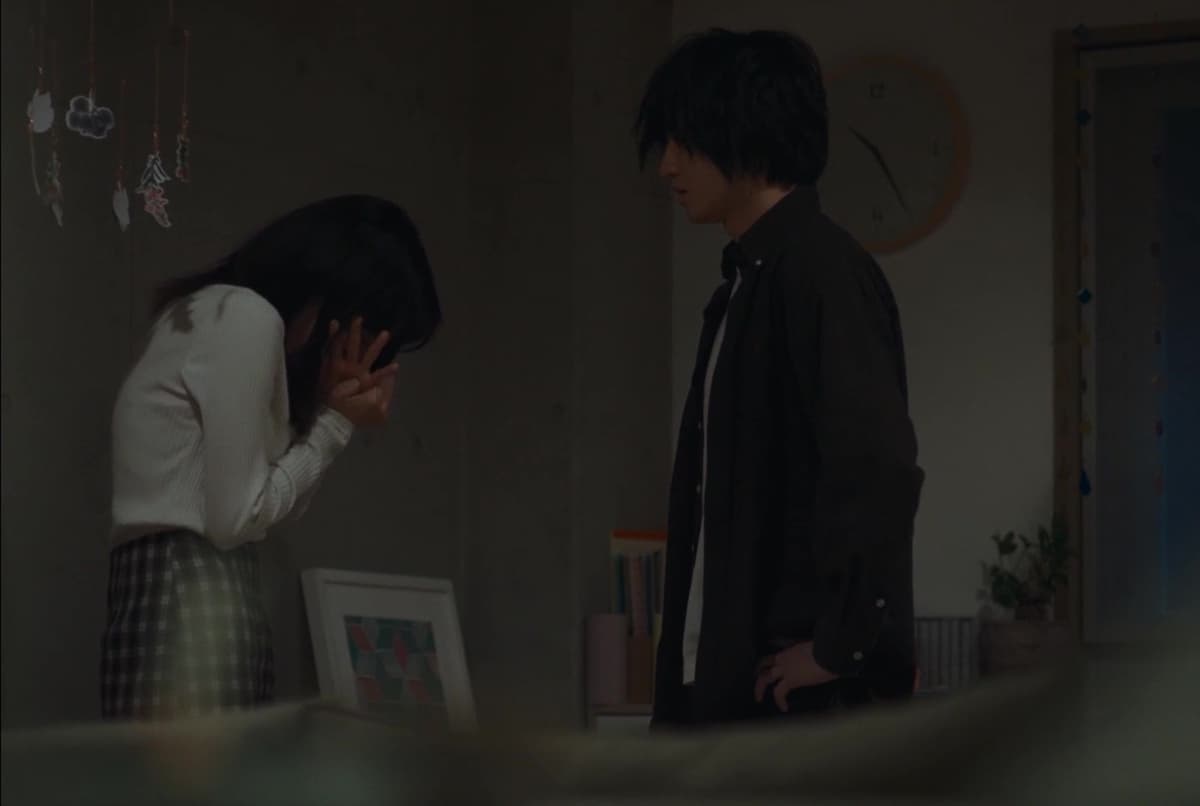 Despite starting off quite young (in his early 20s), Takuya Kato quickly found success as a stage director and TV screenwriter for years before his start in cinema here. And indeed, Grownups has a sense of intimacy (figuratively in this case) borne of the theatre. Both its characters and settings are kept both generally limited and with the full attention of the screenplay and the lens, even when the frequent wide and distant shots highlight their surroundings. 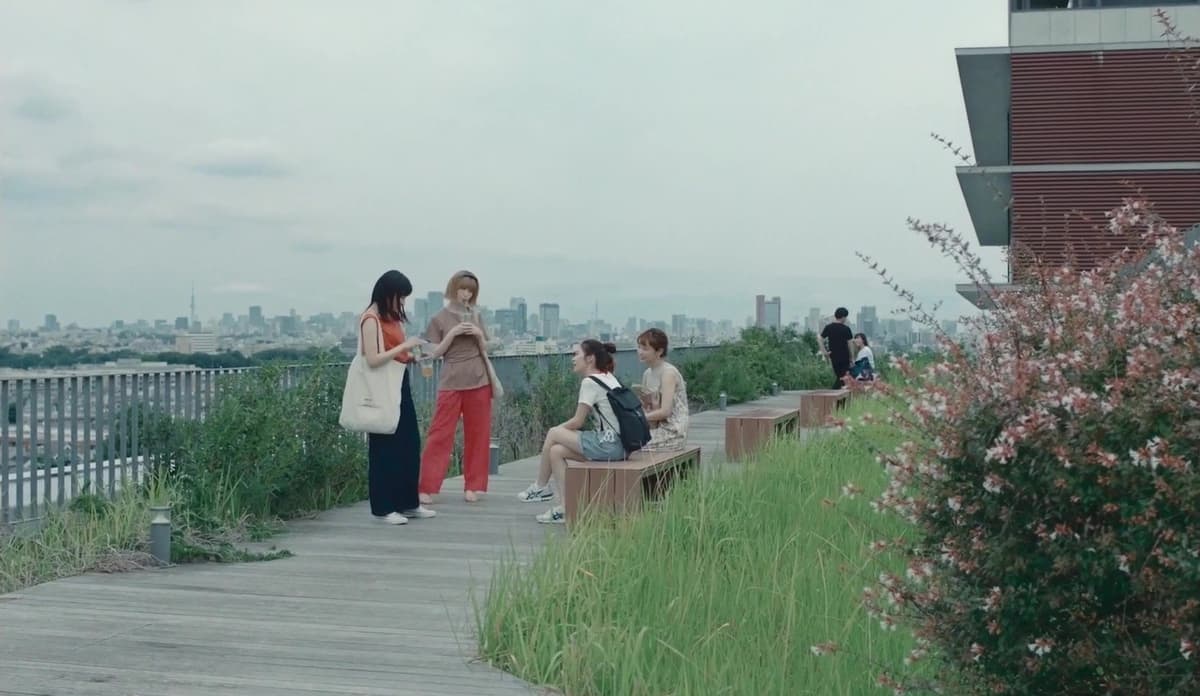 That said, Grownups is also cinematic in its more outward stylings. The occasional serene shots of nature and more modern architecture to establish unraveling human discord are rather Naomi Kawase-esque — but the more distinctly youthful yet also edgy and acerbic nature of the dialogue is a sharp reversal from what we’re used to there. Likewise, the female sort-of bonding and girl talk we hear here definitely wasn’t pulled from a Koreeda script: they’re nonchalantly assertive, speaking and boasting of hitting and running out on unsuspecting men, or even targeting and deflowering them. I could only recall seeing groups of ordinary Japanese women (i.e. not bargirls, prostitutes etc.) like this represented on Roman Porno movies. 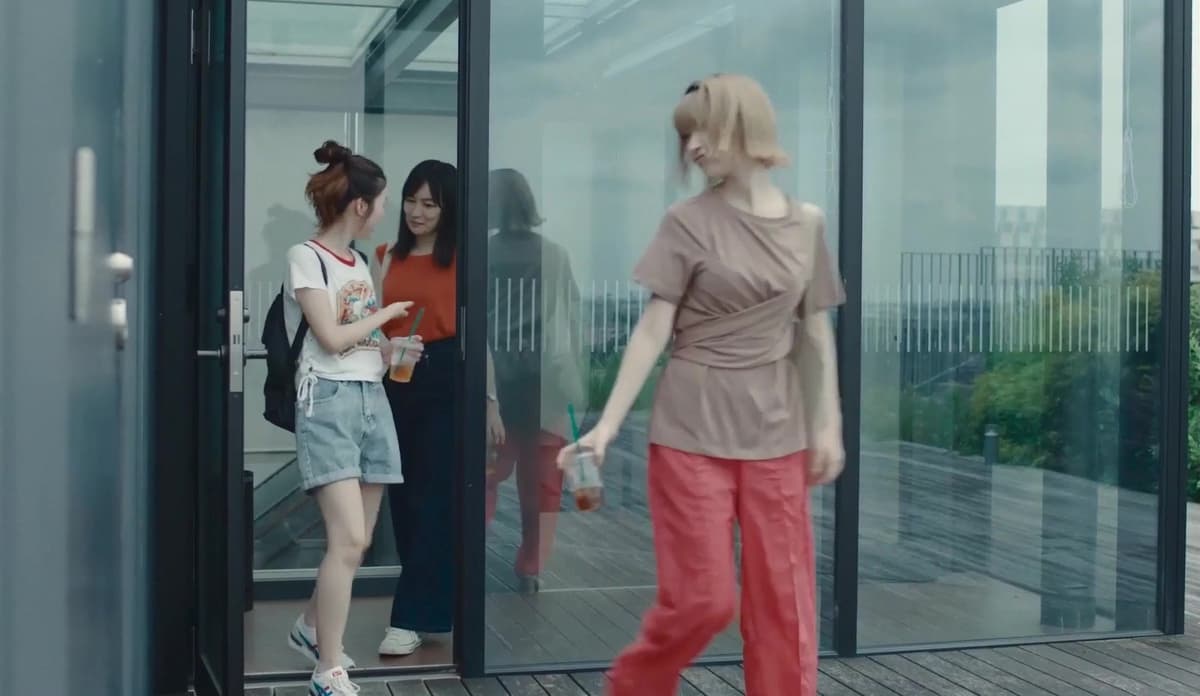 At the same time, however, Grownups isn’t by any means an unbridled or deliberately irreverent celebration of youth licence. The freewheeling insouciance of the sex scenes (all kept either sufficiently distant or limited in angle so as not to be plain “adult” sex scenes) and the very frank discussion that goes with them is most indicative of newly christened grownups who’ve found themselves to be above worrying or thinking much about it. Concurrently, the posh, orderly and affluent settings of their apartments, study/work spaces, and trips (and of the movie’s general look for that) — pretty much everywhere they go and stay — mask the reality of who they still depend on to finance it. 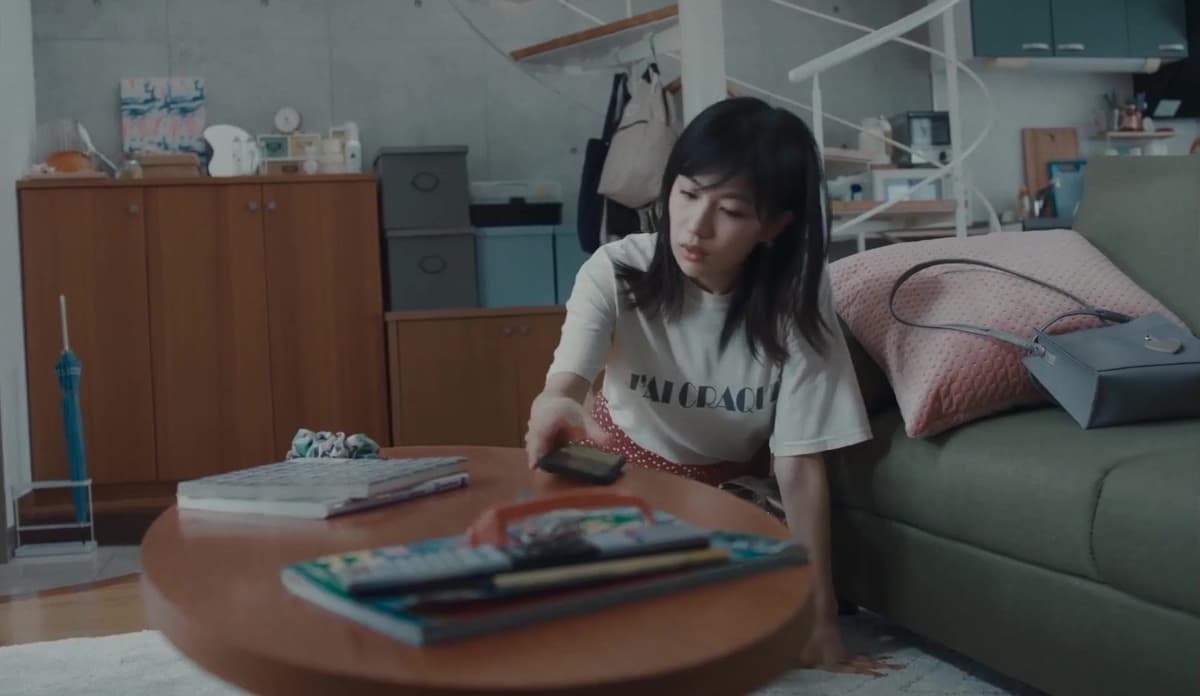 The emphatic but also not entirely confident insistence more clearly felt from the original Japanese title weighs upon the leads throughout the whole film, as they struggle to live up to the eponymous proclamation. It’s not that any involved party was planning to have a baby, or really even necessarily to have any kind of relationship. But one thing leads to another and….actually, we’re also frequently taken back to things that happened in between that one and another mentioned earlier; and also occasionally pushed forward into the fallout from things we haven’t actually seen in full yet. The non-linear structure of the narrative is not designed as an artistic statement, a slick stylistic device or a method to puzzle us as many movies of different stripes are inclined to using that form for. Instead, it’s above all slyly constructed in a way so as to continuously change our perception and expectations of the lead characters — especially Yumi. 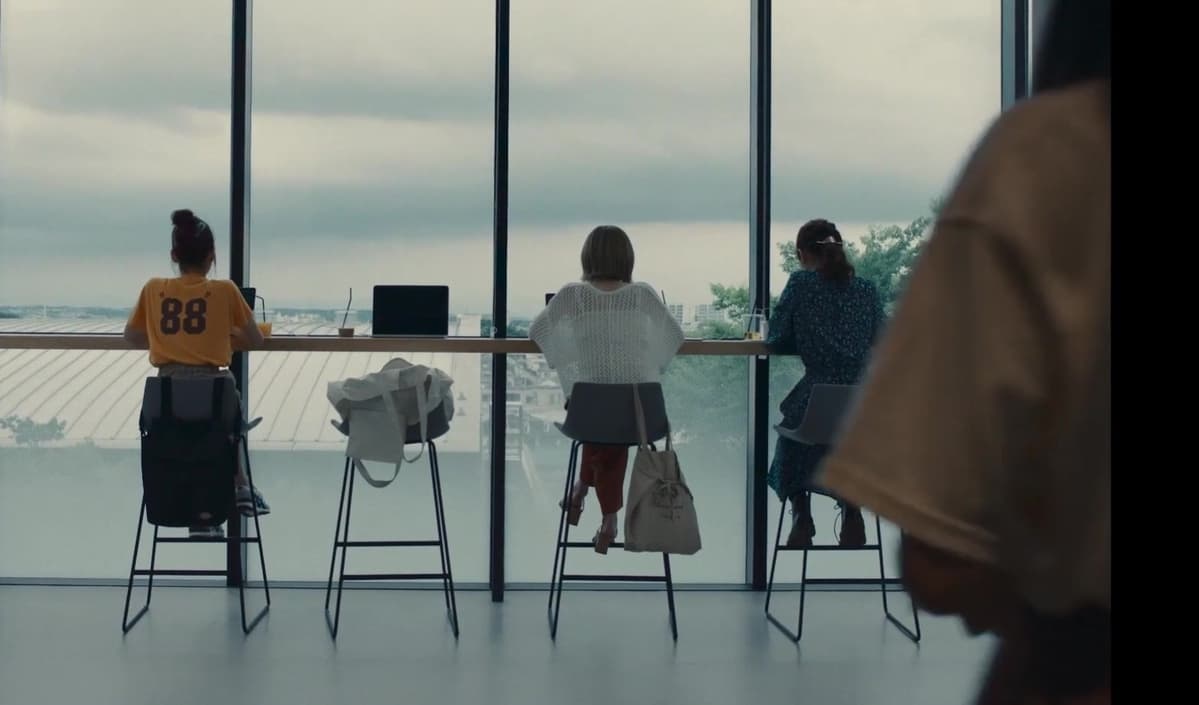 The tension is even more palpable when the leads are voicing concern for each others’ wellbeing and personal wishes than when they’re actually pushing each other away or threatening to run/hide from the situation. It’s in fact innate Japanese etiquette — the one thing that can’t be shaken off by people determined to freely set their own paths and not play by the rules in any other ways — that dictates their negotiation and defence mechanisms. Playing equally large part to at least superficially calm the situation (with the risk of backfiring to exacerbation) are the stillest ma spaces in tandem with the most radiantly anguished Japanese Smiles. 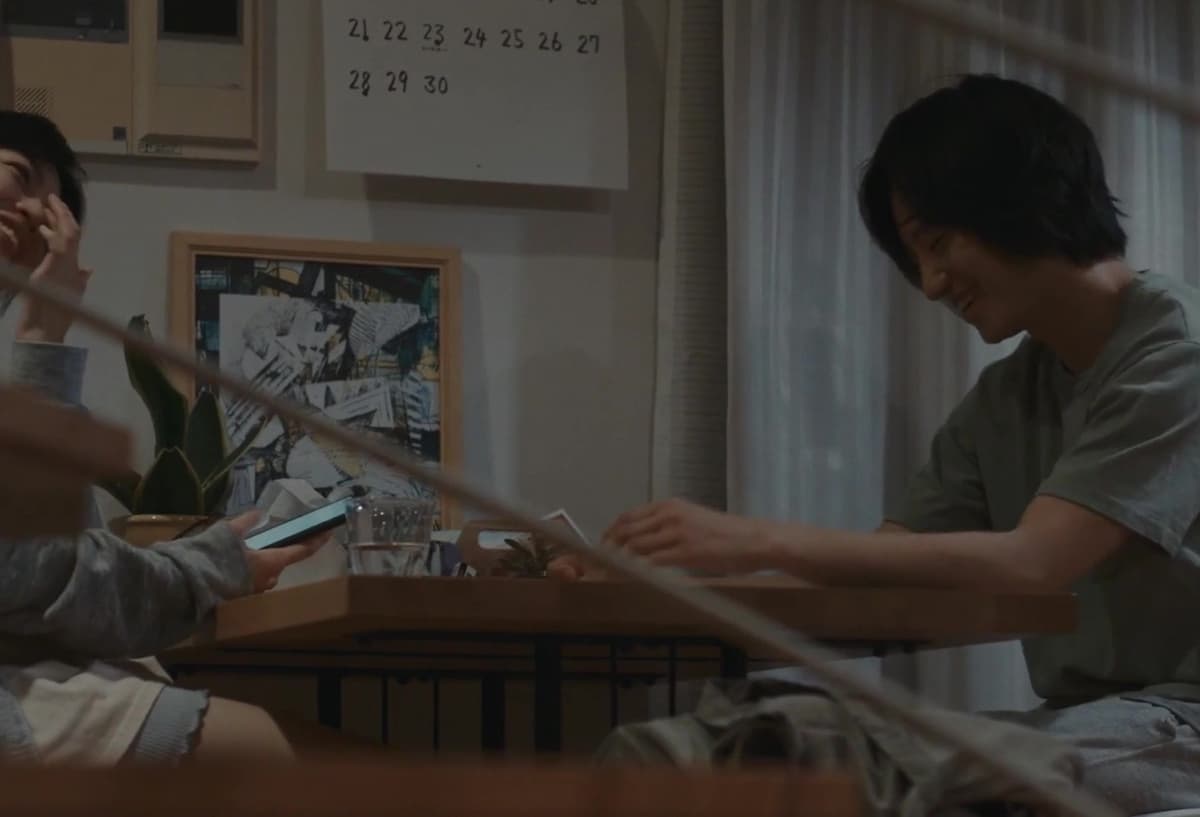 The paradoxically restrained moments of spiteful tension in fact represent the best and freshest scenes in the film. The most stirring discussion that’s on the threshold of determining the couple’s future together (if they’re really the couple, though also if they can get past the question of whether they need to be the biologically official couple) even finds gratitude being weaponised. Simple corrections and courtesies are carefully sharpened and aimed so as to cut deeper than any petty insults, epithets or expletives could. Adding to the contradictorily calm bite of Grownups is an ending that’s striking in its mundanity; in a way returning full circle to the exact same spot from early on — until realising that everything’s changed within its enervating stagnancy. 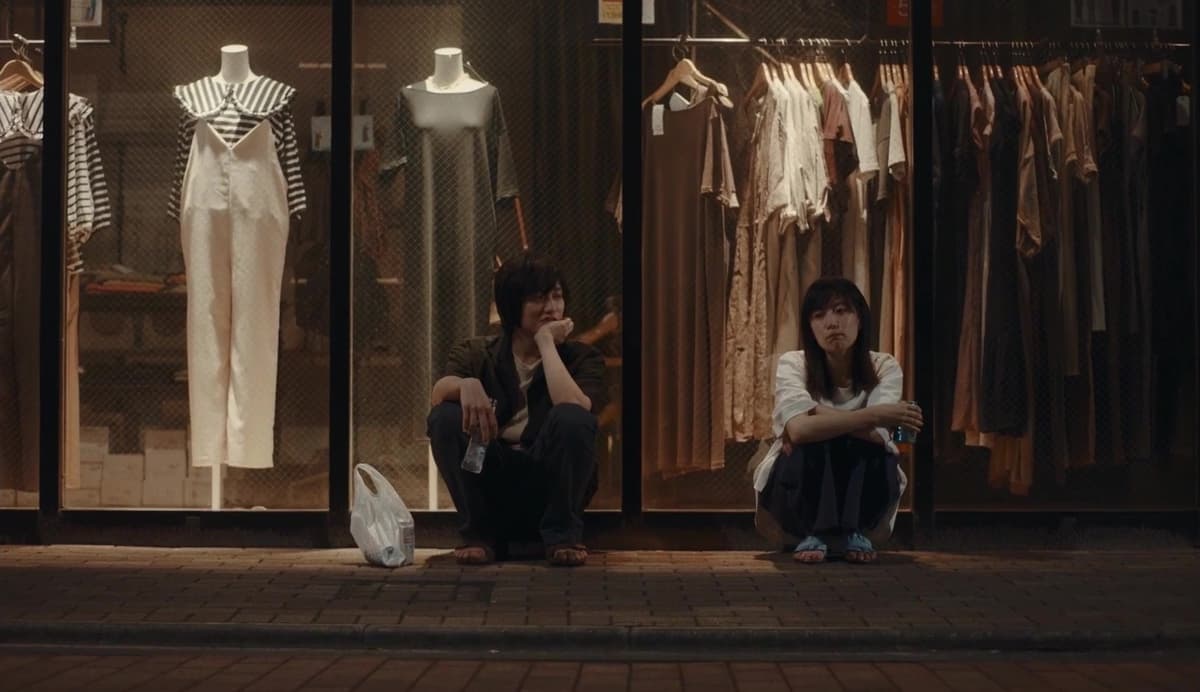 Grownups introduces a welcome new voice in Japanese cinema, fittingly using characters on the cusp of an initially exciting yet increasingly hazy new stage in life to embody a film bestriding youthful and mature.

“I borrowed! We still have partners!” 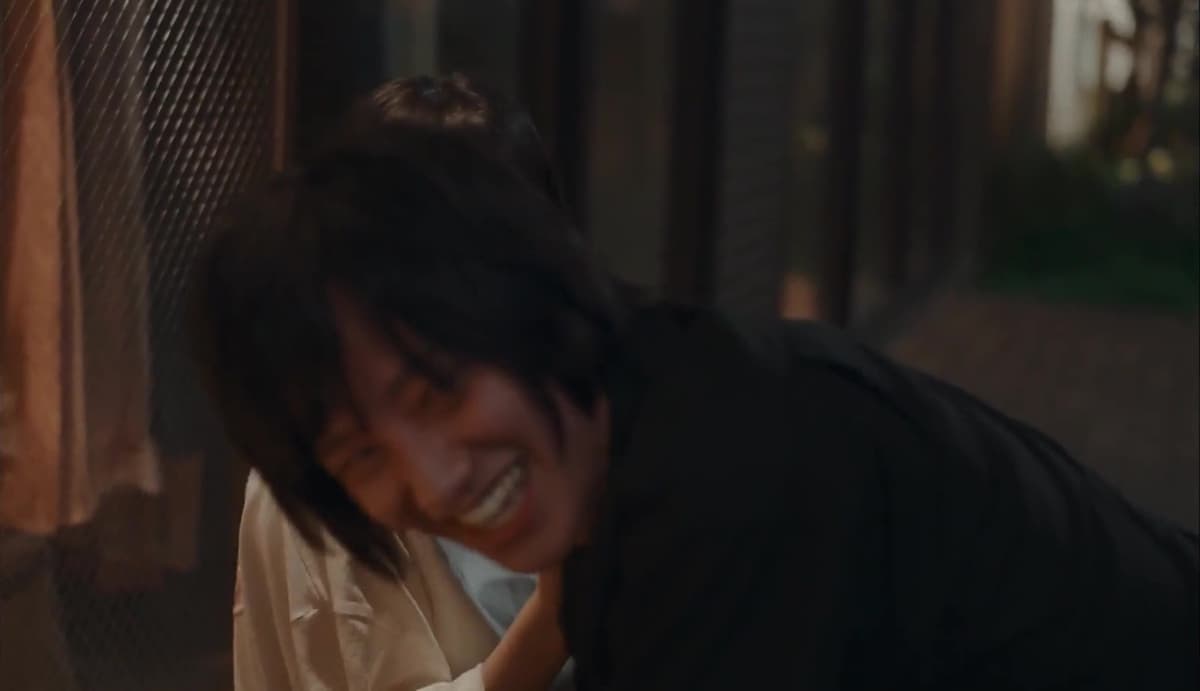 Even when noting both Japan’s massive Western influence and Japan’s massive influence on the West since, the Japanese Smile remains just as powerfully expressive and nuanced — and to those not in the know, just as bewildering — as it was over a century ago.