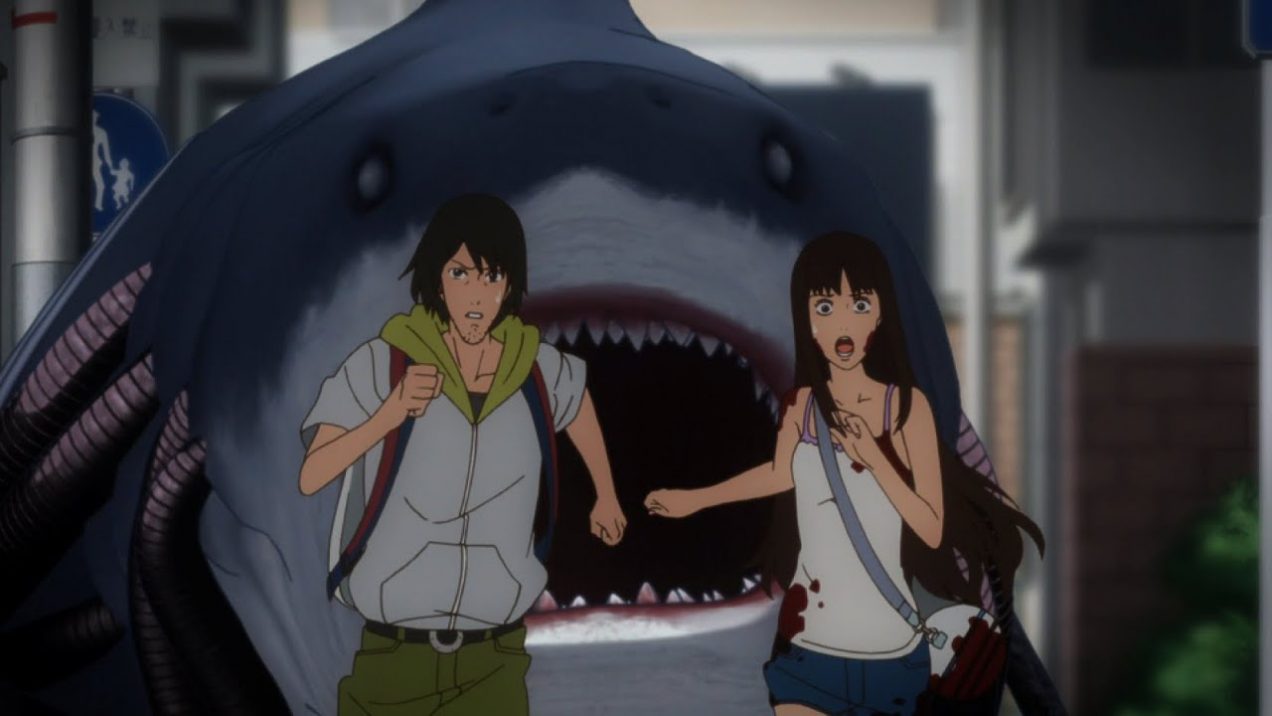 This is a horror movie. You know because there’s people with terrified faces, the main character is a Plain Girl that’s in over her head, she’s got two friends, one’s a Bookworm and one’s a Slut (sorry, technical term here, haven’t you seen Cabin in the Woods?), there’s a Journalist in search of the Truth, and a Mad Scientist. There is also millions of fishes of every size, coming out of the sea and walking all over Japan on mechanical legs, but really, you’d label this “horror” even without seeing any of the beasts.

Yes, it’s quite trope-heavy. It’s also rather undecided on what it wants to be. At the beginning, you may think it’s a near-parody of the genre. Then it continues in a more standard tone; the first serious attack happens while the Slut is having fun with two random guys, there’s a contagion, panic in the streets. It then nods to hentai, with near-tentacle-porn at least twice. You may even think there’s some sort of social commentary, seeing as most of the people are shown carrying on with their lives even in the midst of the invasion: at the airport and at the train station, everyone is checking their watches and the departure boards, while the monstrous fishes are just a few metres away. Or maybe it’s an old-style horror: the fishes are the result of a military experiment, says the Mad Scientist. Or it’s really an allegory: the infected people are not totally mindless! Oh, it’s mystic: the gas that fills the monsters has a personality! No, it was aliens!

And then it ends. Seriously. No resolution, no insight, not even “and so humans went extinct”. Just… the end.

I’m clearly not a lover of horrors, so I may be doing some injustice to this title, but I really couldn’t get into it. Not just because the premise is quite absurd, that’s sort of par for the course, but also because of quite a few internal inconsistencies: none of the “explanations” given by the characters has much bearing to what they’re seeing, for example; or, why only people turn green, and not the fishes or other animals? It just feels like a set of random ideas thrown together without much sense. Even the animation is not particularly good, with the CG parts jarring against the mostly flat shading of the drawn parts.

Lovers of horror movies, or staunch proponents of the “so bad it’s good” school, may find this interesting and even rewarding. Me, I’m off to watch something else.

The disc includes a few extras:

– A *text-only* interview with ITO Junji (伊藤 潤二), author of the manga this film is an adaptation of

– Trailers for other movies

Note of caution: the subtitles in my review copy had several mistypes. Not nearly enough to make them hard to read, but irritating nonetheless.