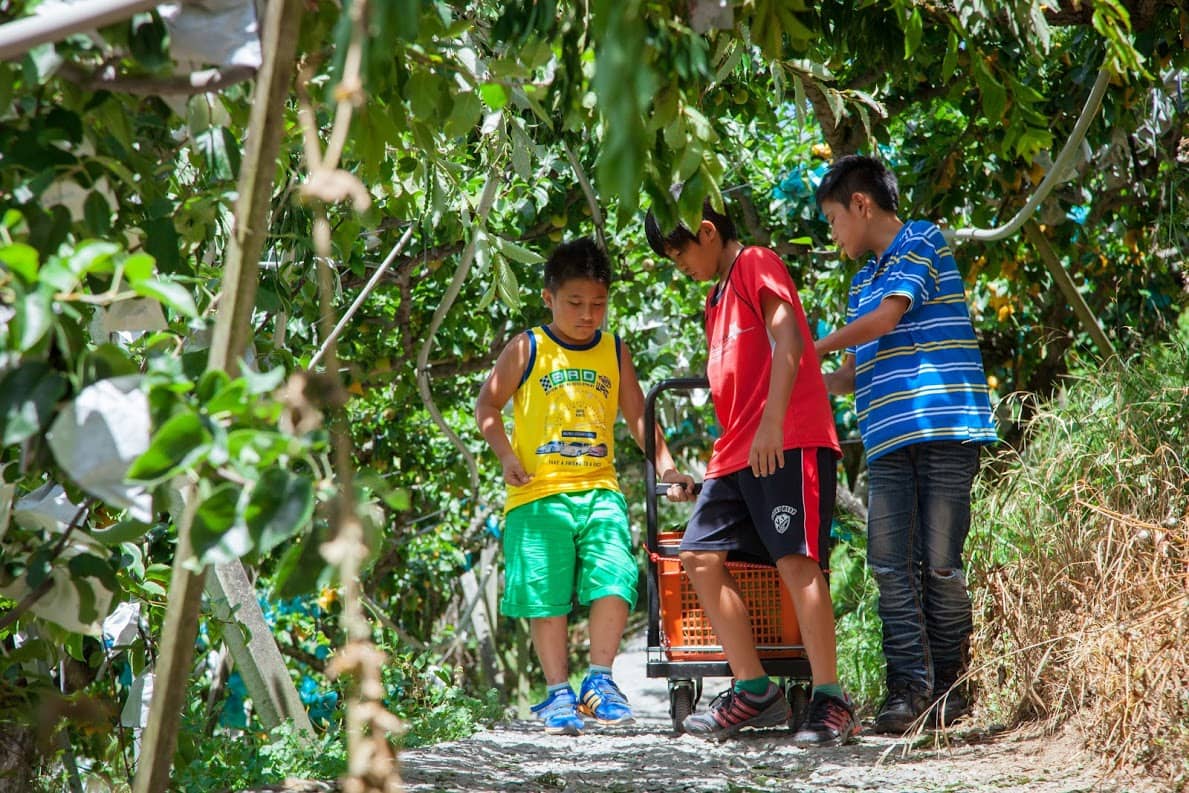 Hang in There, Kids! follows 3 young boys from the indigenous Taiwanese Sqoyaw tribe as they go about their daily business, with their lust for life and winning smiles hiding a number of darker stories. The naughty but charismatic Wadan (Buya Watan) is delighted about the return of his High School dropout brother and has a crush on his disabled after-school teacher La-wa (Esther Huang, formally of Taiwanese Girl Group Hey Girl). Lin Shan (Suyan Pito) struggles with the presence of his alcoholic musician father (Mudi). The quietest of the trio, Chen-hao (Watan Silan), is raised by his older single father, but pines for his long-absent mother. The children interact amongst themselves and others, all against the gorgeous backdrop of the mountain that looms large over their village.

The standout of this film is the performances of the young children, with director Laha Mebow getting wonderful performances from her young amateurs. They are all naughty and cheeky, but each manages to carry the scars of their situation and their pasts in a realistic and non-forced way. There isn’t really a bad performance in the whole piece, but this film lives and dies on that of the young cast, and it succeeds wonderfully.

Laha Mebow herself is of aboriginal origin, which explains the great care she brings to displaying the world of her story. She has cast adult actors such as Huang and Sharon Kao (Lucy) who are of aboriginal heritage. This is a world that is more rustic and rural than that of more familiar urban Taiwanese we might see in film, and their skins might be a little darker – but this isn’t a hidden tribe cut off from modern civilisation. The boys adore NBA Star Jeremy Lin, they compare Lin Shan’s father’s band to Taiwanese megastars Mayday. To be honest they are thriving in the environment. However, this isn’t necessarily the heartwarming story that the film has been marketed as. The brightest and the best move away, frustrations lead to alcoholism, criminal enterprises desire the land to provide fertile growing areas for marijuana, and the demands of conservation have an impact of the local’s way of life. The outside world creeps in on life in the tribe, and provides an avenue for escape – but the balance is hard to maintain.

Nothing encapsulates this struggle more than the character of La-wa. We don’t find out her story until the final act, but she’s clearly providing an important resource to the village with her after-school club, encouraging children such as Wadan that might fall between the cracks. Her disability doesn’t seem to define her, not do the other villagers make much of a deal about it. But as her story is revealed (nationally, via an act of genuine pride and love), we see that she is one of those who had the chance to escape this life, and had it cruelly taken away. It’s a moment of genuine affecting melodrama in the film, heightened because of its late reveal.

If the film has a problem, it is because the narrative has no real crisis, and nothing really changes. There are hints of Chen-hao’s father getting too old to do his job, the reveal of what Wadan’s brother was up to and his eventual incarceration, but the reality is, very little actually changes outside of the individual moments. Even the graduation that is spoken about and would normally provide a bookend to such a film and suggest a brighter future is left un-filmed. I guess that’s because what real life is like.

Hang In There, Kids! screened as part of CinemAsia On Tour 2018.