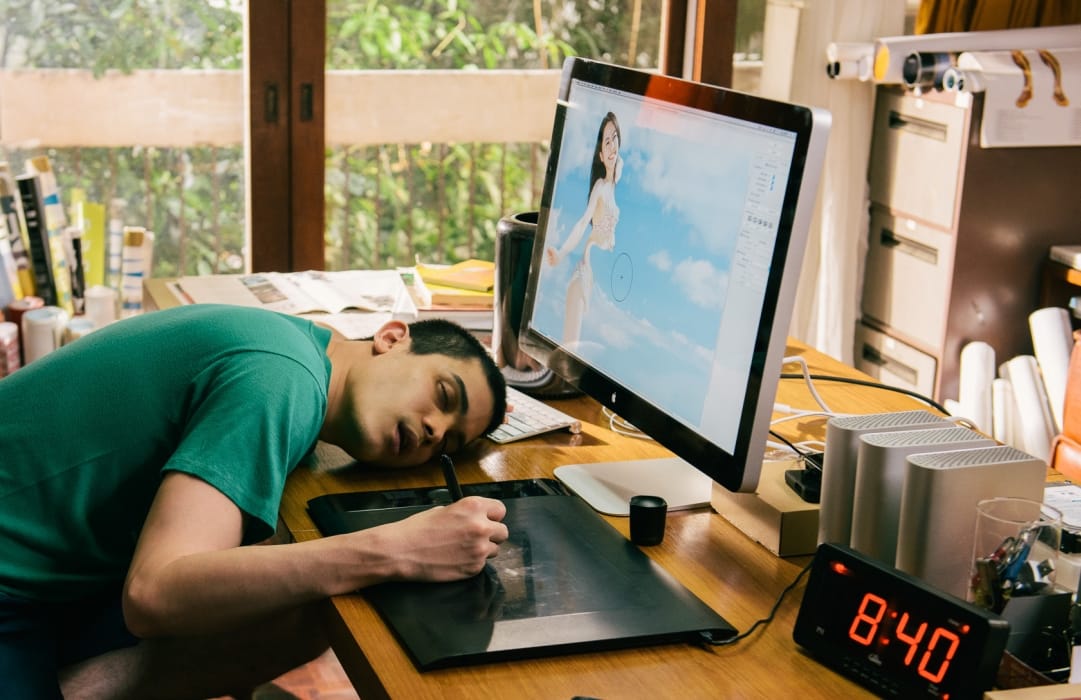 Heart Attack is the 2015 release from the director of films such as 36 and Mary is Happy, Mary is Happy, Nawapol Thamrongrattanarit. Brought to audiences by the Thai studios GTH, most well known for their repetitive yearly rom-com releases, instead Heart Attack offers a different approach to the romantic genre, and a different approach to traditional GTH film releases.

Following hardworking freelancer Yoon (Sunny Suwanmethanont) who is a graphic designer and retoucher in Thailand, he works alongside junior producer Je (Violette Wautier) being ever driven to deliver work quicker and more polished before deadlines. After discovering that his body is rejecting this ‘work overload’, through a breakout of a rash and ever-expansive spots across his body, Yoon heads to the public hospital for a quick fix and to return to his busy freelance job. All well and good, but unfortunately he didn’t factor Doctor Imm (Davika Hoorne) into the equation, who’s medical demands (perfectly reasonable ones) for the welfare of Yoon push his desire for overwork to breaking point.

Yoon has a total of 3 friends. His previously mentioned junior producer Je, who is as bland and uninteresting as characters come, with unemotional performances seeming to be the main drive for her acting. There is the 7-Eleven store attendant Kai, from who Yoon gets his favourite food of fried shrimp (also banned by Doctor Imm, and an act of rebellion against this mandate only serves in Yoon ironically getting more ill), and there is also Yoon’s old friend he hasn’t seen for several years and we briefly meet at the start of the film, during an amusing scene involving a monk temple, a funeral, and a search for wifi.

The film is by and large told from Yoon’s perspective, with a majority of the narrative told through voiceover and exposition from his train of thought. One of the best plot devices in the film is evidently borrowed from recent Western hits Birdman and Whiplash; where moments of utter silence are suddenly pierced by abrupt action and Yoon leaps into the fray across scenes, darting around at a frantic narrative pace that disrupts the previous plodding melancholic dull tone that is consistent throughout the film. This is all great, but the fact is that these frantic moments of tension are few and far between throughout the film. The narrative drags for the absolute longest amounts of time, and is briefly broken up by some rapid drumbeats and hectic editing, but no amount of jigging along of the plot and script once every half an hour can disguise just how boring and slow the rest of the film is.

Nawapol Thamrongrattanarit’s latest film Heart Attack is one with moments of whimsy, interspersed amongst a vast ocean of slow scenic lulls and relatively mediocre filmmaking. The issue is that the narrative is cyclical, in the sense that Yoon never goes anywhere, and the audience and protagonist learn nothing (asides the fact he’s just plain lazy). You can walk away from Heart Attack feeling thoroughly satisfied at knowing you would still get the same feeling from not watching the film at all.  I’m unsure whether my frustration is towards the lack of plot, the lack of pacing, or indeed the lack of an attempt to care about making a half decent film. The romance element is little, most of the side characters (such as Violette Wautier) act very little, there is little to take from the plot of the film, and actually there is little point in watching it at all.

At least the best we can take from the film is that this GTH release isn’t the same as every other, a zany predictable yearly rom-com with little narrative structure deviation, and instead is an interesting expansion away from the cookie cutter GTH releases into unknown filmmaking territory. It’s a shame that with the splitting up and ending of GTH’s boyband era, we won’t get to see more attempts at ‘different’ filmmaking from collective Thai directors. Then again, it’s a small price to pay for the thankful loss of yearly repetitive Thai rom-coms.