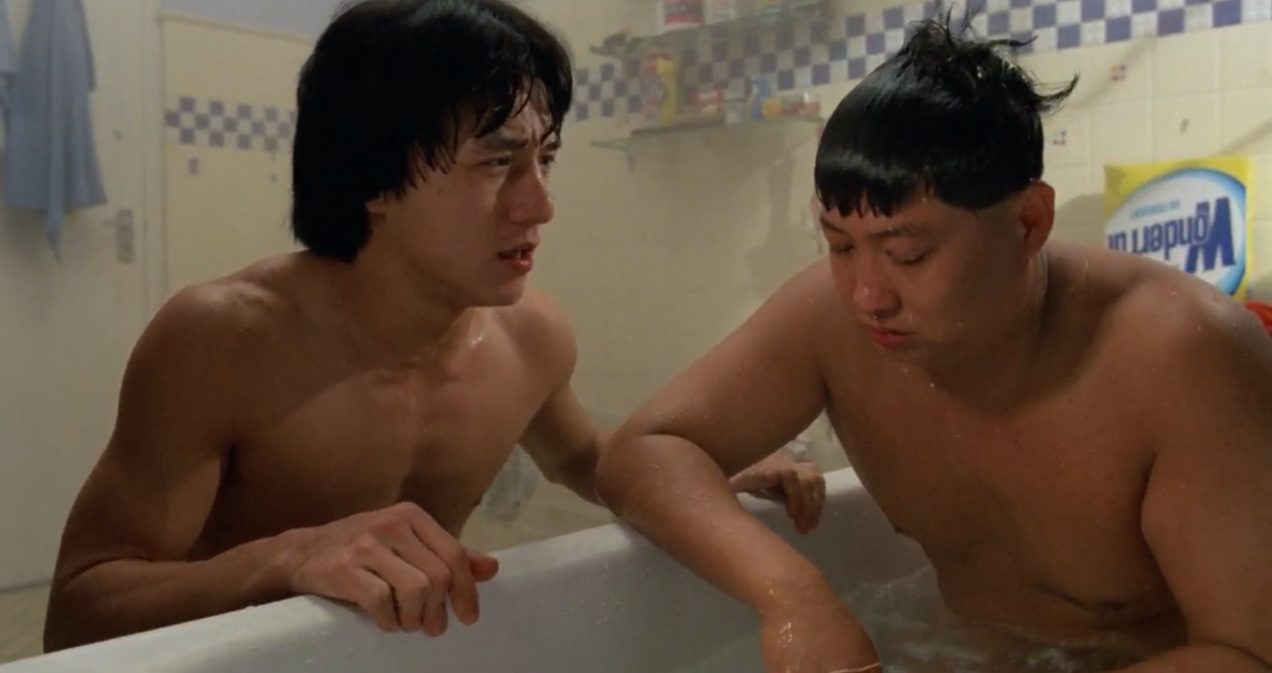 By 1985, few names in Hong Kong cinema were as legendary as Jackie Chan and Sammo Hung. A collaboration between the creators of classics like Police Story, Drunken Master, and Encounters of the Spooky Kind had already proved a recipe for success with titles like Project A (1983) and Wheels on Meals (1984). Trying something new, the team turned away from their action and comedy roots and took a stab at drama with 1985’s Heart of Dragon. The result is baffling.

Heart of Dragon opens with a jungle firefight between Tat (Jackie Chan) and a group of Hong Kong SWAT officers (Jackie’s bright yellow jumpsuit in this scene evens makes it to the poster). After a few minutes of beating down SWAT, Jackie is revealed to be – surprise – a cop in a training exercise. His skills so impress his commander (Lam Ching-Ying) that he is immediately promoted out of the unit and into the Criminal Investigation Department. Thus ends his SWAT career and most of the movie’s action until the finale.

This opening seems deliberately designed to rope in audiences expecting a Jackie Chan action flick à la Police Story. What follows is the introduction of our second protagonist, Sammo Hung’s “Big Dummy,” with his bowl cut, oversized overalls, and a group of friends who all look to be in elementary school. See, the questionably named Big Dummy is developmentally disabled (or, as the characters put it, “mentally retarded”). Despite being over 30 years old, Dummy has the intellectual development of a kindergartner. He spends his days getting involved innocent pranks with the kids that look after him, usually by posing as their father to get them out of trouble or into places they don’t belong. After one of these capers goes wrong, Dummy is locked in a restaurant’s freezer and can only be saved by his little brother, Tat.

Tat and Dummy live together so that Tat can look after his older brother. When he suddenly decides to abandon his new job for a chance to become a sailor (just one of the thousand plot threads that must be kept straight), it becomes clear that Tat does not wish to look after Dummy for the rest of his life. This simmering frustration boils over when Tat unleashes all of the pent-up anger at his helpless brother, beating the ever-loving hell out of him. It is truly bizarre to watch Jackie Chan use his iconic fighting skills to smack down a mentally disabled person, and even stranger when that victim is played by Sammo Hung.

Hung can’t seem to figure out what he wants to do with Dummy. In some scenes, like the one just mentioned, Dummy’s situation is played for sympathy. But, there are plenty of others where the beatdowns and mockery he receives are played for laughs. It doesn’t help that Hung plays up Dummy’s disability in a way that’s not far off from Rosie O’Donnell’s performance in Riding the Bus with My Sister (or even, regrettably, Ben Stiller’s Simple Jack in Tropic Thunder). Hung’s direction muddies the waters even further, as it’s not always clear how we’re meant to react. Are we supposed to laugh uncomfortably or feel bad for Dummy when he is thrown down the side of a hill in a slow-motion shot that goes on for minutes?

Dummy soon gets embroiled in a local gang when he finds a sack of stolen jewellery and is kidnapped. Tat recruits his old cop buddies for an off-the-books rescue operation. Throw this plot thread in the mix with the Tat and Dummy melodrama, the slapstick scenes, Tat’s brief stint as a sailor, the SWAT team, and an abandoned subplot involving Tat’s girlfriend and her new job. Add in a few sappy, on-the-nose musical montages and the result is a hodgepodge of genres that is all over the map tonally. Capping off the whole experience is an advertisement for Guy Laroche watches that pops onscreen just before the end credits.

There are moments of sanity in Heart of Dragon. Chan gives a heartfelt performance that is surprisingly complex. His buddy-cop friendship with Yan (Mang Hoi) is one of the highlights here. On a technical level, there is nothing at fault with the production. Hung directs fight scenes as well as you would expect and even throws in a solid car chase down the alleys and staircases of Hong Kong. There is also a wink to Raiders of the Lost Ark in the finale that’s fun to spot.

Heart of Dragon seems to be trying to inject some serious drama into the trademark Hong Kong blend of slapstick comedy and off-the-wall action of the 80s and 90s, but it doesn’t get the formula quite right. It may be worth a watch for diehard Jackie Chan or Sammo Hung fans, or to wonder at such an ill-conceived idea. If you’re looking for a straight-up action romp or even a down-to-earth depiction of developmental disabilities, there are options out there that are more consistent, tactful, or, well… watchable.

Heart of Dragon is available now on Blu-Ray in a new 2K remaster from 88 Films, which includes the Japanese Extended Cut of the film.

88 Films have included both the Original Hong Kong Cut of the film and the Japanese Extended Cut in crisp new 2K remasters of the original 35mm negatives. The Extended Cut is six minutes longer and includes two short fight scenes and a post-credit behind the scenes segment. The fight scenes are inconsequential to the story and seem to have been included simply as an excuse to give international audiences some much-needed Jackie Chan action. Both take place in the first half of the runtime and the more memorable of the two involves Jackie pummelling the staff of a methadone clinic. Other disc features an English dub, a Japanese soundtrack, trailers, and interviews with Sammo Hung, Jackie Chan, Rocky Lai, and cinematographer Arthur Wong.