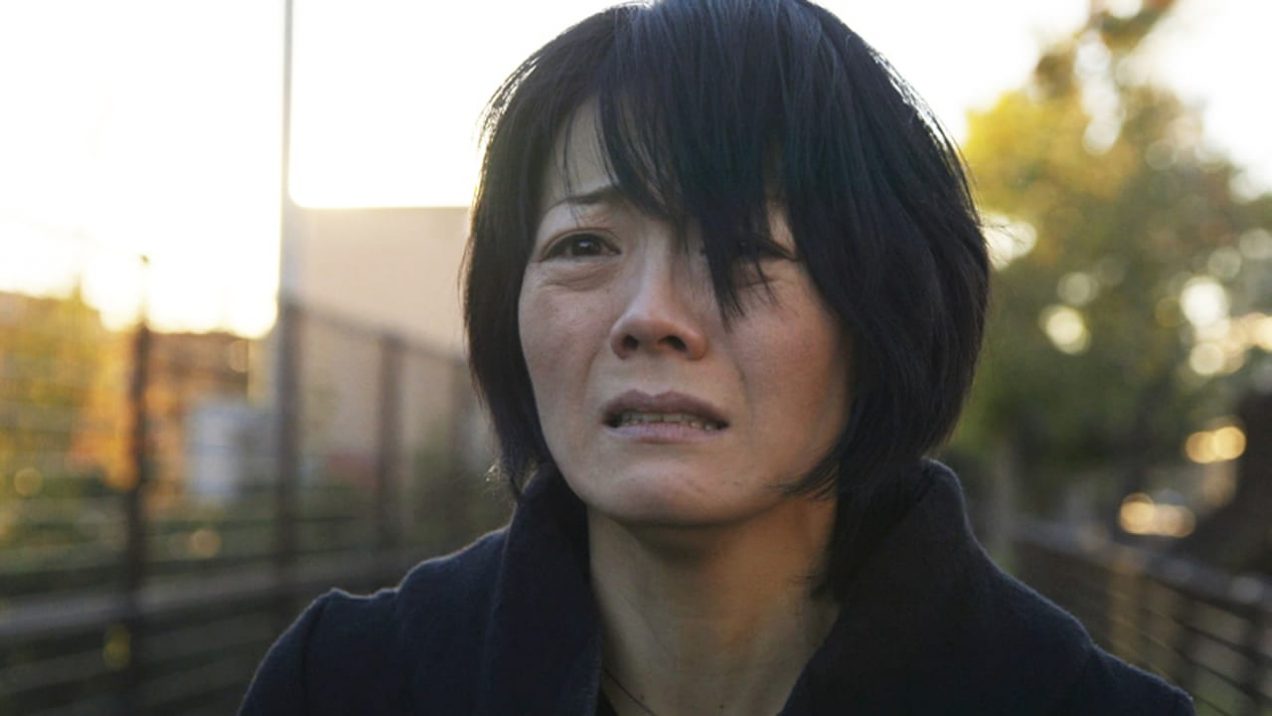 Harumi is a typical businesswoman, living with her husband, after their only daughter, Michiyo, got married and moved out, two years ago. Tragedy, however, knocks her door one day when her daughter is visiting, telling her that she is unsatisfied with her marriage. This tragedy has the form of her son-in-law, Koji, who enters the house in an obviously upset state of mind, asking Harumi where Michiyo is. Harumi is perplexed by his attitude, but informs him that she is upstairs, only to hear some screaming a few seconds later, and then watch Koji come down the stairs with a bloody knife in his hands, an instrument he uses to injure her in the hand, before he leaves.

The story then makes a leap forward to six years after the incident, when Michiyo is dead, Harumi separated, and Koji in prison waiting on a death sentence. Her husband calls her one day to say that he does not want to hate Koji anymore, since he has found solace in religion, while the murderer’s lawyer and mother try to persuade her that he has changed, and that she should talk to him. A reluctant Harumi eventually decides to visit him in prison and after a number of sessions, and intense inner struggle, she decides to try to revoke Koji’s sentence, but both her brother and her husband seem to be intensely against it. At the same time, her brother tries to persuade her to leave her house to his family.

Sato Yoshinori (Bad Child) presents a film that, basically, deals with three issues: Crime and punishment, the way Japanese perceive justice, and what happens to those left behind. Koji’s lawyer, in a scene where she talks to Harumi, eloquently presents the second issue: “It’s unfortunate but in this country, support for the victim is weak. The focus of cases often shifts to the defendants and it becomes ‘society vs. criminal’. The opinions of the affected are lost among the chaos”.

The third aspect, which is the basic one, is portrayed through the parents, although the focus is definitely on Harumi. Yoshinori presents her in a way that highlights the fact that the ones that suffer the most, after an incident like that, are the ones that stay behind, because they have to cope with the loss, and to find a way to continue with their lives. Harumi and her husband deal with the incident in different ways, as he continuously lies to himself, claiming that he is over it, while she tries to confront it in the most straightforward way possible, by talking and trying to understand Koji’s reasons for the crime. The reversal of her opinion, from someone that wants to see him dead to one who desperately tries to revoke his sentence is impressive, and along with the scene where her husband finally breaks down, are the most impressive sequences in the film. This turnaround also highlights Yoshinori’s take on the crime and punishment theme, and particularly the death sentence.

In essence, the film revolves around the two aforementioned scenes, which, along with the initial one, the confrontation of the two mothers and the one where Harumi, her husband and her brother are fighting, are the most impressive ones, as they manage to retain a sense of shock for the whole of the film’s duration. Evidently, Yoshinori tries to deal with too many subjects, but in the end, his ideas are conveyed, for the most part, despite the fact that they are not all thoroughly examined.

Ryo Nishimura is magnificent in the role of Harumi, as she presents a character that initially seems just sad and fragile, but eventually reveals another side, full of rage and determination. This transformation is the highlight of an impeccable performance.

In terms of visuals, the film has some issues, as Kitamura Tomomitsu’s handheld camerawork is quite shaky, and the indoor locations seem a bit dull, after a fashion. However, this is obviously a result of the film’s miniscule budget, and in the end, the indoor filming works quite well in retaining a dramatic essence. Sato Yoshinori’s editing is quite good, as it sustains the relatively fast pace (for a Japanese indie that is) of the film.

Her Mother is a meaningful and entertaining film, that manages to surpass its financial limitations through Ryo Nishimura’s performance and Sato Yoshinori’s elaborate direction.

Her Mother screens at the Vesoul International Film Festival of Asian cinema, running from 7 to 14 February.