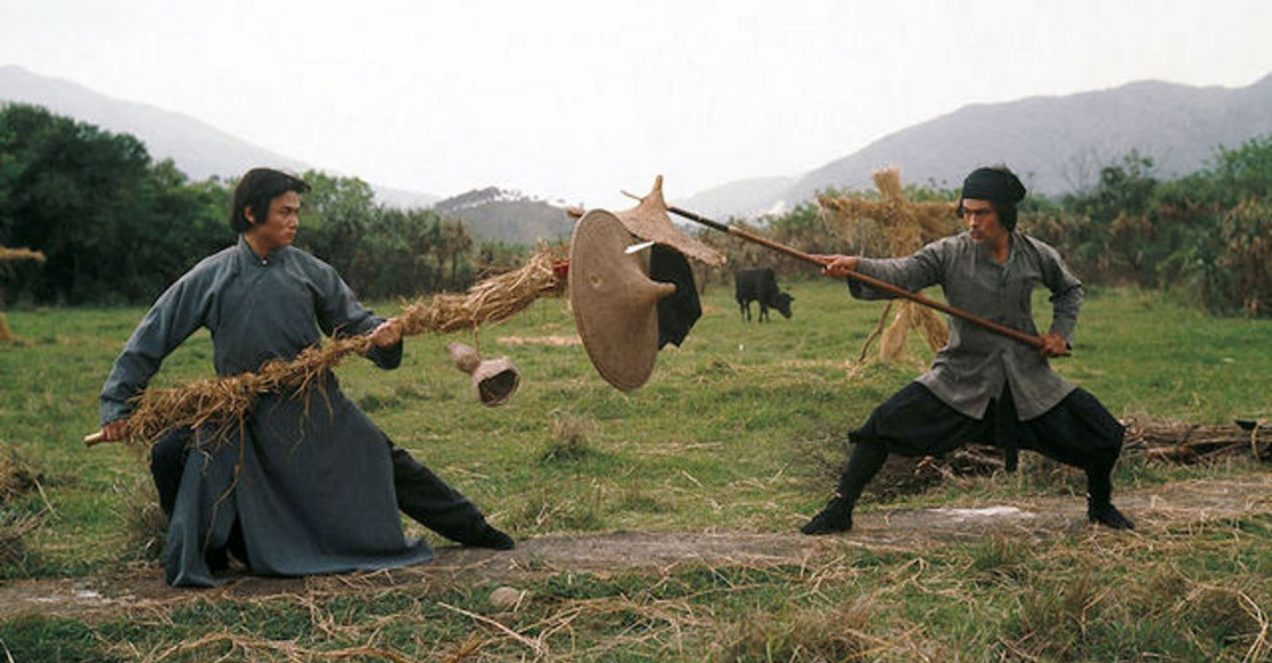 Nationalism is writ large in the history of Hong Kong cinema. And a big part of all this YAY China-ness was an expression of the ‘other’ – an enemy that was evil and treacherous and wanted to take away all that it was that made China so very China. For a long time after World War 2, including for 1970s Hong Kong cinema, Japan was that enemy. You can guarantee that if a film from that era featured a character from Japan, they would be a villain. No ifs, ands or buts about it. Think Fist of Fury if you want an example.

So it’s kind of ground-breaking that into this environment Lau Kar-Leung (The 36th Chamber of Shaolin, Mad Monkey Kung Fu, Drunken Master II) created a film where the Japanese characters had their own sense of honour, played fairly and weren’t one-dimensional super-villains intent on destroying everything the main character held dear.

Of course that’s not to say that race-relations in this film are perfect. Looking back on it with a 21st century eye we can still see problems and negative attitudes. But films aren’t made based around what people nearly forty years into the future might think of them, and this film isn’t a social-realism drama casting serious insights in to the issues and nor does it pretend to be.

So let’s ignore all that context and get to what this film is really about: fighting! And marriage! But mainly fighting!

Ah To (Gordon Liu, 36th Chamber of Shaolin, Legendary Weapons of China) is set up in an arranged marriage with the daughter of one of his dad’s Japanese business associates. At first he objects, but as soon as he sees Kung Zi (Yuko Mizuno, Diamond Fight) and realises she’s hot, he relents.

Unfortunately, marital bliss doesn’t last long for this couple. Things start off not great when during the wedding ceremony Kung Zi follows her own Japanese traditions to the ire of the Chinese guests and then head to worse when Ah To finds that, like himself, his wife also spends her days practicing martial arts. 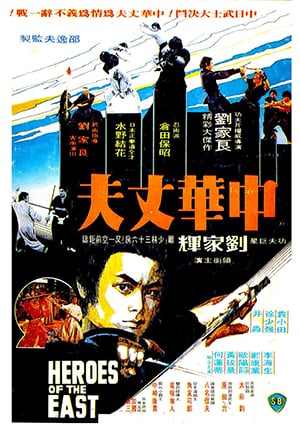 Only, these aren’t regular martial arts, these are, shock! horror!, un-lady-like Japanese martial arts. To be fair, she is destroying everything in her practice space though, and as that space happens to be their garden Ah To has genuine reason to complain over the knocked down walls and broken statues. In his conversation with her about this, Ah To makes the mistake of focusing much more on the former than the latter though and thus a state of enmity is born. The two end up challenging each other to a duel where they each use weapons from their respective countries to hit each other and disparage their opposites traditions. It’s all going swimmingly (i.e. with Ah To winning) until Kung Zi breaks out the ninjitsu, something Ah To sees as not honourable and has a go at her about.

Kung Zi has enough and leaves him to head home to Japan. At first Ah To sees this as a chance to kick back and relax but then, to the encouragement of his meddling servant Hsiao Kwan (Cheng Hong-Yip) he writes her a letter mocking all that is Japanese in the hopes she’ll be so angry that he’ll come back immediately to shout at him. The rest of the super-dumb plan is that once she’s back, he’ll explain the reasoning for the letter, they’ll talk it out and then live happily ever after.

So of course that’s not the way it goes. The mean letter instead falls into the hands of Takeno (Yasuaki Kurata, Fist of Legend), Kung Zi’s sensei who also seems personally fond of his pupil, and he takes it as an affront to all Japanese people. Takeno rounds up all the best fighters from his dojo, with each being a master of a specific Japanese fighting style – kendo, karate, nunchaku, spear, sai, judo and ninjitsu, and heads to China to accept the challenge that Ah To unintentionally laid down.

Ah To is naively shocked to find them all turn up on his doorstep but, long story short, agrees to fight one Japanese specialist a day, using a different style or weapon – swords, drunken boxing, crane style, spears and knives – to counteract his opponent. Excitingly, almost the last third of the film is spent watching these one on one matches unfold and it’s as no one cheats, the fights stay within agreed limits, they stick to the rules and no one dies that the ground-breaking-ness mentioned up top comes into play. Each fighter’s skill is treated with respect and so is each fighter. In fact, it’s only Ah To that (unintentionally) breaks the polite rules of the game. The less ground-breaking aspects (that won’t be revealed here for spoiler reasons) do become obvious though.

As a martial arts film, Heroes of the East offers up a smorgasbord of different fighting styles and weapons throughout, but the whole thing is so fast paced and zippy that nothing ever wears out its welcome or feels repetitive and redundant. There’s enough plot to tie the fights around so that they can come off as part of character development as well as standing on their own as impressive choreography expertly executed and filmed in ways that enhance the differences between each battle. The most inventive is the fictional crab fighting style employed by Takeno in his final showdown with Ah To (although Lau’s cameo as a drunken boxing expert comes close) which is all sideways shuffles and claw-hands. And talking of Ah To, the fights are a great showcase for Gordon Liu’s diverse kung fu skills and it’s a cool nod to The 36th Chamber of Shaolin to see him including three-sectioned staff work in this one too. It’s exciting to see Yuko Mizuno’s character get to play against him in the fighting pool.

Lau Kar-Leung has a delightful history of using strong female leads (think Kara Hui in My Young Auntie or Anita Mui in Drunken Master II) and this film certainly plays a part in that with Kung Zi not willing to cave on her traditions or behaviours simply to appease her husband. Although there are moments where she can get kind of shouty in her defence of her homeland, this is pretty much always justified by Ah To’s prudish dickishness and bias. We don’t really get to find out where they end up after the movie closes, but we’re left with the feeling that his growth in respect for other cultures and her protectiveness of her husband will lead to an eventual reconciliation.

The two leads look like they’re having a lot fun playing the bickering couple and convincingly portraying those seismic shifts in emotion when things turn nasty very quickly whilst still keeping the tone of the film very light. As the chief opponent, Yasuaki Kurata does great work in giving dimension to Takeno, making his actions easily understood and giving off just as an engaging a screen presence as Liu. That Lau allows all three to shine is a testament to his skills as a director.

This is one of the classics of martial arts cinema that’s still beloved today. Featuring so many different fighting styles, goofy shenanigans and healthy dose of shouting, this little story about pride zips along and entertains throughout. And maybe just breaks a little ground while it’s at it.

Heroes of the East is available to download or rent on iTunes, Google Play and YouTube. Shaw Brothers films are also now available on Netflix, and Amazon Prime (as English dubbed only).