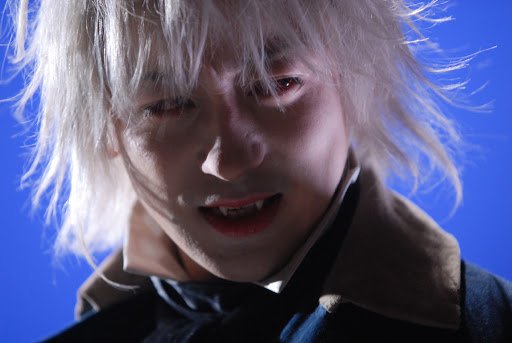 More teenagers having problems with our fanged friends of the night, but at least it’s not Twilight or The Vampire Diaries…

Akira (Hideo Ishiguro, Gokusen, Bushido Sixteen) is a likeable student but hardly top of the high school food chain, he and his friends inhabiting the nerdy, wimpy fat and weird end of the spectrum. One day trying to avoid bullies, an undeniably sexy but mysterious older woman Rei (Asami Mizukawa, Dark Water, Nodame Cantabile) offers him solace hiding in her hotel room. There’s a hint of the 80s, of Andrew McCarthy being seduced by Jacqueline Bisset, but before any of that can happen Rei reveals she knows the location of Akira’s older brother, missing some two years, on a remote uncharted island.

He also quickly finds out what’s been keeping him, as the place happens to be infested with vampires. Amazingly Akira’s friends agree to go with him to the island, only to find that it was all a big ruse and they are the bottom of a much more deadly food chain. When one of the friends is put forward for experimentation by a mad scientist from the undead, they quickly decide to break out. Soon Akira reunites with his brother (Dai Watanabe, son of Ken Watanabe) and finds him, understandably a changed man, having become cold and hard in order to survive.

Staying with a small group of survivors, Akira is determined to save his friend Yuki (Miori Takimoto) when she’s kidnapped by one of the scientist winged creations, and persuades their leader to help train him. There’s a hint of Star Wars as a blind folded Akira first proves himself useless with a sword, then suddenly becomes an expert. (Yeah, funny how that always happens.)

But will his newly found abilities and recent reuniting with his brother be enough to face the might of the vampire king Miyabi (Koji Yamamoto, Shinsengumi, The Last Of The 47 Ronin)?

South Korean director Kim Tae-gyum returns the ground that established him internationally with Volcano High, seemingly rather incongruous with his more recent work, Crossing, A Romance Of Their Own and the forthcoming Barefoot Dream. Despite obvious language complications, Tae-gyum keeps a strong reign on his actors performances, creating likable characters who you can’t help but care about.

Adapted from the best-selling and still ongoing manga series by Koji Matsumoto by screenwriter Oishi Tetsuya (whose relatively short but impressive cv includes the Death Note films, MW, One Missed Call and X-Cross) does a fair job of bringing the work to the screen. Even with the obvious simplification necessary to bring as a long-running series to one film, the film is still chock-a-block with references flying hither and thither.

The influence of Battle Royale is most obvious, with plucky young teens facing each other on an all-but inescapable island, as are various versions of H.G. Wells’ The Island Of Dr. Moreau, but the vampires here have as much to do with recent incarnations of zombies like 28 Days Later, with the slightest contact with their blood turning friends into blood thirsty enemies.

For me at least, there’s also a suggestion of those fabulously over-the-top 80s horror and vampire movies, like The Hidden and, in particularly, Vamp. (Which included a suitably scary and other-worldly performance by Grace Jones, if I remember rightly.)

Somehow the mix isn’t, in this form at least, sparklingly original. It is, however, tightly paced and enjoyable. Considering the amount of films making their way from the pages of comic books to the big screen, both in Asia and indeed in the West, Higanjima fares better than most. Fans may be disappointed by what’s been left out, but at least this adaptation doesn’t rely on your knowledge of the original manga to hint at wider themes. Nor does it rely on a sequel to complete the story, unlike Death Note (though it still manages to line up the possibility for one).

A likeable, if untaxing, take on a popular manga.

Higanjima – Escape From Vampire Island is released on DVD and Blu-ray by Manga Entertainment on Monday, 4 October.

We have no details about the DVD or Blu-ray release.