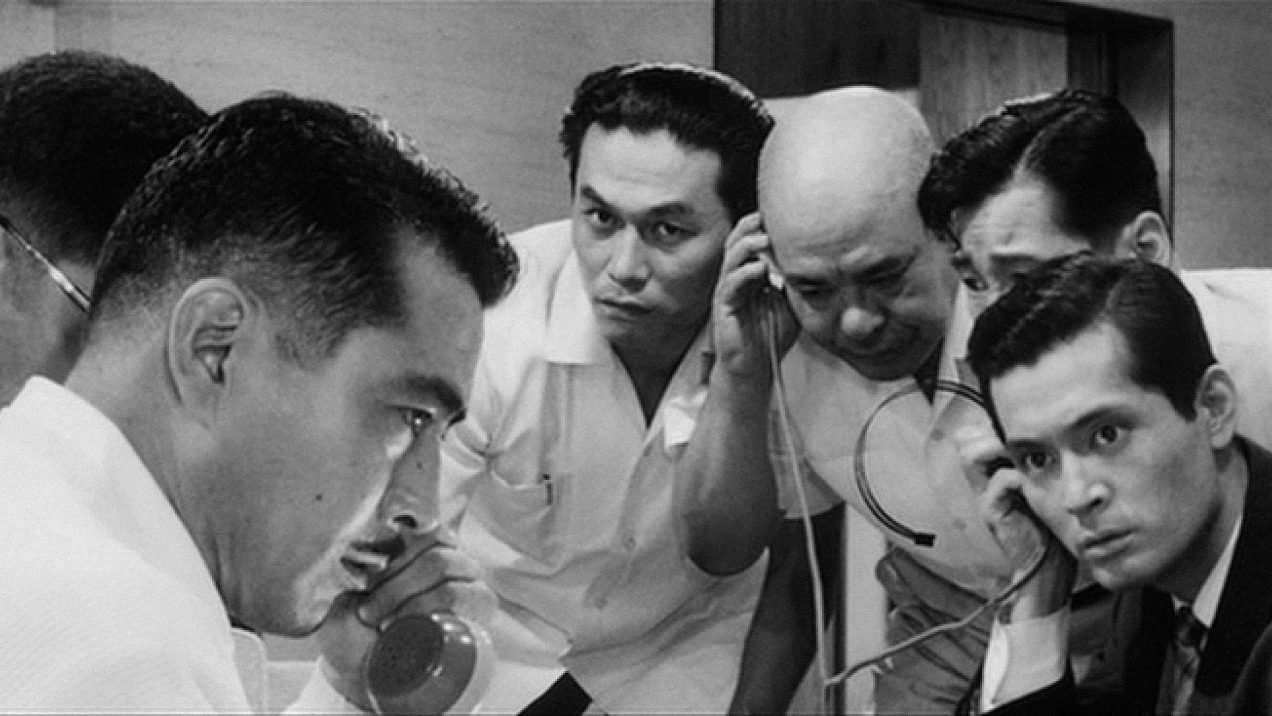 Positioned in many ways as a slow-burn Hollywood pot-boiling thriller, a classic kidnap/ransom caper mixing elements of comedy, tragedy, crime, and popcorn entertainment value, Akira Kurosawa’s masterwork High and Low is so much greater, so much denser and more layered than any genre-affirming nametags can justifiably describe. In the early sequences of the film, all taking place fully inside the posh air-conditioned living room of the modern castle owned by shoe-magnate Kingo Gondo, the position of characters with reference to the camera is a perfect representation of Kurosawa’s command of space as well as symbolic dramatization.

After Kingo Gondo finishes kicking out his contemporaries at National Shoes for trying to involve him in their scheme to unseat the company’s chairman (remnants of Kurosawa’s burning critique on soulless corporate corruption earlier in the decade with The Bad Sleep Well) he receives a call from an anonymous voice saying that his son has been kidnapped for ransom. It turns out however, the kidnapper mistook Gondo’s chauffer’s son (Shichin) for Gondo’s own (Jun). A missing child is a missing child… or is it? The ensuing dramatic moral chess-game involving Gondo, his wife, the chauffeur, Gondo’s company assistant, and the police, all first culminates from the secure and (previously) safe enclosure of Gondo’s luxurious house on top of the hill. It’s an exceptionally directed string of shots where the cinemascope plays to brilliant effect, each sequence positioning characters in different areas, between different people, all dependent on the construct of their relationship towards and amongst each other.

The tug-of-war ensuing within Gondo is brilliantly portrayed by Kurosawa faithful Toshiro Mifune, who in the previous three years of their collaboration (The Bad Sleep Well, Yojimbo, Sanjuro) portrayed the epitomic hero, the man with the plan, while here he is reduced to a hapless flustered mess being pulled from all sides. As Paul Attanasio of The Washington Post aptly compared, Kurosawa frames this story in the same way as his Macbeth adaptation Throne of Blood, wherein the central character’s haunting inner dilemma is fueled by the pleas of many different sources, namely his wife Reiko. There is, of course, a great deal of misogyny apparent in the way women are talked about by the men in this film, but ironically enough, it is Reiko who finally strikes the chord that sings with her husband. Luckily for Gondo, Reiko is not a conniving Lady Macbeth (his greedy assistant plays that part instead with little to no avail). She reminds Gondo of how willing he was to lose his entire fortune to retrieve his own son back from the kidnapper, but yet, now that it is his chauffer’s son, he remains hesitant.

Kurosawa constructs the narrative of the film as two stories merged into one. The first within the confines of Gondo’s house; posh, clean, rattled by an anonymous villain but still, featuring Gondo’s ability as a businessman to utilize money, strength and resources to bring a kidnapped child back to safety. You don’t have the guts to let the child die, Gondo-san are the words the kidnapper taunts through the phone before hanging up. Once the child is rescued, however, which happens early on and the rest of the film deals with the hunt to capture the kidnapper, the film moves almost a completely outside the mansion and into the great expanse of the seedy bottom-feeding areas of Tokyo. A cat and mouse chase of miscommunications, false leads, and rotten secrets amidst the wild expanse of unorganized alleys and hillside neighbourhoods bring the focus to the “real world”. It’s here that we finally see the significance of the title of the film, wherein the villain, Ginjiro, lives in a small shack-like apartment spying on the mansion through binoculars. As with many capitalist-based economic systems, the downsides of economic progression is that some will inevitably be left behind, and the clear dichotomy in social class between Ginjiro and Gondo is presented by Kurosawa through not only the physical location of their existences (Gondo on top of a hill, Ginjiro in the lowly valley), but also the expanse of their relationships and influence in society.

It’s sweltering down here, but you must be comfortable in your nice cool air conditioning remarks Ginjiro over the phone. It’s a mocking line because at that moment, the child is still missing, and Gondo is not comfortable at all, he is sweating and fumbling for an answer. While Ginjiro is a hidden, anonymous villain, his lower-class struggle is represented in the ways where he goads the high and mighty Gondo down to the level of the “forgotten” lower classes (again not just economically, but physically), to showcase vulnerability in spite of economic privilege.

In the end, both characters ask the same question: Why me? Gondo repeats this phrase multiple times trying to find the answer to picking him amongst all wealthy individuals to ransom money off of. In turn, Ginjiro’s plight and depravity must elicit the same question in regards to the misfortunes of his existence. Kurosawa’s film is time-tested and transcendent in its societal reach. The gargantuan inequality in both freedoms and basic needs between the haves and have-nots will inevitably force them to turn against one another is a truthful affirmation of capitalist disparity (During the films production and release, kidnapping was an epidemic in Tokyo, and Kurosawa’s own daughter was threatened to be kidnapped for ransom).

Kurosawa purposefully (and thankfully) changed the ending of the film from the ending of the book, which was tied in a neat little Hollywood-style bow. There are many more questions left unanswered here, and it aptly refuses to spell out any clear-cut or communicable motive for Ginjiro’s actions. We know the dichotomy between his and Gondo’s economic and social stature, but Ginjiro is a prideful individual. I called you here because I didn’t want you to think I went away crying and scared. The mix of face-value boldness, yet, an insecure and rather sad need that Ginjiro desperately has for Gondo’s acceptance of him as a “formidable foe” makes us uncomfortable in our attempt to interpret him. In any violent tragedy in America, we always have a debate about whether it’s important to care about the perpetrator’s motives or psychology. High and Low ends with this same debate, but not at a checkmate… it’s a stalemate, because Kurosawa knows that you can’t wrap neat bows on a tragedy. As Kingo Gondo sits befuddled while Ginjiro is taken away kicking and screaming by the police, his only thoughts (which he, in fact, relays to Ginjiro earlier in the conversation) mirror ours… Why must we hate each other?

High and Low is part of the Kurosawa strand of the BFI’s Japan 2020, available to stream on the BFI Player, with live screenings and events to come later in the year.

Soham Gadre
Soham Gadre is a writer/filmmaker in the Washington D.C. area. He has written for several publications including Hyperallergic, MUBI Notebook, Popula, Vague Visages, NANG, and Bustle among others.
Read all posts by Soham Gadre